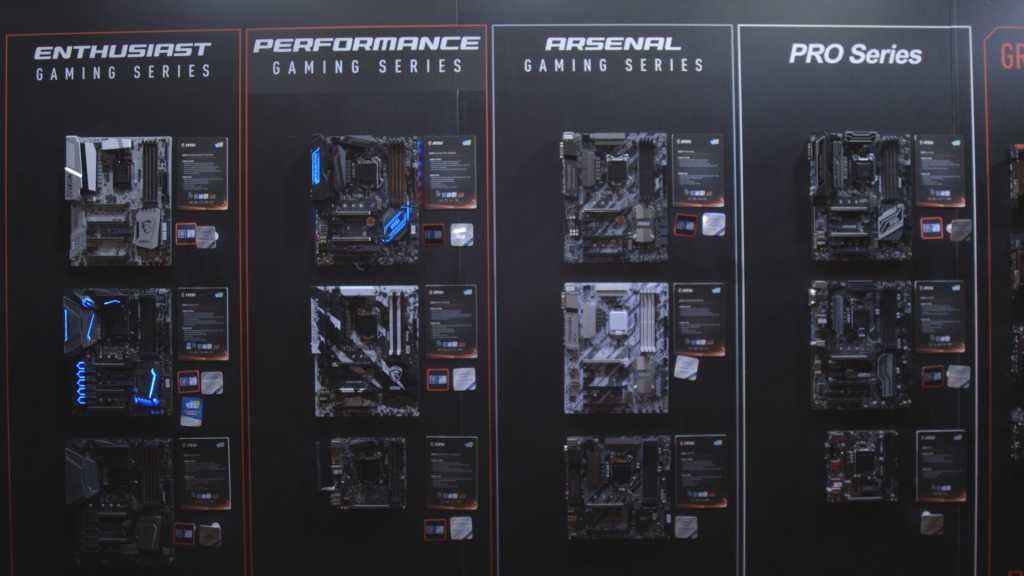 The “M” in “MSI” must stand for “motherboards,” because at CES 2017 the company launched more than 30 new mobos designed to work with Intel’s just-dropped Kaby Lake desktop processors. Thirty. Kaby. Lake. Motherboards.

But a pair of motherboards tucked away at the end of the display proved just as exciting—the first desktop AM4 motherboards for AMD’s hotly anticipated Ryzen processors and Bristol Ridge APUs that I’ve ever seen in the wild.

Sure, it was a bit anticlimactic since AMD announced an army of AM4 motherboards mere hours later, but it was still good to see a Ryzen motherboard in the proverbial flesh, hanging toe-to-toe with its high-end Kaby Lake counterpart.

The MSI X370 Xpower Gaming Titanium (which gets its name from the AM4 X370 chipset) mirrors MSI’s Titanium Z270 motherboard for Kaby Lake in many ways, right down to debuts never before seen in an AMD motherboard, such as DDR4 RAM and MSI’s own one-click “Game Boost” button, which automatically overclocks your games for enhanced performance. The X370 board also supports U.2 and M.2 SSDs, up to three graphics cards, USB 3 ports galore, and more—though it lacks the unique “M.2 Shield” found on some high-end MSI motherboards to protect against potential damage and bring down SSD temps just a wee bit.

The MSI B350 Tomahawk is based on AMD’s toned-down B350 chipset for Bristol Ridge APUs, so it lacks some of the X370 board’s bells and whistles. The Tomahawk doesn’t include a U.2 slot, for example, and only a single M.2 SSD vs the Titanium’s two. Bristol Ridge APUs have only been available in pre-built systems up until now, however, so it’s nice that discrete desktop components are starting to trickle out to the streets.

But the real meat in MSI’s booth was the legion of Kaby Lake motherboards. All 30-plus weren’t on show, but a healthy number of them were. MSI splits its motherboards up into several series, with several models in each.

The Enthusiast Gaming series packs all the bells and whistles you can ask for, from the aforementioned exotic SSDs and one-push Game Boost to refined heat sinks and support for as many graphics cards as you can throw at them. (Okay, up to three or four.) The highlight of this class is the Z270 Gaming M7 (which actually won a CES 2017 Innovation Award for its design), resembling the aggressive, angular look of an alien ship. Nasty, shooty aliens, too—not nice ones. But the motherboard sure looks purdy!

Right below that is the Performance Gaming series. These motherboards pack most of the same features of the Enthusiast Gaming motherboards, but may be missing a feature or two, and they sport more in-your-face “gamer”-style designs. That goes doubly so for the Z270 Krait Gaming motherboard pictured above, which MSI designed to fit in more color neutral cases where flashy colors just wouldn’t fit. One particularly interesting tidbit: MSI dips the PCI-E brackets for the Krait Gaming motherboard into a sort of liquid paint that leaves each one with a unique, camouflage-like look. No two are alike.

Finally—barring business-centric models that we aren’t focused on here—you’ll find the Arsenal Gaming series. It’s awfully similar to the Performance Gaming series, but with an aesthetic design inspired by tank treads. If you look at the collective picture of MSI’s Kaby Lake motherboards at the top of this page, you’ll notice that all the Arsenal models appear to have been driven over by tanks. That’s intentional!