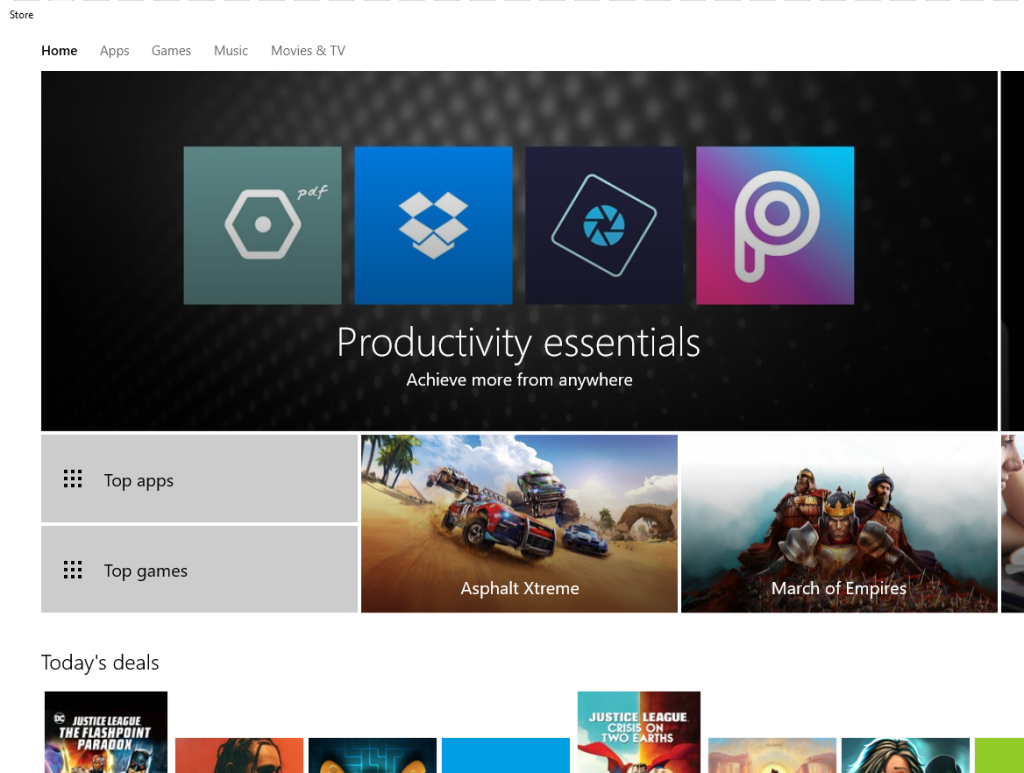 For years, Microsoft has sold movies, TV shows, and music, in addition to apps—but not ebooks. A leaked Windows 10 build, however, shows Microsoft plans to shore up that gap in an upcoming release.

The leaked build obtained by MSPowerUser reveals a dedicated section of the Windows Store where Microsoft plans to sell ebooks alongside its other content. According to the site, there doesn’t seem to be a dedicated Books app yet, just integration with Microsoft’s Edge browser, which will serve as the viewer application for the new ebooks.

Microsoft declined to confirm the new Books section, but a representative seemed to imply that new information could be coming soon. “The Windows Insider Program was created to enable Microsoft to test different features and functionality which will influence future versions of Windows,” the representative said in an emailed statement. “We regularly test new features and changes to existing features to see what resonates well with our fans. Stay tuned for more information soon.”

Why this matters: If it’s going to succeed as a content provider, Microsoft simply has to have a presence in the ebook market. Whether it succeeds is, for now, irrelevant. Microsoft’s online storefronts aren’t much to write home about, but the Xbox Store is successful, and Microsoft’s Groove Music subscription isn’t bad, either. Microsoft will need to carve out its own niche, however: establish a solid technical library, perhaps, or develop an uber-subscription of some sort, incorporating Groove Music, Office 365, Skype, and a new ebook subscription. Microsoft Work and Play 2.0, perhaps?

Microsoft has been easing its way toward ebooks. As MSPowerUser notes, Microsoft began adding support for the EPUB ebook format last year to Edge, paving the way for the new addition to the Store. You’ll be able to change the size and font of the text as well as add your own bookmarks. It remains to be seen, though, whether you’ll be able to pick up right where you left off when shifting from your phone to your PC and back again, as apps like Amazon’s e-reader do. A listing page shows both PC and mobile support for the ebooks, though, as you’d expect.

Microsoft clearly has its work cut out for it. Amazon has been virtually synonomous with ebooks for years, currently offering 10.9 million titles. Its Kindle Unlimited subscription makes over 1.4 million ebooks available to users for $10 per month, while Amazon Prime subscribers have access to “thousands.” Apple’s iBooks Store and the ebook section of Google Play also offer their own bookstores—with many offering free or discounted ebooks to lure new subscribers.

The leaked screenshots, if accurate, indicate that Microsoft has more modest goals. There’s no indication that Microsoft plans a comparable ebook subscription—in fact, there don’t seem to be any discounted listings at all. Basically, the Books portion of the Store appears to be organized in the familiar “Top Books,” “My Books,” and “Featured Collections” structure that’s typical of other areas within the Store. Right now, there’s no indication as to how many books Microsoft plans to sell, either.

It all adds up to one conclusion: At this point, Microsoft plans to dip its toe into the ebook market, rather than make a splash.