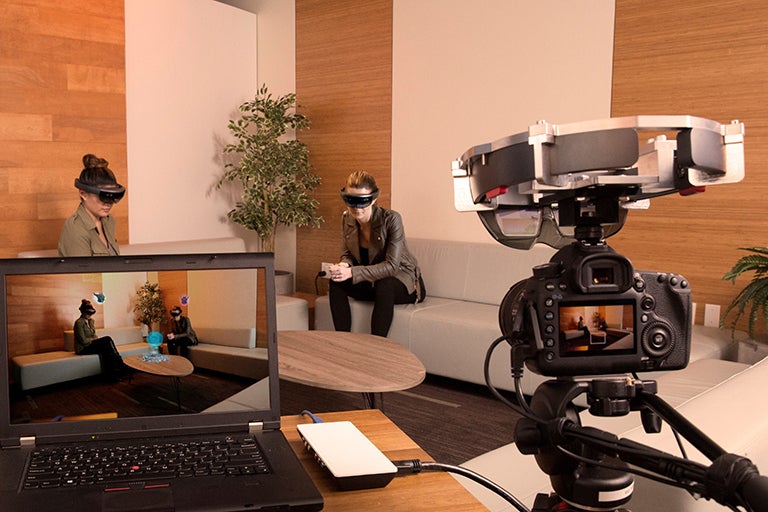 When Microsoft first unveiled its HoloLens augmented reality headgear, the company used a special camera to show viewers third-person images of the digital objects being rendered in the headset.

Now, anyone who owns two HoloLenses can recreate the same setup, thanks to a project that Microsoft released on Monday. Called Spectator View, it lets users sync up information from a HoloLens about where augmented reality objects are and what they look like with footage from a camera. Using that makes it possible to create a third-person view of augmented reality action.

Up until this point, most of the folks who had access to HoloLenses outside of Microsoft were only able to capture scenes from the first person perspective of someone wearing one of the headsets. By releasing these tools to the world, Microsoft has given businesses starting to work with the HoloLens a new way to show off what they’re doing.

The tools that Microsoft released are designed to help developers capture still images, video for pre-recorded segments, and even live-streaming footage with overlaid holograms like Microsoft uses in its stage presentations.

To create a Spectator View rig, users need a HoloLens, a camera with HDMI output, special mounting brackets, and a capture card. The rig is constructed by disconnecting the HoloLens from the headband that usually connects it to a person and mounting it to the brackets, then syncing up its information with the visual output from the camera using software that Microsoft released Monday.

Capturing the contents of a HoloLens app using the rig requires an application that’s designed to be used by multiple people over a network. Microsoft’s SDK supports such shared experiences, which require tracking the position of networked application users and the position of objects that they’re looking at.

On top of that, the Spectator View rig needs to be calibrated in order to work, so that the software powering it can sync up the difference in position and field of view between the camera’s lens and the HoloLens.

This isn’t a project for the faint of heart. Microsoft isn’t selling the custom-designed mounting brackets. Instead, the company requires anyone who wants to build a Spectator Mode rig to 3D print his own brackets.

However, it allows HoloLens customers a new way to highlight their creations, which is important for businesses that want to show off the work that they’re doing with the device. CapitalOne, for example, has been experimenting with how it can use the HoloLens with bank customers inside its brick-and-mortar branches.