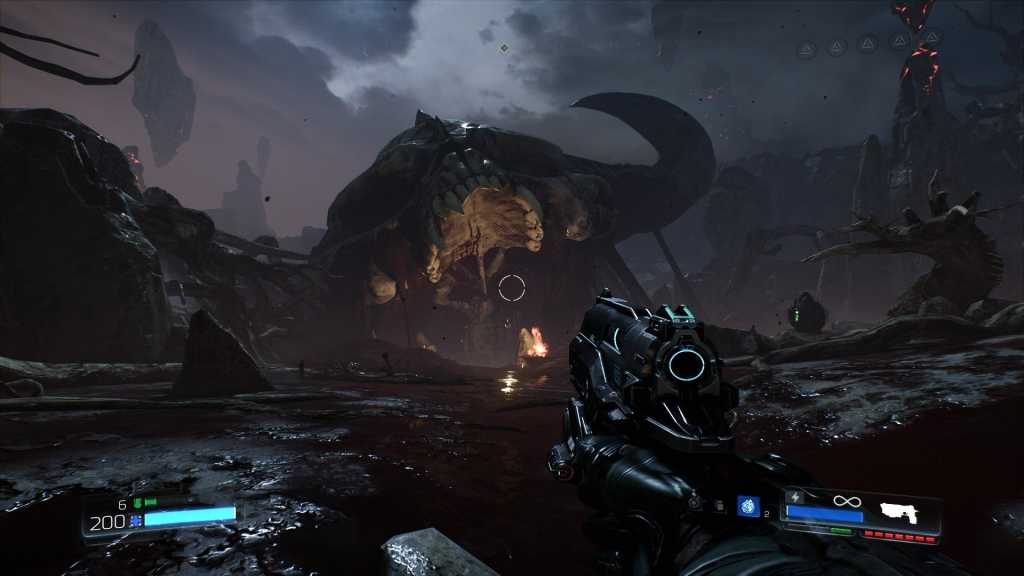 Doom in 2016 is pretty much the same as Doom in 1994—big arenas, lots of guns, waves of demons, and a generous helping of gibs.

You’re on Mars. There are demons. The demons need to die.

That’s it. That’s all the story you need, and it’s pretty much all the story you’re getting. This is Doom in 2016—not done up like Wolfenstein: The New Order, artfully blending the absurdity of ‘90s shooters with modern-day storytelling and bombast, but just straight-up Doom.

Big arenas, lots of guns, waves of demons, wailing guitar solos, and so much in-your-face violence that your own eyes might start bleeding by the end. Hell, there isn’t even a button for reloading your guns.

If it bleeds we can kill it

And the crazy part is? It works. Doom (available for $60 on Amazon) joins the likes of Rise of the Triad and Shadow Warrior, resurrecting long-buried arena shooter design for a generation that’s grown accustomed to regenerating health and the trappings of “realism.”

It’s a pulsing rhythm of Corridor-Arena-Corridor-Arena, repeated a hundred times in a hundred places. Demons appear, you shoot them until they’re dead. And in service of that goal? A dozen or so weapons, which you carry around old-style in a bottomless magical backpack.

You’ve got your laser pistol, your shotgun, your heavy assault rifle, your rocket launcher, your bigger shotgun, and more than a few others—plus the iconic BFG, of course—and you sort of sprint around like a demented pinball, jumping and double-jumping and lining up Kodak Moment™ headshots.

I’d call it zen, except for the fact the results are bloody and chaotic. This is a game where you rip out a demon’s heart and force it still beating down his (her?) throat, and then it explodes. When the so-called Barons of Hell arrive—twelve-foot tall minotaurs—you rip off their horns so as to impale them.

Imagine if you showed this game to the same people who fretted about violence in the original Doom.

But it’s all so silly. I don’t know. Doubtless there will be some who will push away their half-eaten meal of gibs and blood splatters and say “I can’t. This is too much.” Me? I put it in the same box as Mortal Kombat. It’s theater of the absurd or cartoon violence, the (much) bloodier acquaintance of Tom and Jerry.

And despite seeming like nothing more than shallow pandering to your lizard-brain, the violence here is actually a smart piece of design—a core part of the pacing, in fact. Doom’s bloodiest moments are tied to a new “Glory Kill” system. You shoot demons until they’re staggered, then you run up and melee-kill them in the most gruesome fashion possible.

It keeps the game moving. Getting in close isn’t just recommended, it’s required, which means you’re constantly dodging and strafing and leaping from target to target. Shoot a Cacodemon, then punch out its eyeball. Shoot an Imp, then stomp on its head. Shoot a Hell Knight, then wring its neck. And et cetera. Stop to think and you’re dead.

That’s in direct contrast to modern shooters, where you’re innately fragile and spend most of your time cowering behind cover and popping off shots at vaguely-head-shaped pixels a half-mile away. Which is not to say those shooters hold no appeal. It’s just different. Slower.

Unfortunately Doom’s pacing ends up being its own worst enemy. The game flies like a bat out of (into?) hell and does a damn fine job of it until about two-thirds of the way through the twelve hour campaign, at which point it just…runs out of surprises.

You start to realize you’ve seen every enemy, seen every environment. The levels, which early on are massive and branching, become more and more linear and pack fewer secrets.

And by the end, Doom sacrifices its excellent pacing on the altar of larger arenas and increasing waves of enemies. The last levels are a shadow of the opening half, full of drawn-out engagements and few corridors to prod. A fully-decked arsenal will still chew through waves of enemies, but it’s not quite as satisfying when a dozen more show up shortly thereafter.

We can’t talk Doom without also talking about id Tech. Long story short: It’s incredible. Last week I mentioned I was seeing over 100 frames per second on a GeForce GTX 980 Ti at 1080p/Ultra, and those numbers held true for pretty much the entire game. Given how good it looks, I’m amazed.

I don’t expect id Tech to make a huge resurgence. Unreal has pretty much cemented its hold over most non-proprietary studios, with Unity taking the remainder. Even if id Tech is easy to work with, I don’t see it gaining a foothold.

But damn, does it look fantastic. Granted, it’s in service of creating battered industrial platforms and barren hellscapes, but still: Wow.

Ugh, whatever. It’s there if you want to play it, but it’s nowhere near as good as the single-player game. Like every other game in the series, you shouldn’t buy Doom solely for its multiplayer.

It may not be as influential or creative as either the original Doom or Doom 3—which, although it hasn’t aged well, ushered in a dozen monster-closet copycats. Still, Doom in 2016 is successful because it knows it’s dumb and leans into the fact. There are no pretensions towards artistry here, no delusions of grandeur. It’s a popcorn flick where the main character can only speak in gunshots.