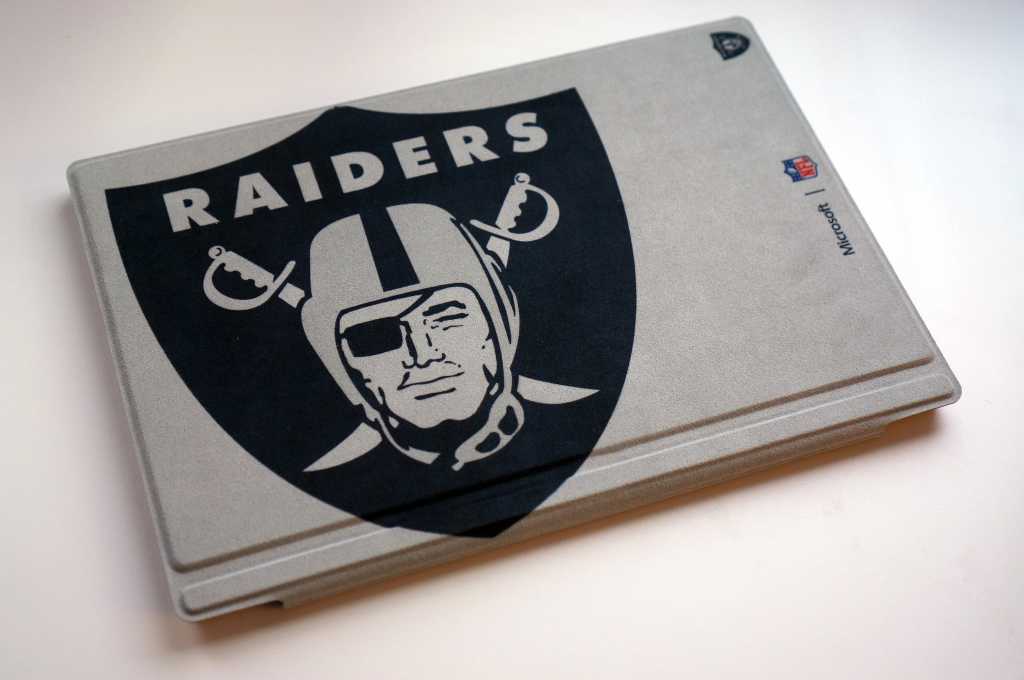 Few tech products in this world warrant a voiceover from late NFL Films narrator John Facenda, but we’ll make an exception for Microsoft’s Special Edition NFL Type Cover, which seems deserving of the “voice of god.”

As the name implies, the NFL Type Cover is basically a standard Surface Pro 4 Type Cover with an officially licensed NFL team logo printed on the back. All 32 team logos are offered, including the generic Cleveland Browns (sorry, Cleveland.)

As the NFL is basically a money-printing machine, the cost to get your team logo isn’t cheap.  A standard Type Cover can be found for as little as $101 on Amazon. A Type Cover with the nifty integrated fingerprint reader for Windows Hello is $135. The NFL Special Edition Type Cover will set you back $159. Ouch.

That makes it as expensive as Microsoft’s fancy Signature Type Cover, and that’s made with a luxury material we can’t even pronounce called Alcantara. So yeah, you’re paying for some player’s Cadillac Escalade and for an owner’s private jet, but at least you’ve got team spirit.

I do take issue with the design choice of the NFL Type Cover. Each team’s logo is placed on the back of the Type Cover and is offset, so it covers the fold.

Maybe it’s me or my lack of design aesthetics, but I would prefer to see the entire logo on the back and centered. The logo itself is also only on the back the NFL Type Cover. When you’re using your Surface, the logo is hidden. That’s a big problem if you’re a Denver Broncos fan and you want to troll Panthers fans while you sit in a cafe in Charlotte, North Carolina.

If you’re rolling a Surface Pro 4 and its included keyboard, the only thing you get out of this is a fresh keyboard and team pride. For superfans, that’s worth it. For others, it’s a steep price price to pay when you could just put a $3 sticker on your current Type Cover keyboard. The NFL Type Cover lacks a fingerprint reader option, too.

I think the NFL Type Cover will appeal far more to the Surface Pro 3 user. The Surface Pro 3 and Pro 4 share the same keyboard dimensions, so the cover’s fully interchangeable.

Having used the Surface Pro 3 for a year, I considered its keyboard to be the standard that other tablet keyboards should strive for. After using the NFL Type Cover, I realize the bar has been raised. With the NFL Type Cover’s better key pitch, and tighter, less rattle-prone keys, I found myself making far few typos. The trackpad is larger and feels smoother, too—a big improvement.

At this point, I don’t think I could ever go back to the Surface 3 Type Cover, even though a brand-new one is less than a third of the price of the NFL Type Cover.

If you go this route, just remember there’s no pen loop with the NFL Type Cover because it’s made for the loop-equipped Surface Pro 4, so you’ll have to buy an optional pen loop for $5.

At $159, the NFL Special Edition Type Cover isn’t cheap. To be fair, nothing that has a licensed NFL logo ever is. It’s worth considering for Surface Pro 4 users who are NFL superfans, because they won’t mind the cost or the lack of extra functionality (like a fingerprint reader).

For the Surface Pro 3 user though, it’s something to strongly consider. By now, after a year or two of use, your Surface Pro 3 keyboard is probably as janky as mine. An upgrade to the NFL Type Cover breathes more life into the still-usable Surface Pro 3 and lets you represent at the same time.