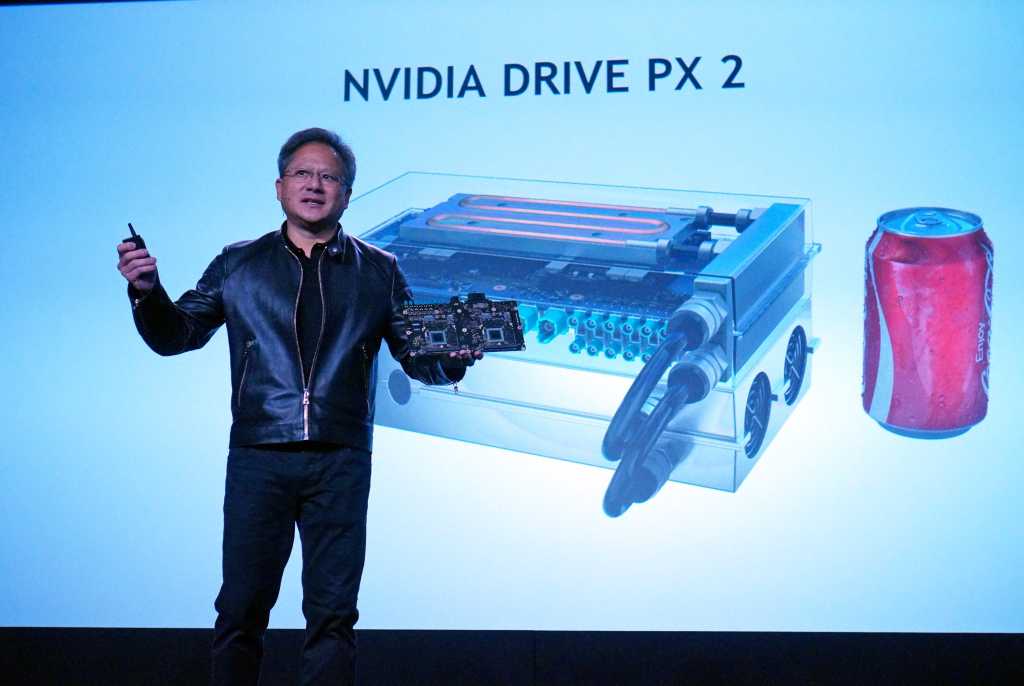 ”Nvidia’s GPU is central to advances in deep learning and supercomputing,” said Nvidia CEO Jen-Hsun Huang. “We are leveraging these to create the brain of future autonomous vehicles that will be continuously alert, and eventually achieve superhuman levels of situational awareness.”

Huang said the new Drive PX 2 would pack two next-generation Tegra CPUs as well as two next-gen Pascal GPUs, and be built on a 16nm FinFET process. That would give it four times the computational power of the original Drive PX module announced last year.

Why the need for so much power? The company said it’s necessary to make truly capable self-driving cars that can deal with the chaotic driving conditions a typical driver might face on the road. Drive PX 2 can simultaneously analyze the feeds from 12 cameras plus multiple LIDAR, radar, and other sensors.

If that sounds like a lot of data to analyze in real time, it is—and that’s why Nvidia said it gave it 8 teraflops of performance, or 24 deep-learning TOPs or trillions of operations per second.

Pat Moorhead, principal analyst at Moor Insights and Strategy, said Nvidia does have a performance edge.

”First, the entire industry underestimated the amount of processing power to successfully run a self driving car. They did this because they underestimated the amount of data points,” Moorhead said. “Nvidia has an advantage here because DNN, or deep neural networks, running on GPUs were required for proper object detection, recognition, and response. DSPs and FPGAs are trying to catch up in this space. Back of the envelope calculations, I think PX 2 has the right level of performance but will need to get significantly lower in power to be reliably fan cooled in the most adverse and hot environments.”

Nvidia has no plans to make its own cars, instead, it will offer the module to car companies who don’t want to or can’t reinvent the wheel or compete with tech giants who are pouring money into it.

“All you need is ethernet, power cables, cam bus, and you have a self-driving supercomputer that fits nicely in your trunk, instead of what you see in today’s self-driving vehicle prototypes filled with computers in back,” Huang said. “It’s just one nice little lunch box in back and it’s a supercomputer.”

Nvidia said it already has one taker with Volvo, who will integrate a Drive PX 2 into an upcoming car.