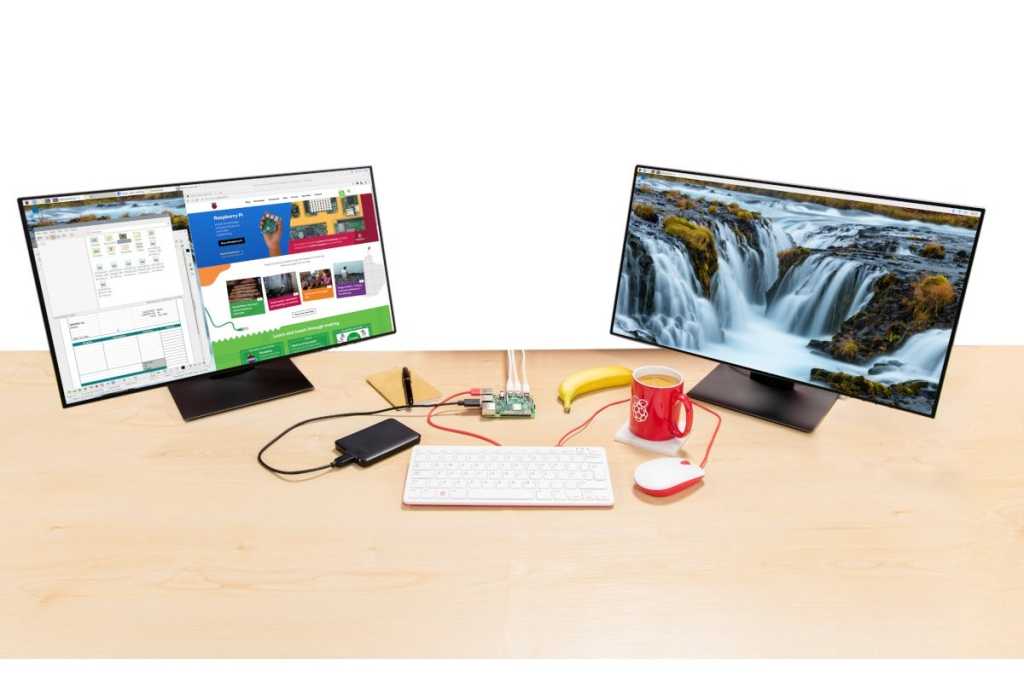 The Raspberry Pi single-board computer and all its variants have captured the imaginations of DIY enthusiasts and budding hobbyists alike, even though it hasn’t been immune to the chip crunch. And now that an 8GB model with as much RAM as a Mac Mini is here, interest in building with the board is sure to spike.

Much of the coverage you’ll see around the web focuses on the more fantastical projects—magic mirrors, portable gaming handhelds, intelligent drones, and so forth. And for good reason! Those maker masterpieces show what sort of power the $35 mini-PC is capable of in the hands of someone with a little imagination and a bin full of spare electronics, especially now that the Raspberry Pi 4 includes more RAM, a huge CPU upgrade, USB-C charging, and enough graphics horsepower to drive a pair of 4K monitors simultaneously.

But most people, particularly beginners, won’t use the Raspberry Pi to whip up crazy creations. There are near-endless practical uses for this bare-bones kit, from media streaming to extending the range of your Wi-Fi network, as the following 10 projects demonstrate. Time to put that $35 computer to real work. Heck, many of these will work just fine even on the $5 Raspberry Pi Zero.

Editor’s note: This article is updated periodically to include new info, most recently to resurface these projects for Pi day (3/14) and acknowledge higher Raspberry Pi 4 prices from the ongoing chip shortage.

The original $35 Raspberry Pi may have been revolutionary to makers, but it took off with PC enthusiasts as well thanks to its ability to double as a dirt-cheap home-theater PC. That allure may have waned a bit in recent years as dedicated devices like the Chromecast hit the streets at similarly low prices, but using a Raspberry Pi as a media-streaming box still offers far more power than those streaming-centric sticks, especially if you have a sizeable local media collection.

There are a slew of HTPC-centric Raspberry Pi operating systems out there, each revolving around slapping your HD videos on the big screen. OSMC is built around the popular Kodi media center software (formerly XBMC), while RasPlex transforms your Pi into the ultimate Plex streaming box. The $21 Raspberry Pi TV Hat accessory, meanwhile, can grant your mini-PC the ability to read over-the-air TV signals.

Give a dumb TV smarts

Likewise, if you have a dumb TV that you’d like to add web browsing and other basic computing abilities to, the Raspberry Pi does the trick without costing anywhere near as much as a Chromebit or Windows-powered Compute Stick. You’ll want to use a Raspberry Pi 2, 3, or 4, though—the original Pi and the Raspberry Pi Zero are just pokey enough to be frustrating for general tasks. With the right case, the Pi can look downright stylish in your home theater, too.

Bonus: If you’re connecting the Raspberry Pi to your TV, you can use it to stream web videos, too!

You can also have your Raspberry Pi play wingman for the other devices in your house, serving as a centralized device that performs helpful tasks.

Case in point: You can use the mini-PC as a cheap NAS box for general file storage if you connect an external USB hard drive to the machine. Hit those links for technical details, and one tip if you’re planning to convert the computer to a file server: Use a wired ethernet connection rather than Wi-Fi if you’re able.

Printing isn’t as prevalent as it used to be, but the Raspberry Pi can help you transform that chunky old USB printer in your closet into a networked printer that every device in your house can use.

You’ll need a power source for each gadget, obviously, as well as a USB connection between the devices, but setting it up is pretty straightforward. This MakeUseOf tutorial walks you through the process step-by-step.

Configuring the device to bolster your home network will take a bit of time, and you’ll need to buy a USB Wi-Fi adapter to do it, but again, it’s relatively straightforward with a guide. Check out Adafruit’s reader-friendly tutorial.

Gaming emulators are a legal gray area, but there’s no doubt that using the Raspberry Pi as a butt-kicking console emulator is a popular use for the machines. It can play games from a wide variety of consoles right on up to the PlayStation 1 era if you manage to snag some legal game ROMs, though the older the system being emulated, the better the performance.

Curious? Check out PCWorld’s complete guide to turning your Raspberry Pi into a retro gaming console for the full scoop.

The Raspberry Pi’s media chops aren’t limited to video streaming alone. Numerous operating systems have also been released that transform the device into a high-fidelity music player when connected to a speaker, sort of like a more powerful, flexible version of Chromecast Audio.

The various music-oriented OSes available offer different features; poke around the FAQs and features of each to see which is right for your needs. Here are tutorials on how to have your Raspberry Pi turn dumb speakers into smart music solutions with Volumio and Rune Audio (pictured), both of which offer mobile apps so you can control your tunes with your phone.

You could always use the Raspberry Pi as it was originally intended, too: As a low-cost introduction to programming and computer science. The mini-PC’s loaded with all sorts of software that encourages deep-level tinkering.

Beyond the command-line terminal, you’ll need to wade in often, you’ll also find versions of Wolfram Mathematica, Python program creation tools, and Scratch, an animation coding IDE for kids, in the Raspbian operating system that the Raspberry Pi Foundation encourages new users to install. Get smart!

Or you could play Minecraft. There’s a free Raspberry Pi version of Minecraft that anybody can download at no cost. Even better, it’s designed to teach you how to use the Python programming language as you build out the world. (Hey, Microsoft CEO Satya Nadella did say that part of the reason the company purchased Mojang was to lure kids into computer science.)

Download Minecraft: Pi Edition and jump in with this helpful tutorial.

With options of 2GB, 4GB, and now 8GB models, the Raspberry Pi 4 packs a heftier punch than previous RPi iterations—making it suitable for basic everyday tasks like web browsing, watching video streams, and document editing. Setting up one as a PC goes fast, too, with the bulk of the hour setup time devoted to waiting for the operating system installation to complete.

As a starter or secondary computer, it’s hard to beat, especially given its build cost of $100 (or even less, if you opt for the 2GB version and not the 4GB). Check out PCWorld’s full guide in how to put together a $100 Raspberry Pi PC for everything you’ll need.

Let’s finish where we began. Once you’ve wrapped your head around the Raspberry Pi’s potential, why not try your hand at one of those awe-inspiring inventive projects? PCWorld’s look at 10 insanely innovative, incredibly cool Raspberry Pi creations can help with the inspiration, while the project guides at Instructables, Hackaday, and the Raspberry Pi Foundation website itself are ready to walk you step-by-step through the really awesome stuff like the magic mirror above.

Also check out our roundup of the best Raspberry Pi kits. Whether you’re a newbie who just wants to get all the basics with one purchase, or an experienced tinkerer looking to build a specialized project, a kit could be the way to go.