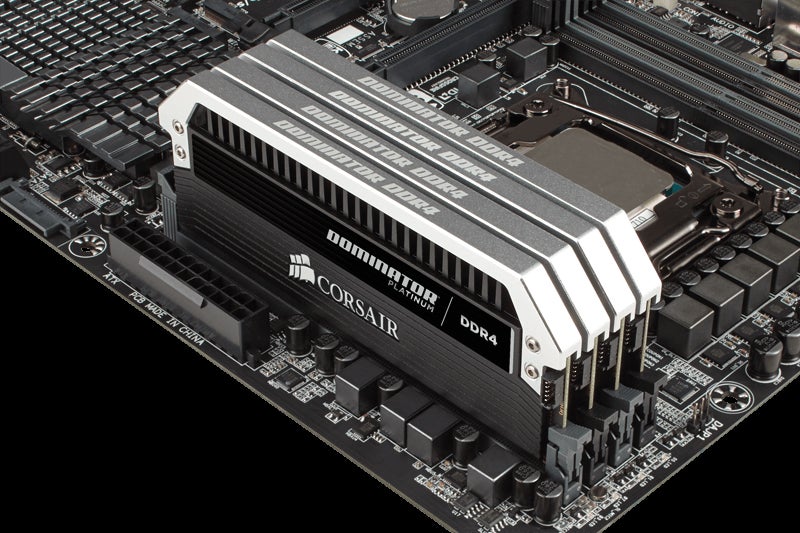 One of the check-off features of Intel’s big Haswell-E CPU is support for quad-channel DDR4 memory, but my testing shows it may not matter much.

Normally this doesn’t matter. You wouldn’t buy an expensive X99 motherboard and pricey Core i7-5960X, then intentionally gimp its quad-channel memory performance by installing only two pieces of RAM instead of four.

Asrock’s crazy solution was simply to leave off two of the slots on its X99E-ITX/ac motherboard. Yes, that cuts your bandwidth in half, but it lets you build such crazy machines as this Falcon Northwest or this exotic CyberPower Trinity Xtreme and run more than four CPU cores. The big question is: How much of a hit do you take?

I decided to test just how much real performance you give up by leaving half your system bandwidth behind, As the Asrock X99E-ITX/ac is permanently restricted to dual-channel memory, the only way I could test this was to use a full-size X99 motherboard.

Nope. This chart is probably the only good news for quad-channel memory, but I’ll let you bask in the bandwidth for now. Read on for the real performance impact.

Synthetic tests measuring the theoretical performance is one thing, but just where does it show up in real tasks? To find out, the next test I threw at the system was Handbrake. A popular and free video encoder, it’s a CPU-heavy test. As video encoding is something that’s believed to be bandwidth-sensitive, I thought doubling the memory bandwidth would pay off big-time. Unfortunately, if you look at the chart below, I saw zippo. I was quite surprised, as I’ve long believed memory bandwidth helps encoding performance. I’ve actually seen it in the past on older hardware platforms, too, so this was a shocker. I will say: This isn’t the last word, as different encoders and different encoding loads could favor the increased bandwidth. But today, I’m pretty disappointed.

My next task was PCMark 8’s Creative Conventional test. This synthetic test attempts to simulate a workload of photo editing, video encoding, light gaming and browsing. I run the conventional portion rather than the GPU portion to keep the workload restricted to the CPU itself. The result was, again, pretty surprising and disappointing.

I also ran PCMark 8’s Home and Work Conventional tasks to change up the workload. Again, nearly double the system memory bandwidth made no difference. I’m not even going to bother wasting Internet bandwidth with the chart of PCMark 8 Work’s result, because it’s the same.

Like video encoding, file compression is one of the tasks that typically benefits from boatloads of memory bandwidth. To find out, I reached for WinRAR 5.21 and used its built-in compression benchmark. Finally I saw the increased memory bandwidth paying off—but not by much.

I also fired up the beta version of 7Zip and ran its internal benchmark. I actually saw a decent boost from 7Zip, but again, I really expected more. I was almost ready to hang it up but decided to run some gaming tests, too, so keep reading.

For the final set of tests, I fired up a few games that aren’t on the cutting-edge of graphics. The idea is to use older games that would not be bottlenecked by the GeForce GTX 970 in my testbed. It’s a good card and a hell of a deal, but it’s no Titan X. To remove any graphics bottleneck, I also ran the games at a fairly low resolution of 1920×1080, and picked lower image quality settings.

The result? Yup. You guessed it: No diff. Not at ultimate or high. Just squint your eyes and pretend the results are for both.

And yes, BioShock Infinite didn’t care either, even when pushing 200 fps. Like Tomb Raider, I actually ran the test at high and medium settings but decided not to waste bandwidth since it didn’t matter.

And yes, more of the same in Dirt Showdown. There’s no reason to show you the three other settings I ran, because they’re all just the same. Read on for my conclusion.

I’ve written about Asrock’s interesting decision to sacrifice memory bandwidth for core count a few times now. The reaction is usually to recoil from those who just don’t want to make that compromise in memory bandwidth. Give up half your memory bandwidth just to make a smaller system with six or eight cores? Never!

I had the same reaction myself originally. After running my tests though, I’m not sure it matters. I’m sure that somewhere out there beneath the pale moonlight, there’s a task or benchmark that truly pays the dividends you’d expect by doubling the available system bandwidth, but I’m not seeing it here.

Why? I suspect one reason might be the massive 15MB cache in the 6-core Core i7-5820K processor I used. The quad-core Core i7-4790K has an 8MB cache. That’s almost double the cache with only two more cores added to the equation. Could going to an 8-core Core i7-5960X show the weaknesses of cutting system memory bandwidth in half? After my tests today, I’m not so sure it will.

I will say, if I built or bought a full-size X99 Haswell-E machine, I’d still want quad-channel memory, because there’s just no reason to give it up. But if I had to choose a small box where I got six cores instead of four, and my workloads benefited from the extra CPU cores? I’d have absolutely no problem making that decision to throw memory bandwidth overboard.