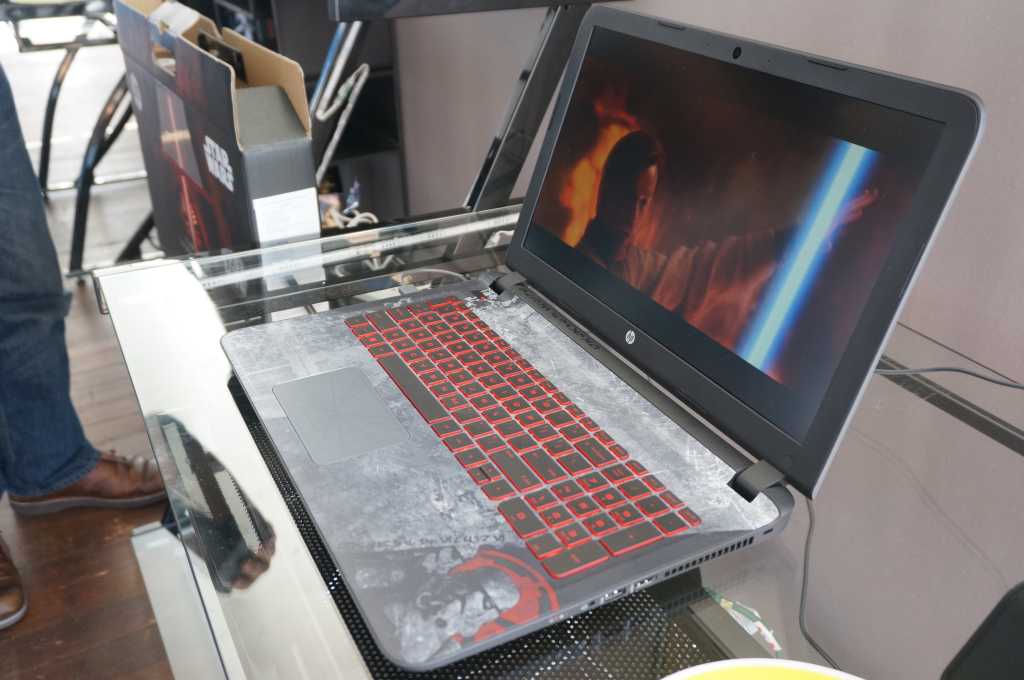 A long time ago in a corporate licensing office, far, far away, someone started granting permission to make Star Wars merchandise to just about anyone with a pulse and a checkbook. The result was Jar Jar Bink’s Tongue Sucker, Boba Fett misters and a Star Wars tackle box.

So when you hear the phrase “Star Wars laptop,” I’ll understand if you’d rather be cryogenically frozen than see more of your cherished memories thrown into a Sarlacc Pitt, where they will be digested over a thousand years.

Fortunately, HP’s take on a Star Wars laptop isn’t one of those horrible gimmicks that makes Mon Mothma weep. HP basically stayed on target in producing a laptop that Star Wars aficionados and Comic Book Guy collectors can appreciate.

Don’t believe me? Even the unboxing of the Star Wars laptop is a special May-4th experience and tells you how much work HP put into it. The box, of course, has Star Wars images plastered on it. That’s a given. But when you open it up (reducing collector value sucker!) and pull out your power brick, it’s in a box with an image of  Darth Vader himself. I might add, the box seems perfectly sized to store your action figures.

But now you’re ready to take out the laptop, which is held in place by a Sinear TIE Advanced x1 fighter. Yes, one of the few TIE fighters ever built that conveniently included a hyperdrive system, so Darth Vader could escape after the Death Star was destroyed. I mean, no reason for Han, Luke and Wedge to go after him right? They had a party to go to!

HP even modeled the solar panels of Vader’s Twin Ion Engine fighter in the packaging. Solar panels, which scientifical-types say would never work because you couldn’t collect enough photons that far in space. Sniff. Well, whatever.

Here’s the laptop itself. The name is unremarkable: “Star Wars Special Edition” Notebook. On paper, it’s a skinned Pavilion laptop with average parts. The specs on it include Intel’s latest 6th-gen Skylake Core i5-6200U, a 15.6-inch, 1920×1080 IPS panel, 6GB of DDR4 RAM in dual-channel mode and Intel HD 520 graphics. There’s also a 1TB hard drive. The device weighs about five pounds. HP says it includes an optical drive so you “can watch your Star Wars discs.”

The mostly unremarkable specs help contain the costs to an affordable $699. HP does offer memory upgrades, as well as an optional Nvidia GeForce 950m and larger storage, but you know what? I’d rather buy the baseline model and do some upgrades myself. I’d drop in more RAM and an SSD. If it had an M.2 slot, which I’m going to imagine it does, I’d put in an M.2 SSD too, and then maybe a 2TB hard drive.

That way I could pull it out at the cafe to show my customer. And yes, after she exclaims “what a piece of junk!” I could say: “She’ll do 500MBps write speeds kid. I’ve made a lot of special modifications myself.”

But again, HP didn’t just slap on the skin and call it and call it a day. On the top deck of the laptop is none other than TK-421. You probably know him as a Storm Trooper who somehow couldn’t blast a Rebel even from five feet away.

The use of TK-421 and Darth Vader, I’ll point out, shows HP knows its Star Wars fans too. No matter what you think of the hardware, who doesn’t love Episode IV? Now imagine someone in HP corporate looking over the Star Wars licensing menu at Disney and noticing how much cheaper it probably is to license Episode I merchandise. I can hear this conversation: “Whoa, 25 cents to license teenage Anakin Skywalker, and they’ll throw in Jar Jar for free!”

Moving over to the track pad, HP re-purposed the targeting computer technology from an Incom T-65, which non-nerds will recognize as an X-Wing. And yes, don’t worry, you can switch it off if you want to use the Force instead. (That’s code words for using your USB mouse instead of the trackpad).

Besides the exterior finishes, HP also polished the OS itself. There’s licensed sounds, screen savers, wallpapers and even a nifty trash icon that switches from Episode IV Death Star when full to Episode VI when empty. HP even throws in a licensed Star Wars Aurebesh font. That way you can type memos in Aurebesh to annoy your boss.

“What, you don’t read Aurebesh?”

Could it be a nicer laptop? Sure. Could the company have taken its sexy Spectre X360 and done the full Star Wars treatment on it? Sure, but then you’d be the farm boy sitting in a Mos Eisley tavern complaining about paying $1,300 for a Star Wars laptop and how you could almost have custom decals created and put on it for that much.

Yeah? Well who’s going to do that kid, you?