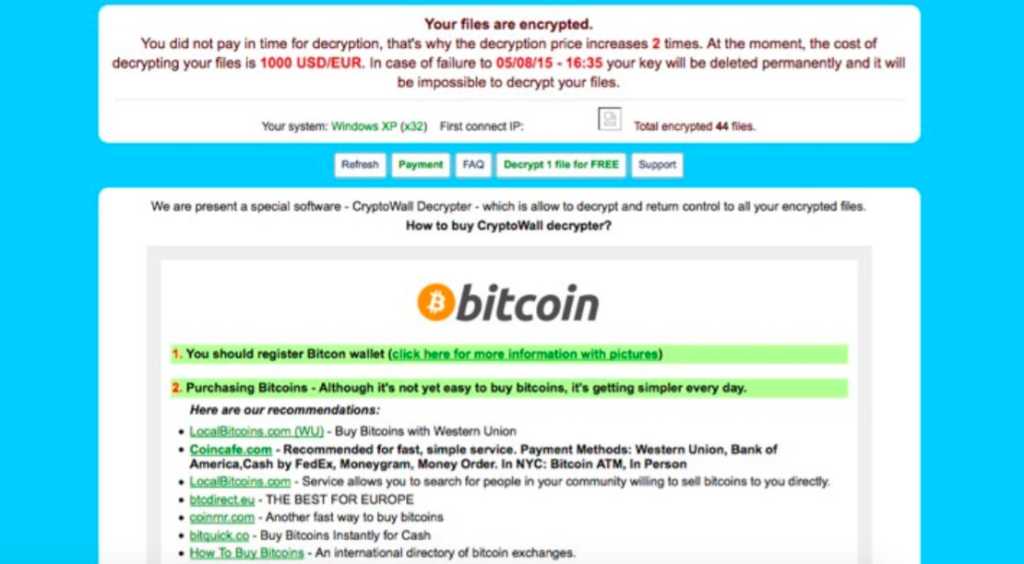 Just one cybercriminal group may be collecting the revenue from Cryptowall 3.0, a malicious program that infects computers, encrypts files and demands a ransom, according to a new study released on Thursday.

Cryptowall is among several families of “ransomware” that have posed a growing danger to businesses and consumers. If a computer is infected, its files are scrambled with strong encryption.

There is little recourse for those affected. The best defense is to ensure files are backed up and that the backup can’t be reached by the attackers. Otherwise, the only option is to accept the loss or pay the ransom, which can range from $500 to as much as $10,000.

CTA studied Cryptowall 3.0, the latest version of the malware, which appeared earlier this year. Victims are instructed to pay in bitcoin and are supplied with an address for the bitcoin wallet controlled by the attackers.

Since bitcoin transactions are recorded in a public ledger known as the blockchain, it’s possible to analyze transactions.

But to make it harder for security researchers, a different bitcoin wallet address is given to each victim, and the funds are then dispersed among many other wallets in a sometimes confounding trail.

The attacks directed at people’s computers come in waves, and the cybercriminals identify those waves by assigning campaign IDs to them, similar to how digital marketing campaigns are tracked.

Although following the flow of bitcoins through a complicated web of wallets was difficult, “it was discovered that a number of primary wallets were shared between campaigns, further supporting the notion that all of the campaigns, regardless of the campaign ID, are being operated by the same entity,” CTA wrote.

A single campaign identified as “crypt100” infected as many as 15,000 computers worldwide, netting at least $5 million in revenue. All told, CTA estimates that Cryptowall 3.0 may have generated as much as $325 million.

“When looking at the number of victims providing payment for the Cryptowall 3.0 ransomware, it becomes clear that this business model is extremely successful and continues to provide significant income for this group,” CTA wrote.

The report doesn’t speculate on where members of the group may be located. But Cryptowall 3.0 has a clue coded into itself: If it detects that it is running on a computer in Belarus, Ukraine, Russia, Kazakhstan, Armenia or Serbia, it will uninstall itself.