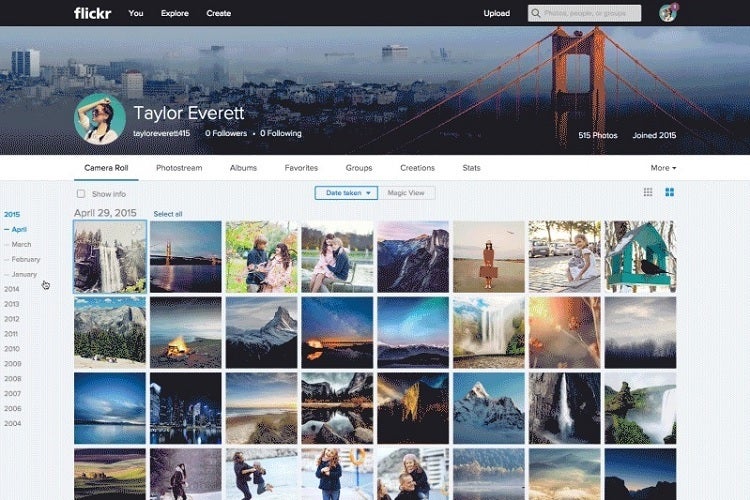 If you’re not using Flickr’s free terabyte of photo storage , perhaps a slicker design and new features will sway you.

That’s the hope, at least, as Flickr polishes up its website, mobile apps, and uploading tools. The redesign will likely upset some Flickr diehards—as redesigns always do—but it’s also more straightforward for folks who’ve stayed away from the service in the past.

The website, for instance, is much simpler, with the top navigation bar slimming down from six categories to three (“You,” “Explore,” and “Create.”) The main attraction here is the “You” tab, which lets you view your camera roll, albums, favorites, friend activity, groups, and stats. You can use the other tabs to view public photos and make printouts.

The mobile apps are now consistent across iOS and Android, and it’s now much easier to manage photos. Instead of having to tap on each one, you can hit the select tool and swipe across all the photos to highlight them. You can then share the selections, move them into albums, or delete them. As with before, users can automatically upload any photos they take on their phones or tablets.

Flickr is also adding some new ways to dig up old photos, based on image recognition. A “Magic View” sorts photos into categories such as landscapes, animals, and screenshots, while the search function can narrow results down by color, size, or orientation.

Why this matters: The design overhaul comes nearly two years after Flickr started offering a terabyte of storage in hopes of winning back users from newer services like Instagram and Dropbox. The giveaway alone wasn’t enough, however, as its upload and categorization tools were still too cumbersome. While Flickr’s new look and photo management tools probably won’t restore the service to its former glory, it’ll at least make that terabyte of storage more tempting as an additional backup solution.