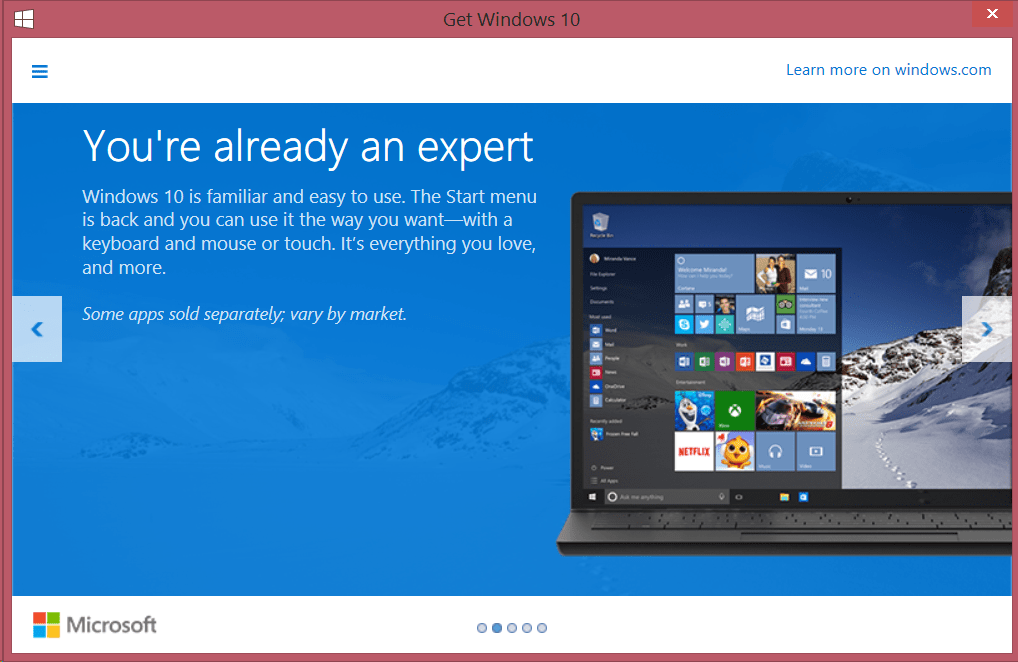 The wait is over: Microsoft said early Monday morning that you’ll be able to download Windows 10 on July 29, especially if you sign up for a “reservation” on Windows 7 and Windows 8.1 machines.

On that date, the company said, you’ll be able either to download Windows 10 or buy a new Windows 10 PC from retailers. And if you click the “reservation link” that Microsoft is pushing via its most recent updates to Windows 7 and Windows 8.1, you can apparently sign up to preload the software just as soon as it’s ready.

Don’t expect Windows 10 Mobile to be available on that date, however. In a footnote to a blog post announcing the date, Microsoft notes that the date applies just to PCs and tablets. Microsoft also didn’t explicitly specify that the July 29 date applies to both the Windows 10 Home and the Professional versions, but we can assume both are included.

Terry Myerson, Microsoft’s corporate vice president in charge of all of its operating system development, wrote that Windows 10 will be a free upgrade—and, like the ongoing security updates that Microsoft will provide, will be “free for the supported lifetime of your device.” Microsoft didn’t define what the “supported lifetime”of those PCs will be, however.

Why this matters: Obviously, we’ve all been waiting for the day that we can know we’ll have the final version of Windows 10 in hand. But this date meant quite a bit more in years past, when Microsoft reserved testing of its new OS to a select few, and the detailed features of the new OS remained a mystery up through the launch. With Microsoft’s open public testing, that mystery goes away. Moreover, Microsoft’s commitment to continued updates after Windows 10 launches also means that the July launch is a moment in time, rather than the final steps in a long road of product development.

What you get in Windows 10

Microsoft’s Myerson ran down the list of Windows 10’s signature features: Cortana; its new Edge browser; the Xbox app and integrated Xbox Live service for PCs; Windows Hello, its biometric login service; the Windows Continuum transition between PC and tablet; and the Windows Store. In a related video by Joe Belfiore, the corporate vice president of the Operating Systems, Belfiore implies that the new Store will finally include high-powered Windows games that support Windows 10’s DirectX 12. Myerson specifically highlighted Maps, Photos, Mail & Calendar, Music, and Video as the separate but integrated apps that will complement the core Windows 10 experience.

Windows 10 users will be able to download the touch-friendly versions of Word, PowerPoint, and Excel that the company showed off earlier. But Myerson’s blog post also revealed another little tidbit of news: Versions of Outlook and OneNote will ship with Windows 10 at no additional cost. Both of the latter apps have been exclusively reserved for Office in previous versions.

Does that mean that Newegg, which put a page up claiming that Windows 10 would be available in store at the end of August, was mistaken? Not necessarily. It’s entirely possible that Microsoft will ship a finished copy to stores a month after it sends the same version to retailers. Microsoft said nothing about the price it would charge for Windows 10 at retail.

If you’re worried about missing your chance to download Windows 10 on July 29, don’t be. For one, you can always join the Windows Insider program, allowing you to download a preview copy of the OS and try out the new features as they’re tweaked and polished ahead of the launch.

Otherwise, you should be receiving a popup notification that’s triggered by the latest updates to Windows 7 and Windows 8.1. You’ll have the option of clicking on the popup to trigger the reservation process and ensure that your PC downloads the Windows 10 update, which will be free for up to a year after it launches. Interestingly, the updates will also scan your PC and alert you to any possible problems that you might have—such as incompatible hardware or services—when the upgrade kicks off. In all, the upgrade will total 3GB, Microsoft’s update says.

Once you’ve completed the process, though, relax! You can be sure you’ll have a brand new copy of Windows 10 running on your PC just as soon as everyone else does.