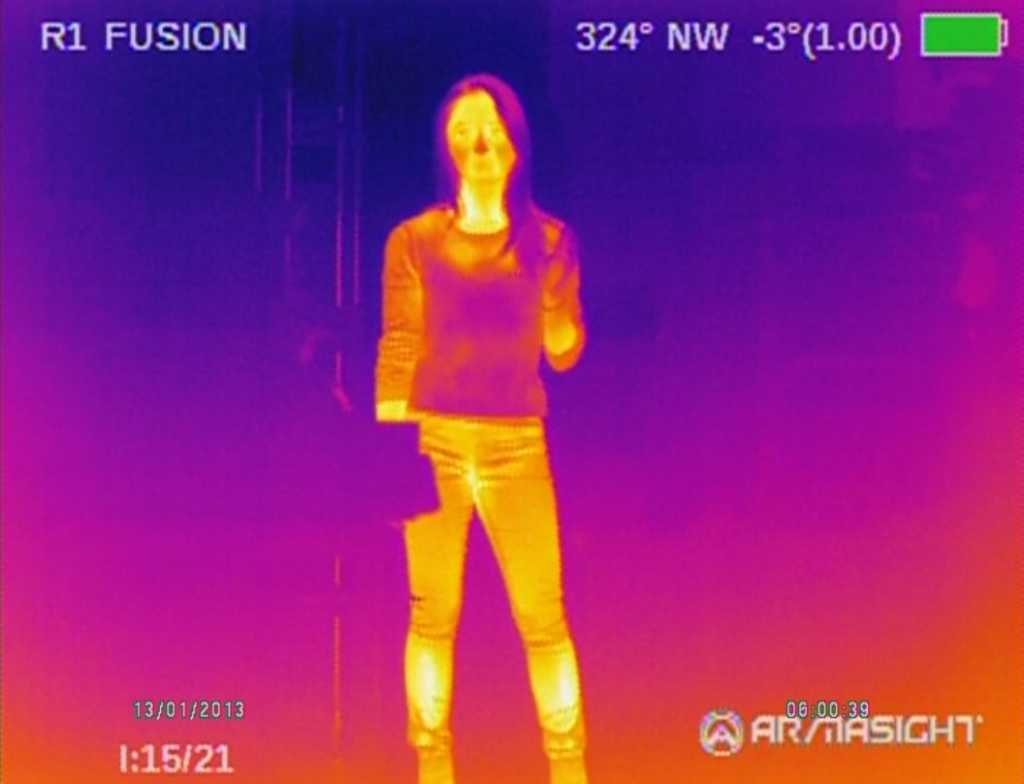 Thermal imagers that let you visualize heat are awesome tools. Around PCWorld, I use them to visualize hot spots on laptops or hardware I’m testing.

It’s a full Mil-spec thermal imager. And by Mil-spec, I don’t mean the watered-down Mil-spec definition thrown around by every Tom, Dick and Kumar tech company in town. The Zeus Pro can sink 20 meters under water for two hours and come out fine. It’s also strong enough to withstand the pounding of being mounted to a .50-caliber rifle.

Thermal imagers work by seeing in the spectrum beyond visible light (what humans can normally perceive as visible). The thermal gradations are translated into colors that humans can perceive. For example, when the Zeus Pro is set to a rainbow color palette, cold looks blue and heat looks yellow or red. The Zeus Pro offers multiple color palettes to suit the application. One especially neat one was “rain,” which would be used for seeing through heavy rain. As PCWorld is located in California, it’s not a mode I could test easily during our current drought.

The Zeus Pro uses a 100mm objective lens made of germanium, an element that’s transparent to the infrared spectrum. This front element magnifies the image, which is fed into an imaging core made by FLIR. It’s FLIR’s top-of-the-line Tau 2 core, which produces a 640×512-resolution thermal image.

Among thermal imaging cores, two of the main differences are the resolution they produce and the frame rate. From our 4K view of the world where phones have QHD+, a VGA-like resolution may seem pretty pathetic, but it’s the tops in portable thermal imaging.

The original FLIR One consumer model, for example, features a resolution of 80×60. Those aren’t typos. FLIR cleverly makes up for that by mixing visible light images, so you don’t just see blobs of color.

Don’t leave the country with it

The second important spec in the Zeus Pro is the refresh rate. Consumer thermal imagers have very low frame rates, which makes videos look choppy and slow. The Zeus Pro I toyed with had a 30Hz refresh rate, or 30 frames per second. An even higher-end version of the Zeus Pro runs at 60Hz, or the all-important 60 frames per second. The higher the refresh rate, the better the image when something is moving fast or you are panning the imager. That’s one of the reasons the Zeus Pro can’t be sold to anyone outside of the U.S. without approval from the State Department.

Thermal imaging can see through smoke

The Zeus Pro isn’t intended for fire and rescue, however, nor analyzing how hot a CPU gets. It’s intended for the military primarily and—believe it or not—commercial hunters.

Armasight officials tell me thermal imagers are very popular with hog hunters, who are hired by farms and agriculture officials to stop wild boars from destroying everything in their path. Wild boars, which are not indigenous to this country, do about $1.5 billion in damage to farms and the environment every year. They also carry disease and parasites which can be easily passed on to humans.

In states where wild pigs are out of control, it’s year-round hunting season. When a pack of wild pigs shows up, hunters are called in—and it’s even approved to cull them from helicopters.

Wild hogs are nocturnal, so they’re hunted in the pitch-black. With a Zeus Pro mounted on a rifle, it’s almost unfair.

The Zeus Pro is built like a high-tech tank. The internal screen uses an 800×600 OLED panel to display the thermal image, and it features a digital compass and inclinometer. The Zeus Pro can also be connected to your smartphone via Bluetooth to save GPS tracking information. It features a video out, and Armasight offers a ruggedized DVR that mounts to the rail system to record your footage.

Interestingly, military units have always eschewed rechargeable batteries in favor of lithium ion cells. The reason is you can’t charge anything when you’re sitting in a ditch in an undisclosed location. Simply swapping out the dead batteries for fresh ones is preferred. The Zeus Pro runs on four CR123 lithium batteries. With fresh cells, you should see a four-hour run time. In a pinch you can also run the unit on a single CR123 battery, which I had to do after forgetting to power down the Zeus Pro. There’s also a rugged adapter ring that will let you run the unit on AA batteries, if it comes to that. For longer battery life, Armasight sells an extended battery for up to 14 hours of run time.

With a person standing about 100 feet away and the magnification turned down to minimum, the Zeus Pro produces stunning thermal images. In the image above, for example, you can tell the person is a female with long hair and wearing pants as she stands in the pitch-black. In a military or security application, this is an important distinction. In the image below, you can easily see it’s a male, and you can even see he has sunglasses hanging on his shirt. Again, this is the magnification turned down to the minimum on the Zeus Pro.

What about the Predator?

Because most consumers’ exposure to thermal imaging is through what they saw in the classic movie Predator, I decided to test just how effective it is to cover yourself in cold mud. The theory—at least movie theory—is that covering your body with mud would mask your thermal signature and make you invisible to an alien hunter using thermal vision. So, I covered my face and part of my torso with mud and then had someone use the Zeus Pro to snag video of me. If the mud trick worked, as it did for Arnold Schwarzenegger in Predator, my head would at least be invisible.

Hollywood lied. Hard to believe, isn’t it? The mud test didn’t work at all, as you can see from the image below. The image is out of focus, as I was too close to the Zeus Pro, and that’s probably for the better to save you from seeing my nerd boobs.

The Armasight Zeus Pro is a bad-ass thermal imager, built like a tank yet capable of produce amazing long-range images. If I had a farm to protect from rampaging wild hogs, it would be well worth the cost.