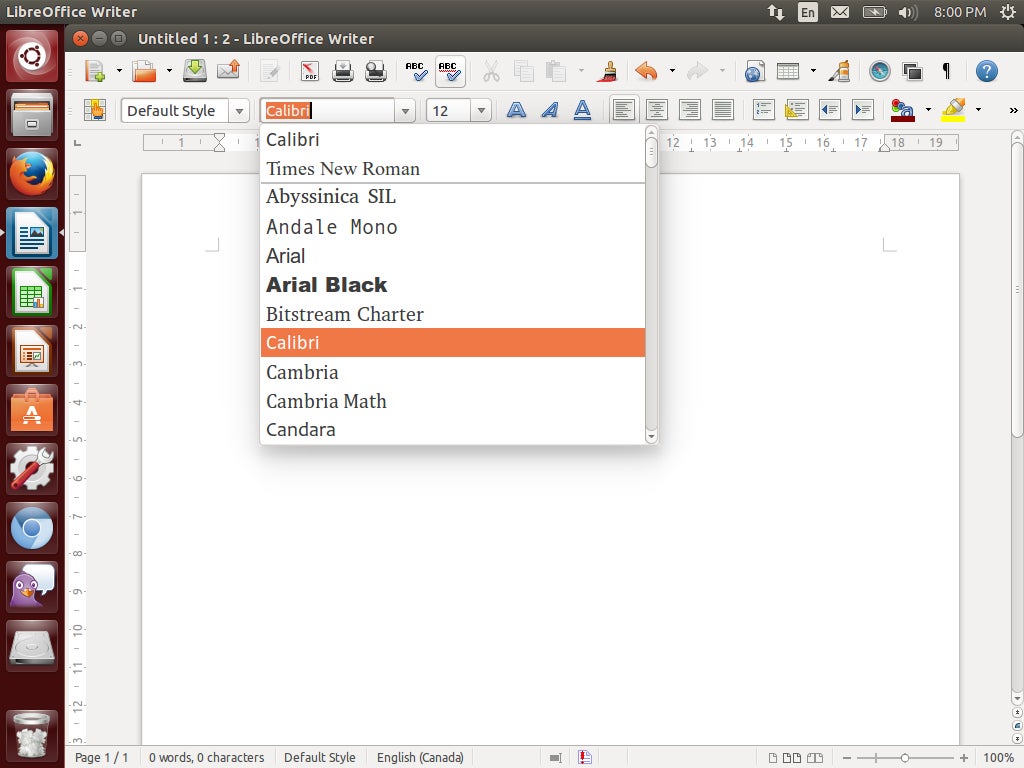 Times New Roman, Calibri, and many other popular fonts are created by Microsoft and can’t be included with Linux. If you open a Word document or another Microsoft Office document in LibreOffice or OpenOffice, you’ll need Microsoft’s fonts installed on your Linux system to see the documents as they were intended to look.

You can also use Microsoft’s fonts to create documents of your own, so you can compose a document in Calibri or Times New Roman and save it as a DOCX or DOC file for maximum compatibility with Office.

Microsoft released a package of “TrueType core fonts for the web” back in 1996. These fonts were given a very permissive license agreement, so anyone could install them. Microsoft wanted their fonts to be the standard fonts everyone with a web browser had, so they gave them away. Microsoft terminated this project in 2002, but the fonts can still be installed thanks to MIcrosoft’s old license agreement.

First, open a terminal. Click the Ubuntu icon on the dock, search for “Terminal,” and click the terminal shortcut.

Type or copy-and-paste the following command into the terminal and press Enter. This command asks for administrator access (sudo) before launching the package manager (apt-get) and telling it to download and install (install) the ttf-mscorefonts-installer package:

Type your password when prompted and press Enter again. When the license agreement appears, use the arrow and Page Down/Page Up keys to scroll through it. Press Tab to select the OK button and press Enter to accept Microsoft’s license agreement. The installer will download the fonts onto your system and configure them so they’re immediately available to applications like LibreOffice and OpenOffice.

Microsoft added a group of new “ClearType Fonts” to Windows with Windows Vista and Office 2007. These fonts are named Constantia, Corbel, Calibri, Cambria, Candara, and Consolas. Calibri became the default font on Microsoft Word 2007, and it’s still the default font on Word 2013 today.

Microsoft never released these fonts to everyone like they did with the older core fonts. However, Microsoft does make these fonts available to download as part of their free PowerPoint Viewer 2007 application. If you don’t have a Windows system around, you can use a script that downloads the PowerPoint Viewer 2007 application from Microsoft, extracts the six ClearType fonts, and installs them on your Linux system. This script will install the ClearType fonts for just your user account, while the above script installs the TrueType core fonts for every user account on your system.

The fastest, easiest way to do this is with a few terminal commands. These commands are easy-to-use—rather than walk you through clicking many different things, we can just have you copy-and-paste a few commands.

If you haven’t yet installed the TrueType core fonts, you’ll need to run the sudo apt-get install cabextract command to install the cabextract utility on your system. If you installed the Microsoft core fonts using the command above, this should already be installed.

Next, copy-and-paste or type the following command into the terminal and press Enter. This command downloads the VistaFonts-Installer script and runs it. The script downloads the fonts from Microsoft and installs them on your system:

If you have a Windows system lying around, these fonts are fairly easy to install. For example, let’s say you’re dual-booting Ubuntu Linux and Windows. You’ll find your Windows partition in Ubuntu’s file manager. Click the Windows drive in the sidebar to access it. Navigate to the WindowsFonts directory and you’ll see all the fonts installed on your Windows PC, including the fonts that came with it. Double-click a font and click the Install button to install it for your user account. You can use this trick to quickly install any other Windows fonts you want, including Tahoma and Segoe UI. In fact, you can even use this trick to install fonts like Times New Roman and Calibri if you have a Windows system.

If you have another Windows computer, you can navigate to the Fonts pane in the Control Panel or open the Fonts folder at C:WindowsFonts. Select the fonts you want to use, then drag-and-drop them to a removable drive. You’ll get copies of the fonts in .ttf form. Take the removable drive to your Ubuntu system, double-click each .ttf file you want to install, and click the Install button to install it.

Whether your Linux distribution uses LibreOffice or OpenOffice, configuring your office suite of choice to work with these fonts is easy. If you’ve installed them using any of the instructions above, they’ll already be available to use. If either office suite was open as you installed the fonts, you may have to first close the office suite and re-open it. The fonts will appear as options in the Fonts dropdown box, so you can use them like any other font.

Open a Microsoft Office document created using these fonts and LibreOffice or OpenOffice will automatically use the appropriate fonts. They’ll display the document as it was intended to look, Microsoft fonts and all.

If you’d like to change your default fonts for new documents, click Tools > Options > LibreOffice Writer or OpenOffice Writer > Basic Fonts (Western). Your office suite of choice will use Microsoft’s fonts as the default fonts in future documents if you choose them here.

Ubuntu and other Linux distributions actually include Red Hat’s “Liberation Fonts” and use them by default in their office suites. These fonts were designed to substitute for Arial, Arial Narrow, Times New Roman, and Courier New. They have the same widths as Microsoft’s popular fonts. If you open a document written with Times New Roman, the appropriate Liberation font will be used instead so the flow of the document won’t be interrupted. However, these fonts don’t look identical to Microsoft’s fonts. The Liberation project also doesn’t provide fonts designed to match the width of Calibri and Microsoft’s other newer ClearType fonts. If you’re a Linux user that wants the best Microsoft Office compatibility possible, you should install Microsoft’s fonts.