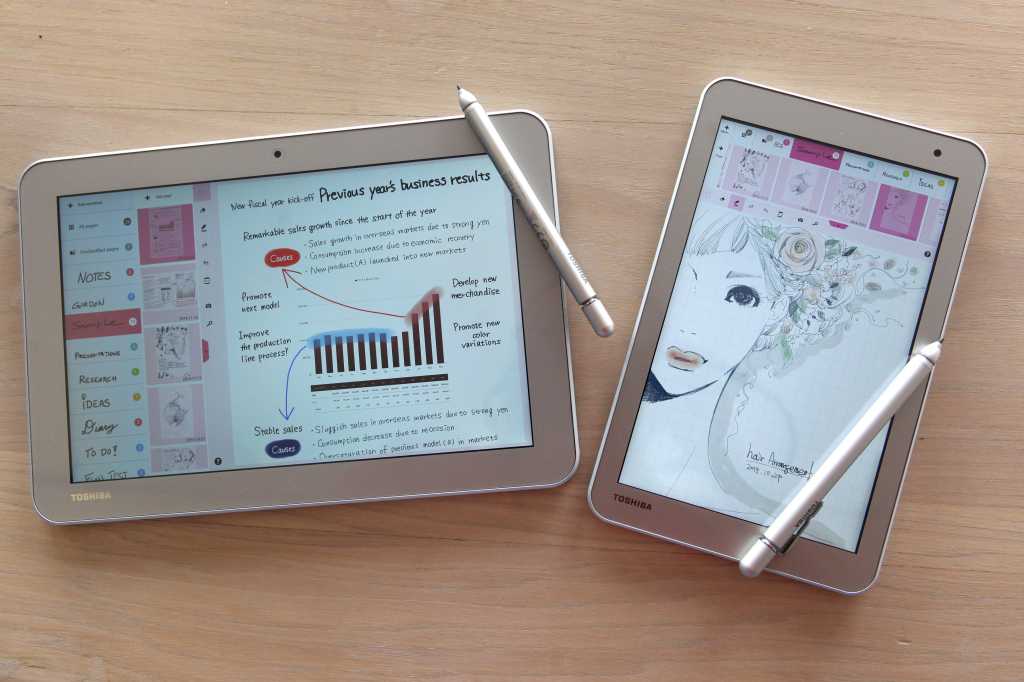 The Consumer Electronics Show is great for one thing: spotting PC technology trends. Out of hundreds of systems we saw, three clear trend lines emerged that we think will hold through the year.

Smaller and thinner were the ‘it’ attributes at CES. Samsung was first out of the gate with news of its two-pound ATIV Book 9. I hefted it at an event and came away impressed, but clearly it was too heavy, right? Who am I—Arnold Schwarzenegger?

Lenovo thinks it has the answer in its even lighter LaVie Z HZ550. Built as part of a joint partnership with NEC, the LaVie Z HZ550 weighs just 1.72 pounds, which, Lenovo claims makes it the lightest laptop with a 13.3-inch screen.

To shave ounces, Lenovo used an indium gallium zinc oxide (IGZO) panel. IGZO has long been known to be more power-efficient than a traditional IPS screen. A move to IGZO let Lenovo trim the battery size.

A forged chassis also helped: While a typical laptop might have a keyboard tray that’s separate from the laptop body, the LaVie uses a one-piece tray.

The LaVie on demo didn’t have the final keyboard, however. Its Japanese placeholder felt a little too compressed for our tastes, but Lenovo has until the May ship date to improve upon it.

Dell’s entry into the Twiggy laptop race is its XPS 13, which, the company maintains, is the smallest (but not the lightest) 13-inch laptop, jamming a 13.3-inch screen into the same real estate an 11-inch screen would take up.

I tried the XPS 13 at CES and even compared it to the first-generation XPS 13. It’s no lie: That bezel is thin, and this laptop is small. But its 3.3-pound weight is practically plus-sized in this company. Dell prioritized battery life, and the XPS 13 offers an incredible 15 hours of runtime. I’d expect other notebook vendors are gunning to be on the record books as the “lightest” and the “thinnest.”

Pen based computing is hip again

The shocker at this year’s CES was just how much pen computing was the hot feature to integrate. Toshiba was first out the gate with no fewer than three tablets with pen technology. And I don’t mean the lousy $1.99 eraser-nub pens either: These are Wacom pens with 2,048 levels of pressure sensitivity. While you could get Wacom pens in pricier tablets, Toshiba’s pushes the superior pen tech into $350 and $400 tablets.

Lenovo also pushed pen technology in unusual ways. The first was its AnyPen that lets you use any conductive object as a stylus. That means pencil, pen–even a fork. The company also showed off a feature in development it’s calling WRITEit.

WRITEit aims to fix the problem with Window’s pen implementation. If you decided to use the pen on your, say, Surface Pro 3 to write a person’s name into the Send field in Outlook, you’d have to click the field and wait for the handwriting recognition module to appear. With Lenvo’s WRITEit, you could simply select any input field and start writing.

In the demo I saw, it was far more instinctive than having to see-saw between the fields you want to use and Microsoft’s own handwriting recognition module.

Intel’s Broadwell CPU is late, but it’s here and in a big way. It was almost difficult to find a laptop at CES that didn’t use Intel’s new mobile processor. It was in thin-and-light laptops, convertibles and NUC-sized devices. The one no-show was quad-core Broadwell CPUs. In fact some vendors offered refreshed laptops using Haswell instead this round.

Why? Quad-core mobile Broadwell CPUs aren’t due until later this year, which caused concern with some OEMs. Intel officials still insist Broadwell H is on track but there are concerns that with Broadwell H coming out nearly on top of Intel’s next CPU, codenamed, Skylake, there’s just no need.

If noting else, vendors I spoke with seemed happy with the longer battery life the dual-core Broadwell U is giving them.