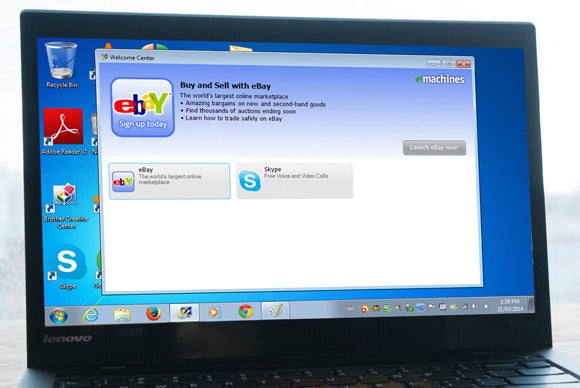 Lenovo may have publicly buried bloatware, but it’s anything but dead. After the company’s Superfish scandal, we shopped Best Buy and found it alive and well on major vendors’ PC offerings. A little research should save you from the worst of it, though. Here’s what we learned.

Bloatware is as bloatware does

We call it bloatware, but PC executives make clear that they install software on PCs to benefit consumers and pad tiny profit margins. The vast majority is harmless (if obnoxious), and some, such as a year’s subscription to Microsoft’s Office 365, arguably increase a PC’s value without increasing the price.

The now-infamous Superfish is an adware tool that supplied its own paid search results, and it came preinstalled on certain Lenovo PCs. Intended as a service to help users comparison-shop, Superfish was more than annoying—it was a security risk. (The developers behind Superfish claim there’s no security risk at all, while researchers disagree. The Superfish vulnerability has been found in other apps as well.)

Lenovo apologized and said it would make amends—though its commitment to reducing bloatware actually comes with several loopholes. If nothing else, however, Lenovo’s Superfish seppuku did one thing right: It shone a spotlight on exactly how widespread bloatware is. Our trip to Best Buy yielded pages of notes on preinstalled apps on PCs.

At Best Buy, we jotted down the bloatware apps inside individual PCs from Asus to Toshiba. Our conclusions: Bloatware varied not just from vendor to vendor, but from model to model. The more disk or flash storage a PC had, the freer some vendors seemed to feel to fill it up with unwanted third-party software. Conversely, tablets, regardless of vendor, seemed to offer less bloatware.

Want to see a list of the pre-installed apps we found? We’ve put them on this page.

Here’s an unexpected surprise: The one no-name tablet that Best Buy offered included no bloatware at all, suggesting that looking outside the usual list of name-brand suppliers might spare you the trouble.

So which models offer what? We’ve listed our findings, but we can tell you that Lenovo was the worst culprit for bloatware that we found, with Hewlett-Packard right behind. Dell, to its credit, seemed to have less bloatware than the others. We’d also say that the Lenovo machines in retail have arguably the highest percentage of useless apps, period.

What you’ll find, as well, is that many vendors hide bloatware behind their own brands. Rather than requiring you to seek out your own cloud services, for example, a company like Hewlett-Packard will simply strike a deal with a third party, then provide an “HP Connected Drive” app.

That’s why restricting bloatware to “Lenovo’s own apps” doesn’t necessarily mean that Lenovo won’t be offering apps you don’t want. It’s just a strategy that everyone else already uses.

What PC makers say about bloatware

Lenovo said it will reduce the type of software pre-installed on its machines to “the operating system, security tools, Lenovo’s own apps, and any software necessary to make the hardware run properly.” We asked other PC vendors if they planned to follow Lenovo’s lead. Surprisingly, many claimed they were already out in front.

“Dell listened to customer feedback and began aggressively reducing pre-loaded software on our consumer PCs more than 18 months ago,” a Dell spokesman said in an email. “The number of applications we pre-load is typically less than half of what other OEMs load, and are selected solely based on the benefits they provide to the end user.”

The spokeman added that Dell exercised caution.  “We have strict policies in place to minimize pre-loaded applications and ensure software like Superfish that compromises system security doesn’t find its way into our system images.”

Acer representatives said they prioritize security. “According to Acer’s global software team lead, we pre-check third party software and applications to ensure they do not include anything that will substantiate security concerns,” a spokeswoman said in an email. “We also work very closely with leading security providers to make sure they constantly update their definition list in order to detect adware types.”

Hewlett-Packard offers a way to check what bloatware is loaded before you buy it: On its website, you can select an individual product, then drill into the specs.

“Did Lenovo’s announcement change HP’s strategy? I would say no,” said Mike Nash, the vice president responsible for the consumer PC experience at HP. “We are constantly increasing our focus on delivering the best customer experience possible,”

Nash said that HP worked “very very closely with Microsoft” to minimize boot time and maximize battery life, in part, by minimizing what was loaded onto the machine.

“I think the biggest thing…is to make sure that the industry understands that pre-installed software is not the same thing as software that changes security configurations on your PC,” Nash said.

In the eye of the beholder

To be fair, any definition of bloatware is by some degree subjective. Apps like Lenovo Share, for example, may seem extraneous until you need to send a large file quickly to another Thinkpad user.

So-called “trialware”—paid apps that offer a free short-term subscription in an effort to convince you to sign up—is a grayer area. We’d also include a year’s subscription to Office 365 as a paid benefit, rather than bloatware.

But the real gotchas—the apps that affect how your PC behaves—are those that load at startup, quietly operate in the background, and suck up memory and computing resources. Depending on your level of knowledge, you may or may not be able to detect those before you actually make your purchase. But there’s good news: We can help you wipe out any bloatware that comes with your PC, with just a few common, free, and easily downloadable tools.

If you do buy from a retailer, be wary of offers to load “special deals” onto your machine, or “free upgrades” to additional apps—as we heard one salesperson offering. Remember, avoiding bloatware is why you’re reading this story.

How to avoid bloatware in the first place?

At this point, the short list of surefire ways to ensure a bloatware-free PC are to build it yourself, using an OEM copy of Windows 7 or Windows 8; shop at the Microsoft Store for a Signature PC; or buy from a boutique system builder. The latter option isn’t foolproof, but boutique builders are generally obsessed with maximizing performance, and bloatware stands in the way.

“We don’t ship any bloatware. Ever,” said Kevin Wasielewski, the chief executive and co-founder of OriginPC, a boutique builder, in an email. “We only ship what our customers request to have installed.”

If you have the time, building your own (desktop) PC is another way. You know what’s going into the machine, and you’ll have to total control over what’s loaded onto the hard drive. If you’re a little nervous, try talking to your local computer shop about assembling one for you. (Just make sure to point out that you don’t want any additional services loaded in without your permission.)

Notebooks, however, currently aren’t a build-your-own proposition. If you want a bloatware-free notebook, we’d recommend buying it from Microsoft directly: As with its desktops, its Signature Edition laptops come bloatware-free.

That’s the end goal here: Give PC customers a choice. Most consumers would have no problem with HP or Lenovo or Dell offering discounted software directly to their customers, if that software were offered through their respective Web sites, and on an opt-in basis.

That option exists today. Best Buy already offers a digital download site for customers to download a Trend Micro anti-malware solution on this Lenovo laptop, for example. PC makers—many of which already provide sites to download firmware and their own app updates—could do the same. Or, like Hewlett-Packard, companies could offer a digital downloads page where customers could pick and choose which apps they wished to install.

HP’s Nash, however said that a pure download-it-yourself strategy probably wouldn’t work. “Could you do it? Sure? Why don’t we do it? At the end of the day, I don’t think most customers are going to go out there and sort of hunt those things down on that Web site,” Nash said.