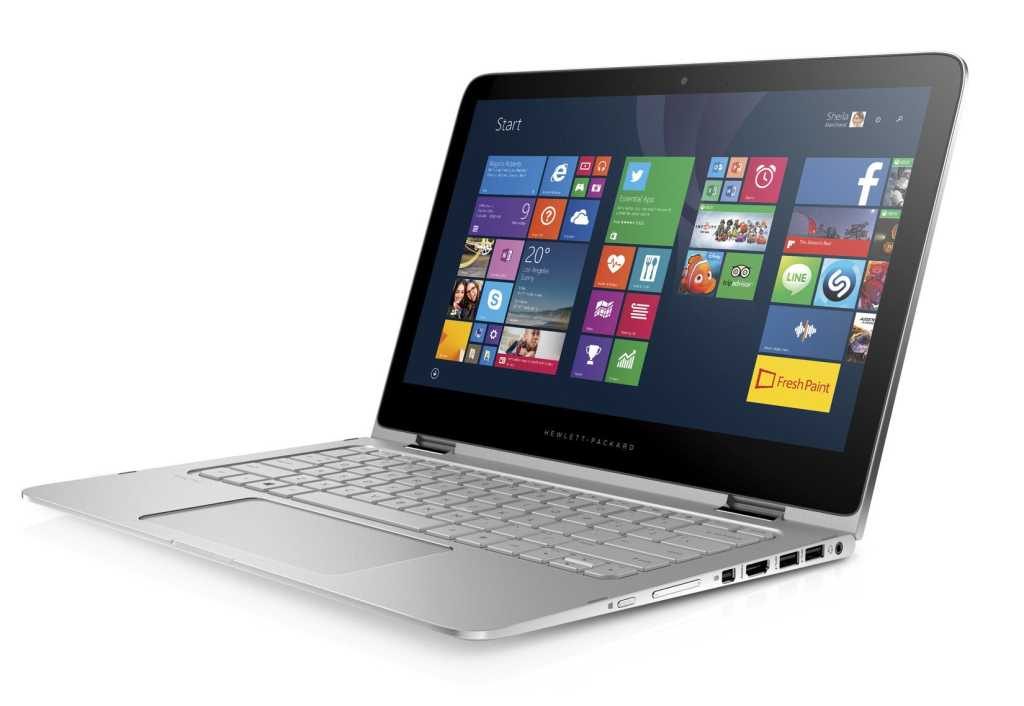 If you thought HP’s impending corporate split would make it slink away from the PC game, you’re wrong. If anything, the company’s new Spectre x360 laptop, announced on the eve of Mobile World Congress, seems intent on proving HP will be as frisky as ever once its PC and printer division is pushed off the HP lifeboat this summer.

The Spectre x360 features an exquisite milled aluminum body. The edges of the lid and frame are polished to a near-mirror finish. And beneath the surface, the system was built practically in lockstep with advice from Microsoft. It’s a tale of hardware-software nerd collaboration that we’ll get to soon.

If you’re wondering why HP doesn’t offer M.2 PCIe storage instead of M.2 SATA storage, it’s because the cost, power and performance benefits don’t add up, HP says. Most consumers, the company said, would rather have a slightly slower 256GB than a faster 128GB SSD.

HP also opted not to adopt an IGZO panel for its QHD panel version. HP believes Panel Self Refresh (PSR) technology equalizes any power advantages IGZO offers for high-resolution displays. PSR works by refreshing only pixels when they need to be refreshed.

HP again reaches for the Synaptics’ wide trackpad that appeared in the previous Spectre 13. HP said it also spent an inordinate amount of time making sure it got the keyboard just right. Using it throughout my hands-on, I have to agree. The keys aren’t too cramped like they are on the XPS13 2015, and travel is rated at 1.5mm. It’s a pleasant keyboard for a thin laptop.

It’s the little things that count

Convertibles don’t always have the most durable or confidence-inspiring hinges, so HP says it designed a hinge for the Spectre x360 that doesn’t compromise. Flip the lid open, and you’d be hard-pressed to tell you’re working on a convertible.

A lot of super-light convertibles—such as Lenovo’s Yoga 3 Pro with its watchband hinge —exhibit “monitor bounce” when you use your finger to tap the screen while in laptop mode. The Spectre x360’s hinge is definitely more rigid than the Yoga 3 Pro, but still not as stiff as a standard laptop hinge. Part of that reduced monitor bounce also ties back to the weight of the Spectre x360. At 3.26 lbs. it’s definitely no lightweight laptop. The base-model Dell XPS 13 2015, for example, is 2.6 lbs without touch and 2.8 with touch.

Part of the added weight comes from HP’s battery choice, a 56 watt hour cell. Compare that with the 52 watt hour battery in the Dell XPS13 2015 and the 45 watt hour cell in the Asus Zenbook UX305.

HP says the Spectre x360 will give you 12.5 hours of battery life during office drone tasks, or 10 hours of web browsing. To get this battery life, HP says it made little changes like eliminating a hard drive activity LED. But perhaps the most eyebrow-raising “feature” of the Spectre x360 is that HP worked hand-in-hand with Microsoft to tune and optimize the new laptop.

Think of the Spectre x360 as the fifth Beatle

It’s hard not to think of HP’s new Spectre x360 as the fifth Beatle—or maybe the fifth Surface of Microsoft’s lineup.

That’s because the sexy Spectre x360 was built with unprecedented input from Microsoft. How closely did the two work? So closely that Microsoft engineering general manager Gabe Aul told us that “HP has gone all in” with Microsoft on the design of the Spectre x360.

“We worked in an open and more collaborative way than any one else,” Aul said.

Microsoft labs helped tune drivers and firmware, and provided feedback on design changes. Microsoft techs even found a problem with the laptop’s hinge sensor that was chewing up battery life. HP concedes this would probably have gone unnoticed.

Much of Microsoft’s input to OEMs concerns the manufacturer’s Windows build. Aul said that sometimes an OEM will submit an OS build to Microsoft for analysis, but by the time the laptop is launched, the build will have changed and the input from Microsoft will be of no use.

But Mike Nash, an HP vice president in the personal systems group, said his company took a much more careful approach with the latest Spectre. Microsoft’s lab received prototypes of the x360 at the same time as HP, and HP submitted final system images to Microsoft well before the product was done. No other OEMs have done that.

Microsoft’s advice was invaluable too, Nash said. In optimizing for just a plain run-down test where the laptop sits idle with a live display, Microsoft was able to squeeze battery life from 11 hours to 16 hours.

So why aren’t other vendors seeking Microsoft’s advice? It’s not entirely clear, but it’s possible OEMs are concerned about retaining competitive advantages. For example, Nash said during testing of the Spectre x360, a bug was found in how TPM was addressed by the OS. The fix didn’t just benefit HP, but all PC makers. If an OEM had found such a bug by itself, it could keep it quiet as a unique performance benefit.

Regardless, the result of the Microsoft collaboration, Nash said, is a laptop that will offer performance as good or better than competitors and class-leading battery life.

We haven’t even begun our review yet, but we did manage to run a couple of benchmarks during our hands-on. The first is PC Mark 8’s Work Conventional test, which measures basic office drone tasks. In this test, the Spectre X360 is just about dead even with the Dell XPS 13 2015 with the same CPU inside. The Core M in the Asus Zenbook UX305F isn’t too far behind here either.

The second test is Maxon’s CineBench R15 benchmark. It’s a pure test of CPU, and for kicks, I also threw in the performance of the latest iteration of Apple’s MacBook Air 11. With its older Haswell-based CPU, the MacBook definitely slower than the HP, but it does relatively well here. I’ll say Apple tends to drive its CPUs pretty hard. The Core M in the Asus starts to show its weakness though, and if this were a 3D test, both Core i5 Broadwell U units would be well ahead of the older Haswell U and the Core M.

Having just put my hands on the Spectre x360, we’re pretty far from a final review. But from what I’ve seen, it’s looking pretty promising. Not only does the Spectre x360 offer plenty of sex appeal, it doesn’t look to be sacrificing performance either. With a price of $900 for the Core i5 5200U, 4GB of DDR3/1600 and a 128GB M.2 SATA SSD, it’s definitely going to be a contender this year.