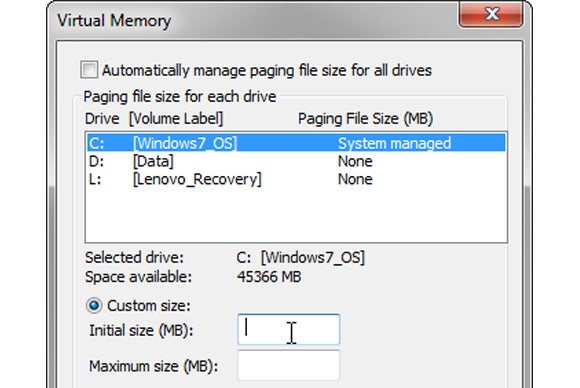 Virtual memory, also known as the swap file, uses part of your hard drive to effectively expand your RAM, allowing you to run more programs than it could otherwise handle. But a hard drive is much slower than RAM, so it can really hurt performance. (I discuss SSDs below.)

Some basics: Your PC has storage—a hard drive or SSD—and memory in the form of RAM chips. RAM is faster than storage, and you have much less of it. It’s also more volatile: Shut off the power, and everything in RAM disappears. You can think of RAM as the immediate workspace, and storage as the file cabinet. When you save a file, you’re copying it from RAM to storage.

When there’s no room in RAM for that program or file you’re trying to load, virtual memory kicks in. Some of the code and data in RAM goes to the swap file, making room to load something else.

If Windows keeps telling you that your virtual memory is too low, you can either buy more RAM or expand the swap file. One will cost you money, but the other will slow down your PC.

I’ve already told you how to buy more RAM. Here’s how to change the virtual memory settings:

Windows lets you set up swap files in different drives, although by default only C: has one. It doesn’t really make a difference. If you create multiple swap files, they’ll behave like one big one.

Speed isn’t the only problem with virtual memory. Sensitive data that you keep encrypted may reside, unencrypted, in the swap file. Your average run-of-the-mill crook probably wouldn’t bother looking for it there, but the police or the NSA will.

The performance problem is lessened considerably if you put the swap file on an SSD rather than a hard drive. But there’s a problem: SSDs wear out with too much writing, so putting a swap file on one might shorten its life.

If all you have is an SSD, you may want to disable virtual memory entirely. You can do this in the Virtual Memory dialog box by selecting the drive it’s on, clicking No paging file, then clicking Set.

However, doing this could limit the size and number of programs you can run at one time. You might try it, and then turn virtual memory back on after you find the lack of it too restrictive.