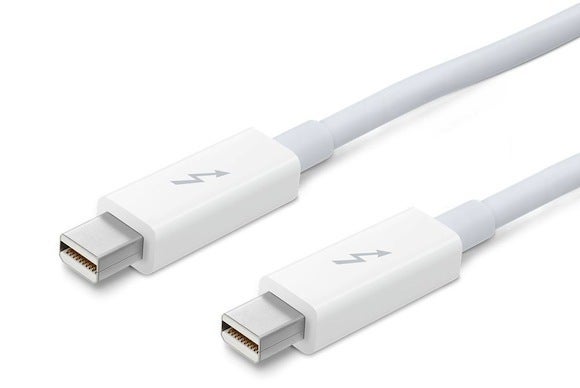 Intel could soon bring to market a faster version of its Thunderbolt connector technology with a throughput of 50Gbps, but the company is biding its time until there is a need for faster connectors.

Thunderbolt technology connects computers to peripherals like external hard drives at much faster speeds than USB 3.0. Thunderbolt ports are found in Macs and select Windows PCs, but are more expensive than USB technology, which is found in most PCs that ship today.

The latest iteration, Thunderbolt 2, transfers data at 20Gbps (bits per second). Intel is researching how to speed up Thunderbolt, but the company could potentially develop and deploy a faster connector for PCs based on silicon photonics technology, which combines silicon components with optical networking, said Mario Paniccia, Intel fellow and general manager of silicon photonics operations.

The thin connector could move data at speeds of 25Gbps for each fiber in the cable and scale up to 50Gbps with two fibers, which Paniccia said is sufficient for consumer devices. But he also said the throughput provided by the current Thunderbolt 2 is enough and there is no need for a drastic upgrade any time soon.

“When the need is there for higher speed—25Gbps or above—we will aggressively go after that market,” Paniccia said.

Instead of consumer devices, Intel is introducing silicon photonics into data centers through optical cables called MXC. The cables, which could have up to 64 fibers, can transfer data at net speeds of up to 1.6Tbps, and stretch up to 300 meters between servers or other data-center equipment. Technology from those cables could be scaled down and adapted for a Thunderbolt successor, Paniccia said.

Intel will need to talk to companies making cables to bring Thunderbolt successor cables to market, Paniccia said, but cautioned that such cables could be “years away.”

Intel had previously said it would bring a 50Gbps Thunderbolt replacement to market by 2015. Thunderbolt, originally named “Light Peak,” was envisioned as an optical technology, but the first cables introduced in the Mac in 2011 were based on copper. Optical cables were later added, but copper cables remain dominant.

Adoption of the interconnect technology has been slow as the cables and connectors are expensive, said Nathan Brookwood, principal analyst at Insight 64.

“People have already been complaining since it first appeared,” Brookwood said.

Connectors based on silicon photonics are more relevant to data centers because of the economics, Brookwood said. With the fast throughput, one MXC cable can replace many copper connectors.

Thunderbolt was believed by many to be likely to put a dent in the adoption of the slower USB 3.0, but that has not happened, with most PCs still shipping with USB 3.0 and USB 2.0 ports. USB 3.0 provides data transfer rates of up to 5Gbps, but the latest USB 3.1 specification, announced last year, is 10Gbps.

Intel is also working on low-power Thunderbolt technology for mobile phones and tablets, which largely still use slower micro-USB 2.0 ports. But Intel has said mobile Thunderbolt adoption could be blunted by WiGig, which can transfer data wirelessly at a rate of up to 7Gbps (bits per second).

Intel has researched silicon photonics technology for more than a decade. The first MXC optical cables are thinner than competitive copper cables used in data centers, Intel has said. The cables can support a range of protocols including ethernet and PCI-Express 3.0.

Copper cables are slowly being replaced and will ultimately give way to optical fibers, Paniccia said. But from a product perspective, the company is currently focusing silicon photonics on the data-center market, Paniccia said.