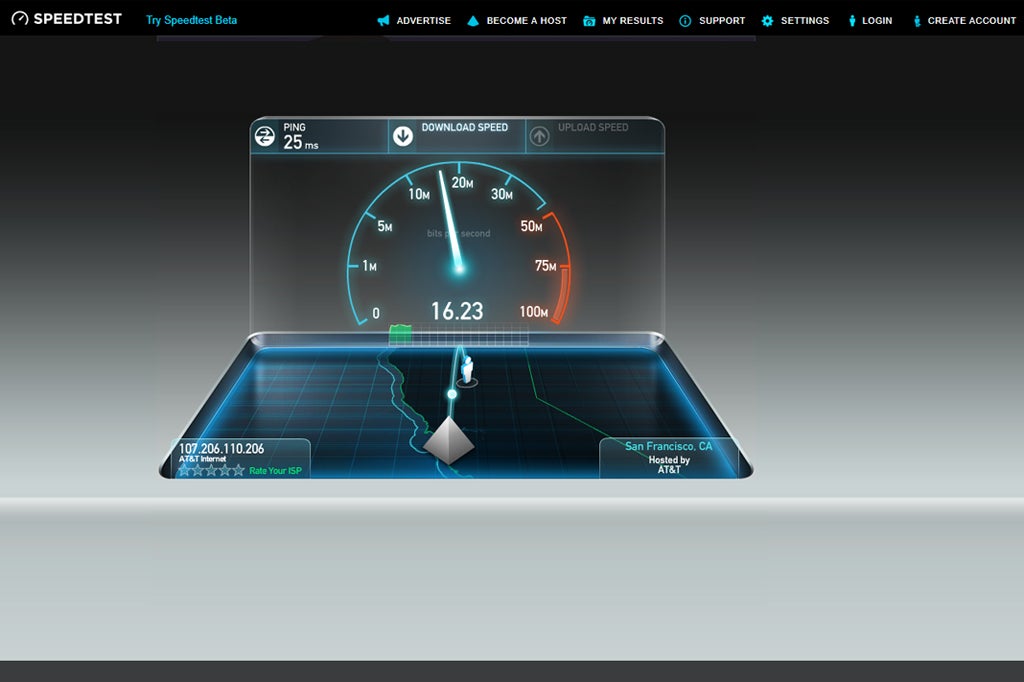 Essentially, what we’re trying to do is compare the amount of bandwidth that’s coming into your home with what your ISP is promising you. First make sure that you know what your Internet plan is, and what your ISP promises is the minimum connection speed. Consult your bill or your ISP’s Web site for that.

Let’s turn to the PC. For best results, you’ll want to use a wired connection if at all possible; that way, you don’t have to worry about interference and performance fluctuations that can occur while you’re on Wi-Fi. If you have any other wired devices on your home network, plug your test computer directly into the modem so those don’t interfere. Again, we’re trying to learn how much bandwidth is coming directly into your home, before it begins getting divvied up among connected devices.

If you’re stuck using Wi-Fi—say, you have a MacBook Air or a tablet or some other device that doesn’t have an ethernet port—do what you can to minimize interference. Make sure your Wi-Fi router is away from other electronic devices like cordless phones, and temporarily disconnect any other devices from your Wi-Fi network—after all, you don’t want another computer on your network to download a gigabyte worth of software updates while you run your tests.

While you’re at it, double-check to make sure your computer isn’t downloading something in the background. Check the Task Manager on Windows (summoned by pressing control-alt-delete) or Activity Monitor on MacOS, and look for network statistics (it’s labelled “Network”on MacOS, “Networking” on Windows).

If you’re having any problems with your connection, now is a good idea to reset your modem and router. Switch them off and unplug them for a few moments, then plug them back in and switch them on.

Several sites will help test your connection. Honestly, though, there’s little need to set a bookmark. If you’re using Bing as your search engine, simply typing “speed test” into the search bar will bring up a simple, obvious in-browser speed test in the list of results. Typing the same query into Google’s search engine will produce similar results, though Google is more proactive about telling you what it’s doing and what information it collects. Each test takes just a few seconds to run.

Here’s what Bing shows you:

And here’s Google’s speed test, alongside its results:

You’re perfectly welcome to go elsewhere, too.  Ookla’s Speedtest.net is the most common site to test your internet connection; all you need is a web browser with JavaScript turned on (it usually is unless you switched it off) and Adobe Flash installed. There are a couple of alternatives if you don’t have Flash installed (and don’t want it installed). There’s an HTML 5 version of Ookla’s Speedtest.net, or you can use Speedof.me, which also uses HTML 5.

All you have to do at this point is click the green “Begin Test” button, and Speedtest.net will check both your download and upload speed. This may take anywhere from a few seconds to a few minutes, depending on your network speed.

Those aren’t your only options for testing your broadband connection; MegaPath also offers a speed test, as well as what it calls Speed Test Plus, which evaluates the quality of your connection in addition to its raw speed. Your ISP might also offer a speed test tool, though you may need to do a little poking around for it. And router manufacturers are increasingly including speed tests in their products’ firmware and/or the mobile apps they distribute with their products (although in that latter case, you’ll be using a wireless connection).

Don’t be surprised if testing on more than one service yields slightly different results. The amount of data each test uses, the latency to and from each server, and the always changing network conditions on the Internet will introduce some unavoidable variability. Time of day will as well; it’s no surprise that you’ll probably note higher speeds at midnight, say, when fewer people will be streaming. That variability is the reason that we run benchmark software multiple times when we test a laptop or CPU, to compute an average. Since the tests take a second or two to run, you can do the same.

Don’t be surprised if you’re not getting the top speed your ISP says it can deliver—almost no one does. But if your connection is significantly slower than what was promised, many different factors could be coming into play. There might be a problem with your equipment, or it could be an issue on your ISP’s end. Most ISPs maintain a tech-support page where you can go to see if they’re aware of any problems with their service. This link will take you to the location of AT&T’s DSL troubleshooter.

If your ISP isn’t reporting a problem, you can start your own troubleshooting by eliminating your equipment as a factor. First try using a different computer. If you get acceptable performance on the second machine, you can’t blame the ISP. If the second computer also has a slow internet connection, run another bandwidth test after each of these suggestions: Try using a different ethernet cable to connect your PC to your router. Try swapping out the cable that connects your router to your internet gateway (your DSL, fiber, or cable modem). Troubleshoot your router: Turn it off or unplug it for a minute or two and then turn it back on. You should always be running the latest firmware on your router, so this is a good time to update it if you haven’t lately. If you’re still not seeing an improvement, try power-cycling your DSL, cable, or fiber modem.

If you’ve jumped through all of those hoops, and you’re still have performance issues, it’s time to call your ISP’s tech-support line.