If you’ve had your PC for more than a few months, it’s probably lousy with dust, dirt, and worse. It’s time to do some spring cleaning on your PC—and I’m talking about the actual hardware here, not your operating system or data files.

Plenty of physical hardware problems crop up on computers after extended use. Dust, dirt, hair, and other debris can build up on fans and heatsinks. Components can come loose or become unseated. Thermal paste can break down and becomes ineffective.

With a little cleaning and basic maintenance—and perhaps a bit of elbow grease—getting your PC back in top condition is easy. Just don’t be afraid to get your hands dirty. You may be surprised at the amount of gunk that accumulates in a PC whose hygiene has been neglected for a while.

Tools of the trade

The first thing you need to do is assemble your gear.

I like to keep canned air, a small (about 1-inch-wide) paintbrush, and a Dustbuster or similar small vacuum on hand. In addition, some paper towels and a bit of all-purpose spray cleaner (like Fantastik or Simple Green) are useful, as are a microfiber cloth, a tube of good thermal paste, and some isopropyl alcohol.

What every dirty PC needs 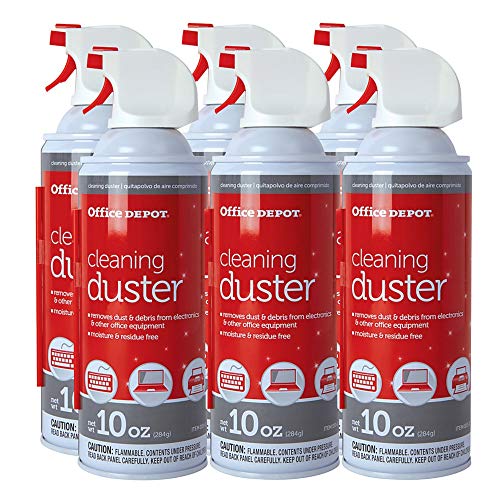 The canned air and brush are useful for dislodging hair, dust and other debris from all of your PC’s surfaces—especially heatsinks and printed circuit boards (PCBs), which have a countless tiny nooks and crannies. The vacuum sucks up the various detritus. The paper towels, spray cleaner, and microfiber cloth are for wiping down hard, nonelectrical surfaces. An the thermal paste and isopropyl alcohol come into play if and when you need to reseat heatsinks.

To practice what I preach in this article, I got my hands on a Core i5-based desktop PC that a smoker had been using (and not cleaning) for a couple of years in a house also occupied by a long-haired cat. Talk about a perfect storm! (Editor’s note: The PC portrayed below is a different, but equally disgusting example.)

The case had dust filters over all of its intake fans and a door on the front that hid the optical drive and front-mounted fans. As soon as I opened the door, I could see that the fan filters were completely clogged, and the vents on the rear of the system were covered with dust and cat hair. Even a small amount of detritus can choke off your PC’s air supply, resulting in higher temperatures that promote system instability and reduce the lifespan of your components. Clogged intake fans can cause negative air pressure within a system, too, forcing the system’s exhaust fans to suck air into the case through any open crevice.

Before opening the system, I recommend vacuuming the dust and debris from the fan filters and other vents.  Next, quickly wipe down the external surfaces with paper towels lightly dampened with spray cleaner. Don’t spray the cleaner directly onto any surface! The liquid could pool somewhere and cause a short.

Now open your PC and inspect its guts. The dust filters on my dirt-encrusted case did a nice job of keeping large debris out, but plenty of dust had still slipped in and built up on the heatsinks and on all of the flat surfaces. To clean the inside of the system, I started by vacuuming up all of the loose debris and ridding the flat surfaces of as much dust as I could.

You could do the same, but be careful: When vacuuming inside a system, don’t use a big, high-powered vacuum and definitely don’t drag the hose or nozzle along the surface of any circuit boards. The last thing you want to do is knock off a surface-mounted capacitor or resistor and suck it up into the vacuum. Use the vacuum sparingly, and focus on gobbling up the largest bits of debris inside the case and on fans, heatsinks, and the like.

Remove and reseat cards and cables

Once you’ve vacuumed up most of the dust and dirt, remove the add-in cards from the system (on my test PC, only a sound card and a video card fell into this category), and reseat all of the power and data cables on the drives.

Removing the cards makes them easier to clean. It also gives you a chance to counteract a phenomenon known as “chip walk” (or “chip creep”), which causes cards and connectors to come loose over time. As the components in a system heat up, they expand slightly. And when they cool down, they contract. Over many cycles of expansion and contraction, add-in cards and socket-mounted chips can creep out of their slots or sockets; reseating the cards and connectors ensures that they remain properly connected.

While the cards are out your PC, I recommend giving everything a solid blast of canned air. If you’re cleaning a particularly dirty system, you may want to do this part outside, because the dust will fly everywhere. Shoot the canned air at all surfaces and into all fans and heatsinks—in the direction opposite to the direction of the fan’s airflow, if possible. If, after vacuuming and using the canned air, you still see dust on a surface (this is common inside thin heatsinks), use the brush to clean out and dislodge the dust, and then fire away at the surface with the canned air again.

The vacuuming, brushwork, and multiple shots of canned air should remove most of the dust and other debris in your PC. Use a microfiber cloth to wipe away any particularly stubborn dust. Never use paper towels to wipe anything down inside a system, because they tend to leave lots of small fibers and dust on textured surfaces. A microfiber cloth leaves nothing behind.

One last tip: If your PC is more than six months old, it’s worth reapplying the thermal paste. The thermal interface material (or TIM) used between CPUs and GPUs and their heatsinks breaks down over time and becomes less effective at conducting heat away from your PC’s components. To replace the TIM, carefully remove the heatsink and clean any old TIM from the heatsink’s base and from the surface of the chip it was mounted to using isopropyl alcohol (or any other alcohol-based cleaner that won’t leave any residue). Once the surfaces are clean, apply the new TIM and remount the heatsink. For detailed instructions on how to apply thermal interface material and how to install heastinks on both AMD and Intel processors, check out our guide to installing a CPU cooler.

Cleaning all of the muck and dirt out of a system can be pretty gross, at least the first time around, but doing it regularly ensures optimal cooling performance and stability. There’s really no downside other than the time spent, which won’t be fun if you’ve neglected your rig for an extended period of time. So get in there and get your hands dirty—your PC deserves a little TLC.