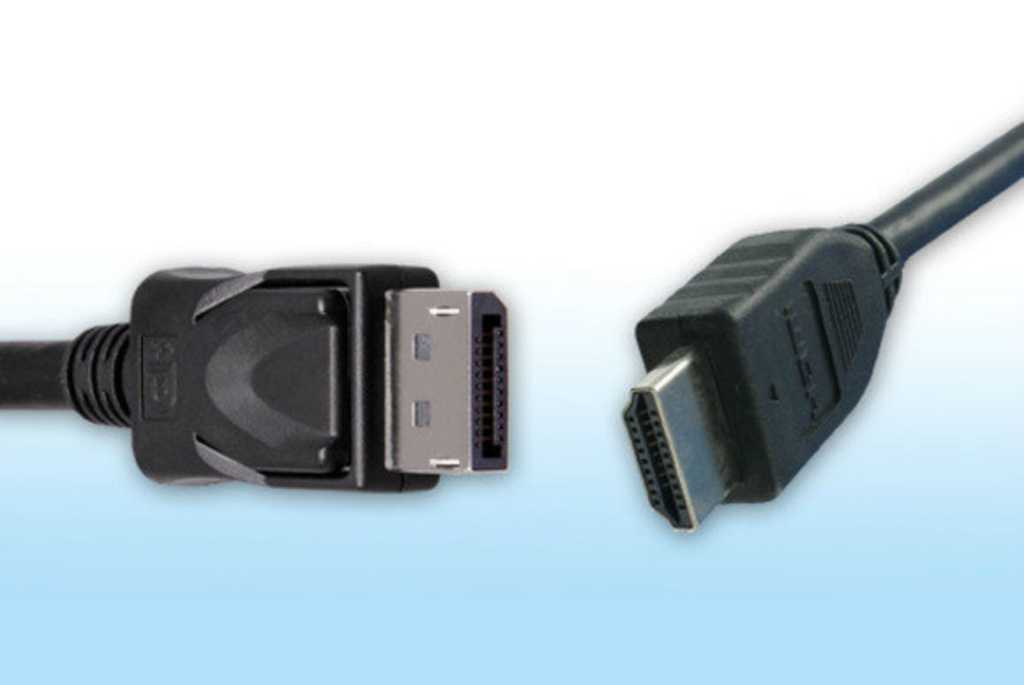 The HDMI audio/video interface standard is everywhere: TVs, set-top boxes, media streamers, Blu-ray players, A/V receivers, gaming consoles, camcorders, digital cameras, and even a few smartphones. You’ll also find an HDMI output port in most consumer desktop and laptop computers, as well as an input port on many all-in-one PCs, to enable a gaming console or a set-top box may use its internal display.

Given HDMI’s ubiquity, you might have forgotten about the other digital audio/video standard: DisplayPort. Though you’ll find it alongside HDMI on most late-model, high-end video cards, as well as in Macs and laptops marketed to business users, it rarely appears in Windows PCs aimed at consumers. It’s also rare as hen’s teeth in consumer electronics devices.

Both HDMI and DisplayPort can deliver high-definition digital video and high-resolution audio from a source device to a display, so what’s the difference and why might you want DisplayPort when HDMI is so common? And what does a future with burgeoning USB Type-C ports hold? We’ll answer those questions and more; but first, the tale of how the two standards came to be, and which entities control them.

The HDMI (High Definition Multimedia Interface) specification was conceived in 2002 by six consumer electronics giants: Hitachi, Panasonic, Philips, Silicon Image, Sony, and Toshiba. Today, HDMI Licensing, LLC, a wholly owned subsidiary of Silicon Image, controls the spec, but some 80-odd vendors are members of the HDMI Forum. Member or not, manufacturers must pay a royalty for including HDMI in their products. They of course, pass that cost along to you.

The DisplayPort specification was developed by, and remains under the control of VESA (the Video Electronics Standards Association), a large consortium of manufacturers ranging from AMD to ZIPS Corporation—nearly all of which also belong to the HDMI Forum. You’ve likely heard the name VESA in relationship to video before. Most TV manufacturers, for instance, adhere to the organization’s wall-mount standard.

DisplayPort debuted in 2006 as part of an effort to replace two older standards used primarily for computer displays: VGA (Video Graphics Array, an analog interface first introduced in 1987) and DVI (Digital Video Interface, introduced in 1999). DisplayPort is a royalty-free product, but that wasn’t enough to overcome HDMI’s four-year momentum. Computers, with their shorter technology cycles and often greater display needs, were another matter.

Fun fact: Of the six companies responsible for the creation of HDMI, only Hitachi and Philips are not also member companies of VESA.

HDMI, recently revised to version 2.1, is capable of supporting bit rates up to 48Gbps. VESA even more recently announced DisplayPort 2.0, which can handle raw throughput up to 80Gbps. At the time of this writing, however, DisplayPort 2.0 had not been implemented in any devices; and HDMI 2.1, which makes many of its features optional, has been fully adopted in relatively few real-world products. Current Samsung 8K TVs, for example, use HDMI 2.1’s increased video bandwidth, but they don’t support eARC for audio transport. LG’s new 8K OLED implements both. This scenario is unlikely to change for a while.

As you can see from the images above and below, HDMI and DisplayPort both have widened their pipes tremendously over the years.

HDMI and DisplayPort are similar when it comes to practical applications, and the industry largely views them as complimentary standards. Indeed, HDMI 2.1 offers VESA’s Display Stream Compression. DisplayPort’s raw specs are certainly more impressive, but HDMI’s capabilities have always been more than adequate for the mainstream A/V market.

Note that both standards can drive older display types, both via adapters and adapter cables: HDMI to VGA and DVI; and DisplayPort to VGA, DVI, and HDMI. Both standards are also backward compatible, falling back to the oldest revision used in a connection.

Here is a chart showing major features and specs for each standard. Click to expand to a readable size.

HDMI and DisplayPort do the same things, but in very different ways, and there are features unique to each. HDMI explicitly supports CEC (Consumer Electronics Control) for controlling entire A/V setups, and an HDMI cable can carry ethernet information. ethernet requires a purpose-built cable as described in Cables section below. DisplayPort supports CEC over an auxiliary channel, but it’s rarely if ever implemented, due simply to DisplayPort’s faint footprint in the consumer electronics world.

Probably the biggest practical difference between the two standards is that DisplayPort can drive four daisy-chained displays and HDMI can drive just two, with implementations of the latter being extremely scarce.

Divide the standard’s total data rate by your result to see how many displays you can use at that resolution with DisplayPort. There’s a handy calculator at KV Audio, although it misidentifies bits per cell (sub-pixel) as bits per pixel in the color depth field. (8bpc = 24bpp, etc.). Just to give you an idea, DisplayPort 1.4a and 2.0 can drive four daisychained 4K UHD displays with 8-bit color depth and a 60Hz refresh rate. You’ll need the newer standard for 10-bit (30bpp) color—or use DSC (Display Stream Compression).

Alternatively, use the chart from the HDMI Forum showing resolutions and their approximate bandwidth. These correlate roughly to DisplayPort.

HDR Support on HDMI and DisplayPort

Both standards support HDR (High Dynamic Range), with its wider brightness and color gamuts, but HDMI 2.0x only supports static metadata (HDR10), while HDMI 2.1 and DisplayPort 1.4a/2.0 both support dynamic metadata (HDR10+, etc).

Audio transmission on HDMI and DisplayPort

HDMI and DisplayPort handle 192Hz/24-bit audio, but with HDMI, that’s only over a single cable connection. That’s fine for high-resolution audio buffs with an HD audio player and an A/V receiver. But to pass audio from a TV tuner or pass it through from a device attached to the TV to an A/V receiver, HDMI 1.4 and 2.0 use ARC (Audio Return Channel), which is limited to two channels of 44.1Hz/16-bit uncompressed audio.

DisplayPort 1.4 and greater has no such issues and can pass uncompressed 7.1, 192Hz/24-bit audio audio to as many as four displays should you ever have the need for such a setup. Previous versions supported this on only a single display or receiver.

HDMI connectors have 19 pins and are most commonly seen in three sizes: Type A (standard), Type C (mini), and Type D (micro). Of these, Type A is what you’ll find on TVs, Blu-ray players, soundbars, and other large A/V components; Type C is often found on smaller devices, such as dash cams; and you’ll typically encounter Type A on phones and tablets. A fourth category of HDMI connector, Type E, is used for automotive applications.

Most HDMI connectors rely on friction to stay in place, although some vendors have developed proprietary locking mechanisms designed to prevent the cable from pulling loose.

DisplayPort connectors have 20 pins and are available in two sizes: DisplayPort and Mini DisplayPort (the latter is the port of choice for Microsoft’s Surface Pro tablet, as well as Macs prior to Apple’s adoption of USB Type-C/Thunderbolt 3). Find one on Amazon.

One thing to know about HDMI cables is that while there is a layout specification (i.e., the number or wires, pin connections, etc.), and the cable type is category 3 (twisted pairs with no shielding required), there isn’t a spec for the materials used in the cable’s construction. Hence, HDMI signals can also be run over CAT5 or CAT6 cable (with a maximum resolution of 1080p), or over fiber-optic cable, according to HDMI Licensing LLC. Active cables with signal-booster circuitry, meanwhile, can be longer and thinner (up to 130 feet, compared to 65 feet for passive cables). Thinner cables are less likely to fail when forced to make hard bends.

That’s all great, but it does muddy the waters a bit for users as to which cables will work with which devices. There is a testing and certification program if you want a logo, but an overbuilt cable from the early days will quite likely work with the more recent standards; i.e., higher resolutions and color depths.

There are currently three bandwidth standards and logos you might see, with a variant of each that re-tasks two wires to carry ethernet. That’s including the new Ultra cables from the HDMI 2.1 spec.

We’ve used any number of HDMI cables, from many eras, without encountering any issues, including passive 25-footers carrying 4K UHD signals. That said, 8K might be different; or it might not. The upshot is that you should try the cables you own with your new devices, and only upgrade them if you run into problems.

The story on DisplayPort cables is a bit simpler in that there’s one basic 5-meter (16 feet) cable design, and only two connectors: full and mini; but as with HDMI, there are types and certification levels, as shown below.

Again, try your cable before you opt for something more expensive, whether it has a label or not. Also, practical experience has shown that VESA’s length specs are very conservative, depending on resolution.

Active copper DisplayPort cables draw power from the DisplayPort connector to operate a signal amplifier embedded in the connector, and they can be considerably longer than passive cables.

Pin 20 in the DisplayPort spec is used for power over Thunderbolt, and was originally used with DisplayPort. However, it caused issues and was dropped from cables if not the connectors. That’s the reason there are both Thunderbolt and DisplayPort cables, rather than one type. Older non-certified DisplayPort cables might have pin 20 connected. Be careful with them, or sell them to someone with a Thunderbolt setup.

As to cable lengths, the shortest you can get away with is the best. Active will be required for very long runs, but what you’ll find for sale at this point in development is a good indication of what’s possible. Again, the story with the latest standards has yet to be written, so after trying your old cables, buy one with the appropriate logo.

Is it a Type-C future?

When USB 3.1 showed up, a corollary standard for a new, updated connector was also introduced: USB Type-C, or as it’s now officially titled—USB-C. The USB Implementers Forum can call it what it wants, but the world at large now refers to it simply as Type-C. That’s a good thing as a feature called “Alternate Mode” allows Type-C ports and cables to be used for other transport protocols, including Thunderbolt, DisplayPort, MHL (Mobile High-definition Link, for cell phones), VirtualLink (for VR headsets), and HDMI.

So far, however, alternate mode is being used almost exclusively for Thunderbolt (which embeds DisplayPort), DisplayPort, and of course USB. Alt-mode HDMI, though available, has yet to show up en masse.

Captains of industry rarely play champion of humanity; however, if the stars align, and they all wake up in a particularly good mood one day, maybe all your consumer electronics and computer vendors will decide on a single cable type. That would be nice for both your pocketbook and the the environment.

Note that DisplayPort 2.0 and HDMI 2.1 might be constrained, as the latest USB spec allows for “only” 40Gbps of bandwidth. Darn, and here we were feeling all warm and fuzzy.

Technically, DisplayPort sounds like HDMI’s awesome big brother, but HDMI can easily stand up for itself in average practical applications. And, as we’ve already pointed out, HDMI had a four-year head start. If you’re talking TVs, A/V receivers, and the like, as well as budget computing, HDMI is what you’re going get 99.9 percent of the time, and it’s more than adequate.

On the other hand, if you’re looking to create a robust multi-monitor setup, you’re talking DisplayPort. That generally requires a discrete graphics card or a higher-priced computer; but with the growing acceptance of USB Type-C ports as a standard, hopefully DisplayPort will become significantly more widespread in all sectors of the market.