I want a PC that performs well in every regard. It needs to be the decathlete of the computing world, a high-performance gaming rig capable of running Windows on at least two displays while handling Photoshop and Premiere Pro editing duties with speed and aplomb. Of course, digital photography and video editing require both good CPU chops and decent GPU performance. And games can be CPU-draining simulators or GPU-punishing virtual worlds–sometimes both at the same time.

Even so, I don’t want to build a computer that requires constant babysitting and tweaking, so in addition to performing well, it needs to be a “fire and forget” system–turn it on, and it runs. That requires avoiding multiple-power-supply setups, custom case fans, and liquid-cooling products that require refilling.

The good news is that you can build this dream system, too. The components are bleeding-edge and therefore pricey, but you can make a few alternative choices to reduce the total cost. Let’s dive in!

We start our powerhouse PC with the best Intel CPU currently available, the Sandy Bridge Extreme Edition 3.3GHz Core i7-3960X. Until now, Intel’s highest-performing CPU was the Core i7-990X, a six-core monster of a processor based on the Gulftown CPU architecture. The problem with Gulftown is that it needs to run on the aging LGA 1366 socket and X58 chipset. Out of the box, X58 lacks modern amenities such as 6-gbps SATA storage connections. But if you wanted lots of PCI Express lanes for multi-GPU setups and triple-channel memory support, it was (until recently) the highest performing system. Gulftown also splits its cache into two, with three CPUs each sharing 6MB of L3 cache (12MB total). Finally, the X58 core logic contains a PCI Express controller.

Intel’s Sandy Bridge architecture is newer than Gulftown, and includes new vector instructions called AVX. It’s faster than the previous generation of quad-core mainstream CPUs, but it’s not really a high-end processor, because Sandy Bridge integrates the PCI Express controller onto the die–and that is limited to just 16 PCI Express lanes.

Sandy Bridge Extreme is actually a variant of Intel’s Xeon server CPU, with a pair of the CPU cores disabled; thus the 3960X really has eight CPU cores, but two aren’t functional. Fusing off two of the cores allows Intel to boost clock frequencies while staying within the 130W thermal design power it set for high-end desktop CPUs.

Installation is a little touchy, though. Intel recommends installing the heat-sink bracket with the screws barely inserted, and then rotating the cooler so that the locking tabs on the cooler match up with those on the bracket. I found it much easier to line up the tabs and then screw in the cooler.

A motherboard using Intel’s X79 chipset is required to run a Core i7-3960X. The X79 uses the LGA 2011 socket format–a necessity for Sandy Bridge Extreme CPUs, since all those extra PCI Express lanes and quad-channel memory components are going to require more pins.

We used the Asus P9X79 Deluxe motherboard, which offers a wealth of PCI Express slots, eight memory sockets, and the ability to have an SSD cache on the secondary hard drive.

The X79 chipset is a single-chip core logic product. It offers an independent PCI Express controller, adding eight more PCI Express lanes to the 40 available with the on-die controller. This design frees up all the PCI Express lanes managed by the CPU’s own controller to be used for graphics, if that’s what you want. Also available are two 6-gbps SATA controllers, four more 3-gbps SATA controllers, and 14 USB 2.0 ports. The key missing I/O capability is USB 3.0; most motherboards add a discrete USB 3.0 controller chip to make up for that. The Asus P9X79 Deluxe has six USB 3.0 ports on the back.

The P9X79 Deluxe also ships with a tiny plug-in card that houses a Bluetooth 3.0 and 802.11n Wi-Fi controller, if you desire those as well. As with most high-end Asus boards, overclocking one or two speed grades is quite simple in the EFI BIOS. The BIOS also contains an automatic-overclocking feature that tests and then sets the memory and CPU clock frequencies to the most stable overclocked settings. I used the auto-overclock settings to push the speed on the Corsair Dominator memory (see the next page) to 2122MHz and the CPU speed to 4.175GHz. For your reference, the BCLK (base clock) setting after all of my tweaking was 126MHz, which affects the clock speeds throughout the system.

Next page: the memory, graphics board, power supply, and storage

A good motherboard and CPU pairing demands exceptional memory, so I popped in 16GB of Corsair Dominator DDR3 rated at speeds of up to 2133MHz.

With the auto-overclocking tool, the memory I used was stable at 2122MHz. Note that it’s also stable at 2133MHz while the CPU runs at its base frequency of 3.3GHz. Clearly, we’ve just scratched the surface with overclocking on this new platform; expect to see clock frequencies north of 4.5GHz on hand-tuned systems.

If you want great graphics, you’ll need to include a pair of Nvidia GeForce GTX 580 cards. The specs are impressive, but keep in mind that it’s not clear whether a bigger frame buffer helps when you’re running games; if you’re using very high antialiasing settings, the extra memory may or may not come into play. However, in this PC we also want to use these cards for GPU computing, and the extra RAM will likely prove useful for that purpose.

Having 1200W on tap is certainly handy, but it’s equally important to have a power supply that’s efficient. I chose the Corsair AX1200 because it’s a single-rail power supply capable of delivering as much current to the GPUs or CPUs as needed. It’s also rated at 80 Plus Gold, which means it runs at 87 percent efficiency or better throughout its output range.

My system idles at just 181W–not bad for a machine with 16GB of RAM, a 130W CPU, and a pair of heavily overclocked GTX 580 graphics cards. Under full load, running the 3DMark 11 benchmark at 2560 by 1600, with 8X antialiasing and all other settings cranked as high as they’ll go, my system’s power consumption maxed out at 660W. It wasn’t that long ago that I built a compact and energy-efficient PC; but this time we’re going all out, and so power consumption is going to be high.

Speed, speed, speed. I’m now hooked on having solid-state drives as my primary boot drives because of their speed. I’ve had very good luck running Corsair SSDs in RAID 0 mode on my production PC, so it was a no-brainer to use Corsair’s new 6-gbps SATA ForceGT SSDs in this dream build. These drives sport the latest Sandforce controllers as well, offering excellent read and write speeds.

Since this PC is intended to be used for content creation, you need a Blu-ray burner, too. The Asus BW-12B1LT is speedy, and makes an attractive addition.

Next page: the case and OS, plus performance tests and the total cost

A Chassis for All Seasons: Corsair Obsidian 650D

I’ve used Corsair’s midrange 600T tower before, and the Obsidian 650D’s internals are almost identical, right down to the external USB 3.0 connection (but with two instead of just one). The 650D offers additional amenities such as a transparent side panel and a top-mounted bay for directly attaching a SATA hard drive or an SSD drive. As a bonus, it’s a little lighter than my 600T, even when fully loaded.

One thing you definitely don’t want is a memory limitation. Although this system currently has 16GB of DDR3, you want the ability to add even more DRAM. That means Windows Home Premium is a no-go, since it maxes out at 16GB. Windows 7 Ultimate OEM is only about $20 more than the Pro version, and picking up that edition gives you access to Media Center. Plus, it runs a wealth of DirectX games.

Let’s take a look at the finished system, and compare it with a relatively stock Sandy Bridge PC: the LAN-party system I built sometime back. That computer has a Core i7-2600K CPU and a factory-overclocked Asus GTX 570 graphics card. Let’s pit the two systems against each other, and toss in a couple of benchmarks that I ran on the insta-overclocked Sandy Bridge Extreme System for good measure.

So with two factory-overclocked graphics cards and Intel’s shiny new Sandy Bridge Extreme chip, this machine is hitting some pretty high scores. Over the next few weeks, I’ll be hammering on it with Photoshop CS5 and Premiere Pro CS 5.5 as well.

Of course, this system isn’t going to be cheap. Let’s break down the price:

If you instead go for a fast 2TB hard drive, a single EVGA GTX 580 SC graphics card (with a 1.5GB frame buffer), a Corsair AX850 power supply, and a Core i7-3930K CPU, the overall price will drop to $2619. If you want to come close to the overall performance of our monster system here, add a second EVGA card, which will push the total up to $3119. That’s still pricey, but it’s considerably less than what we started with. Remember, the price of glory is always high. 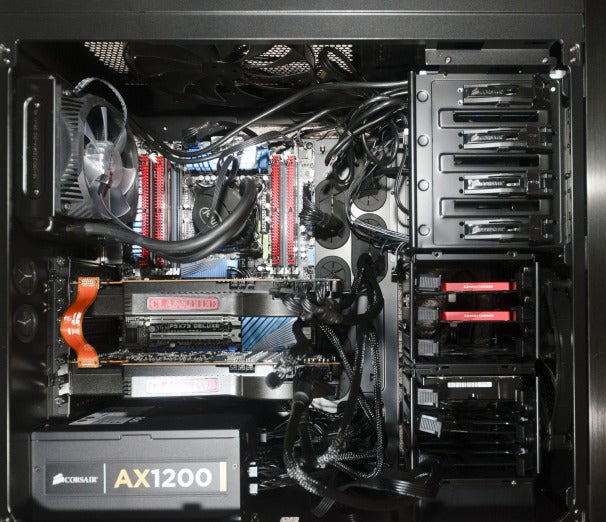