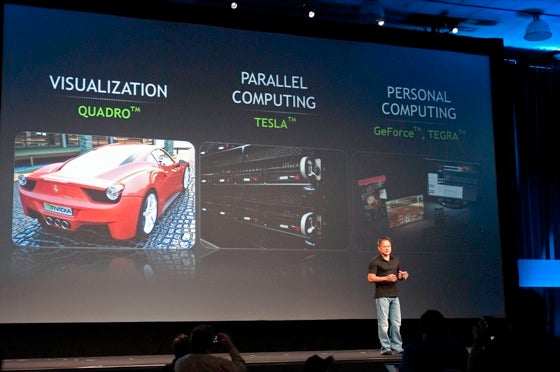 Even before Jen-Hsun Huang’s keynote began, attendees at this year’s GPU Tech Conference had their stereoscopic 3D glasses on, grooving to psychedelic, procedural 3D demos shown on the large projection screen.

Is this the wave of the future–sitting in darkened rooms at every corporate presentation wearing bulky glasses? Probably not–stereoscopic technology is evolving and we may see glasses-free technology in less than a decade.

Of course, even good 3D video doesn’t replace the human presence. Nvidia’s annual lovefest for GPU computing doesn’t focus so much on visual imagery as it does on using graphics processors for parallel compute applications. In fact, a good chunk of CEO Jen-Hsun Huang’s keynote focused on applications that indirectly touch end users. Applications like design simulation application ANSYS and scientific computation application MATLAB are focused on the needs of engineers and scientists who are developing products or conducting research.

Still, there were sexy demos aimed at the hearts and minds of owners of Nvidia graphics cards. Tony Tamasi, Nvidia’s senior VP of content and technology, showed off demos that are well beyond the state of the art of today’s games, but might show up in next-generation titles. Two crash test dummies engage in a duel, with one spewing out noxious green smoke, while the other tries to wave it away with a paddle. The smoke is a volumetric simulation pumping out a billion computational threads. 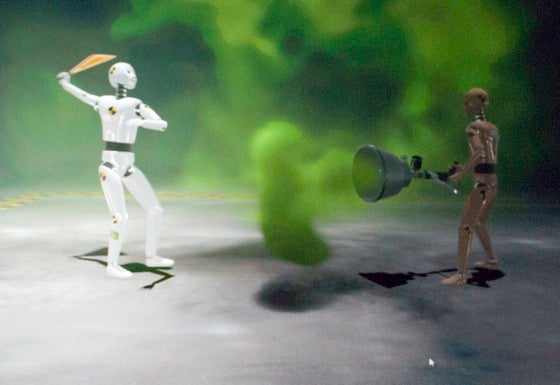 Another demo, called “Infinite City,” flew a virtual camera through a completely procedural city. Objects like highly detailed gargoyles were rendered with only a few polygons. All the actual detail was procedurally generated using hardware tessellation.

On the hardware side, Nvidia announced three more major OEMs to support Tesla based servers: IBM BladeServers, a Tesla addition to the Cray XE6 supercomputer line and T-Platforms, the largest high performance server supplier in the Russian market. HP and Dell are already on board, shipping Tesla-based compute server products.

On the professional front, Discreet and Nvidia partnered to develop a real-time ray tracing renderer for 3dsmax. The really cool part about this is the browser that can run on a laptop. This allows the animations to be published to the cloud, with 32 GPU Fermi servers rendering the animation in real time, and pushed back to the laptop. This frees designers to be mobile when needed, and not need high performance workstations at every location.

Moving to more future applications, Adobe showcased a technology based on plenoptic lenses. 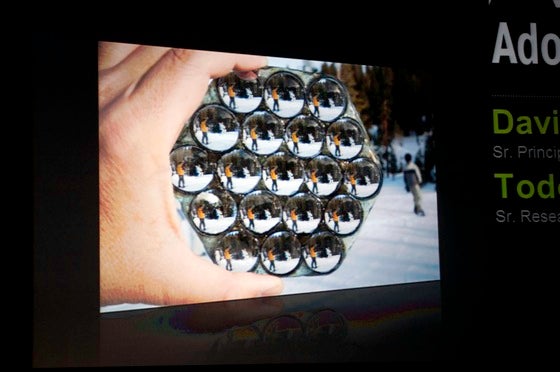 A plenoptic lens is really many small lenses arranged in an array similar to an insect’s compound eye. These lenses all capture slightly different parts of a scene from slightly different angles, onto very large digital sensors. This results in a huge number of small images but the overall image can be huge (in terms of megapixels of data.) Using a GPU allows real time editing of the final image. The neat thing is the ability to digital alter focus. Future cameras built with plenoptic lenses may make blurry, out-of-focus images a thing of the past.

Closing out the session, Huang put up a roadmap of future Nvidia GPU architectures, including code names and rough dates. Following the current Fermi will be Kepler, which pushes performance to double the GigaFLOPS (GFLOPS) per watt over Fermi.

Although Kepler will be built on a 28nm process, Huang noted that process technology won’t enable Nvidia to hit their performance and power targets, so the architecture itself will need to be substantially enhanced. Kepler will also feature more CPU-like features, like virtual memory and non-blocking of the CPU. Kepler is slated for a 2011 release.

Beyond Kepler, in 2012, will be Maxwell. Maxwell will support ECC memory, something needed for large computational servers. Maxwell will be built on 22nm process technology, and Huang suggested performance of up to 4-6 times the current Fermi architecture.