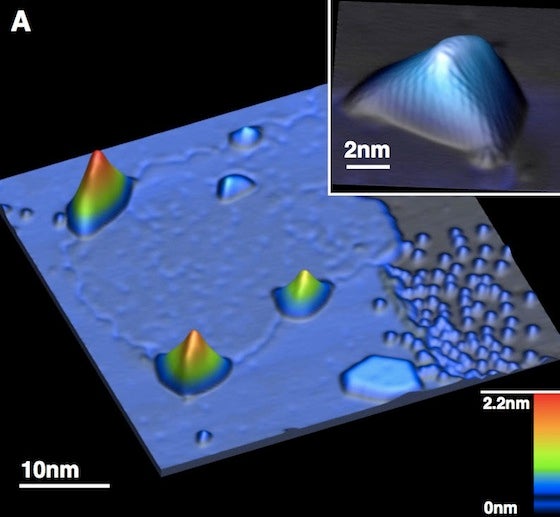 After some hubbub this summer about graphene-coated lithium batteries that charge in minutes, some scientists at the University of California, Berkeley have found another (cooler?) use for the single-atom-thick carbon material. It turns out that they’ve been able to make the electrons in graphene react as if they were exposed to a very strong magnetic field–something that has big implications for how we build the smallest, most basic parts of electronic devices.

Earlier this year, Michael Crommie, a physicist at Lawrence Berkeley National Lab, and a team of 7 other scientists noticed that straining and stretching these thin sheets of carbon as if you were pulling a bed sheet at three of its four corners produced little wrinkles–called nanobubbles.

The electrons around these graphene nanobubbles acted as if they where experiencing up to 300 Tesla of magnetic force–despite the lack of a sufficient magnetic field. (As a point of reference, most MRIs have traditional magnetic forces of up to 3 Tesla. Experimentally, magnets of up to 100 Tesla exist in national laboratories, but they can be dangerous to operate.) Bizarrely, nothing outside of the electrons themselves were affected, so despite the tremendous 300 Tesla force, it was still safe for the scientists to observe the graphene without excessive precaution.

Crommie was particularly excited about the control that the scientists could potentially demonstrate over electrons around the graphene nanobubbles. The ability to control the existence of such powerful magnetic-like forces could potentially lead to the development of smaller, more powerful transistor switches in semi-conductors.

The study is ongoing and Crommie said the team at LBNL is working on reproducing the effect using different substrates (for this experiment, the graphene was grown on platinum, and now the team wants to produce the same effect after growing graphene on other, less conductive materials). As far as their advance towards controlling the graphene electrons for use in electronic devices, Crommie says progress is being made: “You have to create these very complex strain patterns and now we have new ideas about how to achieve this.“