Skip to content
Home / Software / News
Friend lists have been a hallmark of Facebook since the beginning, but now Facebook thinks it’s found a better way in Groups.

Yes, Facebook already has Groups, but that feature is going away as you know it. In its place will be a more open structure, where anybody can add other users to a group, no approval required. The goal, Facebook hopes, will be to create social clusters that evolve naturally, like they do in real life. So you might have one group that consists largely of hometown friends, another for nuclear family and another for your intramural soccer team. 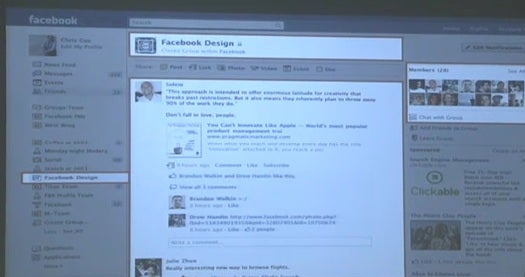 Group members will be able to post messages, chat amongst themselves and send mass e-mails. Like photo tagging, you won’t be able to preemptively block people from adding you to a group. Instead, you’ll get notified, and it’s your job to leave the group if you don’t want to be a part of it.

This is a bold move by Facebook. Zuckerberg said at a press conference today that he expects Groups to eclipse friends lists as the primary way to manage your social connections. “We aren’t trying to be hyperbolic when we say this is going to be a fundamental shift in the way people use Facebook,” Zuckerberg said.

I see Groups as both a smart addition to Facebook and a privacy minefield. At its best, Groups will allow people to communicate in ways they previously weren’t comfortable. If a family group grows naturally where previously it was too much effort, it may encourage more intimate conversations that would never occur over Facebook’s regular news feed.

On the other hand, Groups could easily spiral out of control. One rogue member could derail a gathering by inviting a dozen unwanted guests. Zuckerberg said these kinds of situations will work themselves out through transparency–everyone will know who is the bad seed–but in practice I can think of some troubling scenarios. What if someone doesn’t notice that a person’s been added to the group, and then goes on to gossip about that person in a posting? What if people with a lot of friends gets added to so many groups that they can’t keep up? As always, the opt-out nature of Facebook is a potential pitfall.

The new Facebook Groups starts rolling out today. In addition to this change, Facebook is adding the ability to download all of your personal information–photos, videos, posts, etc.–in a zip file, and a dashboard for controlling and monitoring how third-party apps use your data.