The Mirasol display can show around 45,000 colors, according to the Qualcomm representative I spoke with. While that’s a far cry from what LCDs can handle, it’s still pretty impressive considering Mirasol’s other advantages, and the fact that it’s a new technology. Also, Jesee Burke at Qualcomm says that, “given the reflective nature of our display, measuring colors [on Mirasol] is a very different endeavor than with traditional LCDs,” so the color depth numbers may not be directly comparable.

Mirasol is neither an E-Ink or LCD screen, but it has characteristics of both. It’s a reflective display like E-Ink–there’s no backlight, so it relies on ambient light for the image to be viewable. But like an LCD, Mirasol can handle motion; Qualcomm says it can handle 30-frame-per-second video, but the demo I saw was running at 15fps. 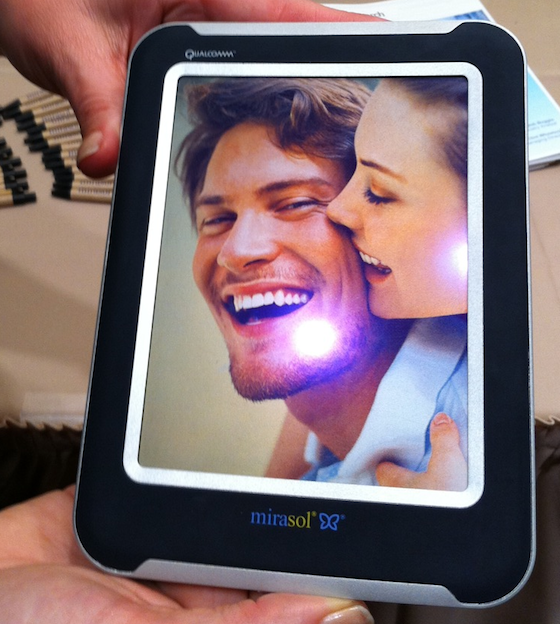 The color wasn’t quite true-to-life–again, the color depth is still somewhat limited on the Mirasol display–but it was still impressive for what Mirasol is. Text was crisp and readable, much like it is on an E-Ink display. We were in a well-lit room, so I couldn’t tell how well it would perform in either very bright or very dark conditions.

In either case, Mirasol appears to be a promising technology. It’ll be interesting to see what sorts of products it ends up in, and how the technology develops from here.