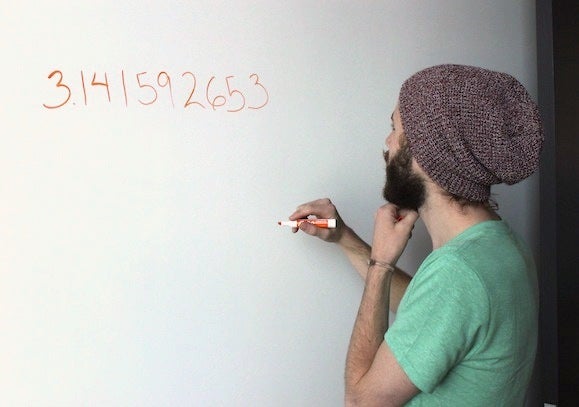 Everybody knows the value of pi is 3.14…er, something, but how many people know where the ratio came from?

It’s hard to pinpoint who, exactly, first became conscious of the constant ratio between the circumference of a circle and its diameter, though human civilizations seem to have been aware of it as early as 2550 BC.

The Great Pyramid at Giza, which was built between 2550 and 2500 BC, has a perimeter of 1760 cubits and a height of 280 cubits, which gives it a ratio of 1760/280, or approximately 2 times pi. (One cubit is about 18 inches, though it was measured by a person’s forearm length and thus varied from one person to another.) Egyptologists believe these proportions were chosen for symbolic reasons, but, of course, we can never be too sure.

The earliest textual evidence of pi dates back to 1900 BC; both the Babylonians and the Egyptians had a rough idea of the value. The Babylonians estimated pi to be about 25/8 (3.125), while the Egyptians estimated it to be about 256/81 (roughly 3.16).Archimedes didn’t calculate the exact value of pi, but rather came up with a very close approximation—he used 96-sided polygons to come up with a value that fell between 3.1408 and 3.14285.The Ancient Greek mathematician Archimedes of Syracuse (287-212 BC) is largely considered to be the first to calculate an accurate estimation of the value of pi. He accomplished this by finding the areas of two polygons: the polygon that was inscribed inside a circle, and the polygon in which a circle was circumscribed (see figure above, right).

Chinese mathematician Zhu Chongzhi (AD 429-500) used a similar method to approximate the value of pi, using a 12,288-sided polygon. His best approximation was 355/113.

The approximate ratio for pi also appears in the Bible in 1 Kings 7:23:

“And he made a molten sea, ten cubits from the one brim to the other: it was round all about, and his height was five cubits: and a line of thirty cubits did compass it round about.”

(I should point out that the Biblical ratio for pi could be more accurate than one might think, since cubits changed depending on a person’s forearm length. So, assuming the Bible isn’t quoting cubits from the same person each time…)

In the 15th century, Indian mathematician Madhavan of Sangamagramam discovered what is now known as the Madhava-Leibniz series (named after German mathematician Gottfried Leibniz, who rediscovered the series in the 17th century), an infinite series that converges to four. Madhavan subsequently calculated pi to 11 decimal places.

Later, in 1707, Welsh mathematician William Jones was the first to use the Greek letter pi (π) to denote the constant ratio, though it wasn’t until 1737 that Swiss mathematician and physicist Leonhard Euler popularized the use of the symbol. The π symbol was taken from the Greek word for “perimeter.”

Shigeru Kondo carried out the longest calculation of pi to date on October 19, 2011. Kondo used Alexander Yee’s y-cruncher program to calculate pi to 10 trillion digits, which is a record calculation for both supercomputers and home computers.

So there you have it—Egyptians calculated pi using pyramids (or did they calculate pyramids using pi?), Archimedes busted out the 96-gon, Zhu Chongzhi one-upped him with a 12,288-gon (or is that 12,192-upped him?), Ferguson calculated 620 digits by hand, and Kondo used a supercomputer to nab the current world record of 10 trillion digits.

But wait—the obsession with pi isn’t just limited to mathematicians and scientists. Pi has a special place in popular culture, thanks to its prevalence in mathematical formulae and its mysterious nature. Even completely non-cerebral shows, books, and movies can’t help but mention the popular constant.

For example, pi gets mentioned in a scene from Twilight, in which vampire-boy Robert Pattinson recites the square root of pi (and on-the-ball Kristin Stewart quickly shuts him down).

The Simpsons is also pretty into pi (and math references in general). In one scene, two young girls at a school for the gifted play patty-cake and say “Cross my heart and hope to die, here’s the digits that make pi, 3. 1415926535897932384…” In another scene, a sign at the Springfield graveyard says “Come for the funeral, stay for the π.”

Yep, whether you like it or not, pi is everywhere. Here are a few more places it’s popped up:

Just think of how excited everyone will get two years from now, when Pi Day falls on 3/14/15.