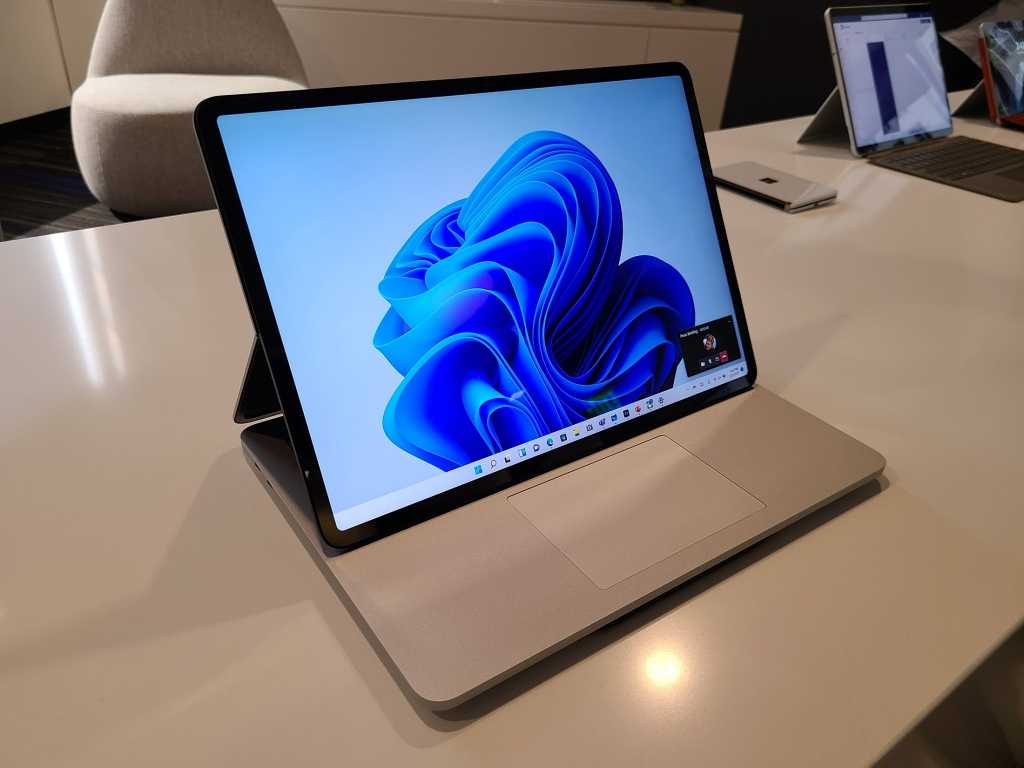 The Surface Laptop Studio won’t come cheaply, though. Microsoft has priced the notebook at $1,599.99 and above, with prices climbing to $3,099.99 for the most premium model. The Surface Studio Laptop is available for preorder beginning today, and will ship on Oct. 5.

With the Surface Laptop Studio, Microsoft has simply swapped one iconic hardware design for another. The original Surface Book defied description. Though it was probably most often used as a traditional clamshell notebook, a detachable hinge allowed it to be used as a tablet. The drawback was that the tablet component lacked a kickstand, making the tablet a bit awkward to tote about and actually use, save for inking. The Surface Laptop, by contrast, is a simply a traditional clamshell notebook PC, and as our Surface Laptop 4 review shows, a pretty good one—even it faces some tough competition.

There’s also a new Surface Slim Pen 2 hidden beneath the keyboard. Microsoft’s Surface Slim Pen 2 doesn’t come bundled with the Surface Laptop Studio, but there’s a new magnetic cubby underneath the keyboard that can be used to dock and charge the new pen. Microsoft’s Slim Pen 2 supports 4,096 levels of pressure, smooth inking, as well as a new haptic motor that simulates the feel of inking on different surfaces—which felt a bit gimmicky during our hands-on time.

If the pull-forward display improves inking for content creation, then Microsoft’s improvements in its camera and input system should improve your next Teams call—key changes considering that Teams chat will be front and center in Windows 11. For one, Microsoft included what executives are calling Windows Hello 2.0: the depth camera goes beyond the visible range to identify you, but the facial tracking is now smart enough to factor in beards, glasses, even surgical masks. Even better, the 1080p front-facing camera on the Surface Laptop Studio can now adjust for the lighting on your face, so that you’ll be in focus and well exposed.

If you need to chat, the Surface Laptop Studio’s keyboard includes 1.3mm of key travel. That’s a big step down from the luxurious 1.5mm that the Surface Book 3 offered, unfortunately. On the other hand, the Laptop Studio now offers what’s known as an haptic trackpad—clickable all the way to the very top.

Throughout the past few years, the internal upgrades dominated the conversation of any new Surface. With the Surface Laptop Studio, both the internal and external improvements are worth talking about.

The Surface Laptop Studio is one of the first major PC platforms we’ve seen that uses Intel’s “Tiger Lake” H35 chip, a quad-core, 11th-gen CPU that Intel launched in January. The Surface Laptop Studio will ship in two configurations: a Core i5-11300H, and an Core i7-11370H. The H35 was designed for ultraportable gaming, with a target of over 70fps at 1080p resolution, generally at “high” graphical settings. That’s in line with the other major addition to the Surface Laptop Studio: A discrete GeForce RTX GPU from Nvidia.

Only the latter Core i7 model will ship with the GeForce RTX 3050 Ti. When Nvidia launched these new GeForce GPUs this past May, the company noted that the new RTX 3050 Ti chips would come with a marked step down in gaming performance on traditional games, with roughly a third of the CUDA cores and half of the tensor cores found in the GeForce RTX 3080 GPU. The Dynamic Refresh Rate feature, too, will be used to enable smooth frame rates at up to 120Hz.

RTX hardware of any stripe qualifies the Surface Laptop Studio as a gaming machine, even if it’s more of an entry-level offering than we had previously hoped for.

We’ve included the Surface Laptop Studio’s basic features below, followed by the prices. Our earlier Surface Book 3 review includes those features for comparison.

Editor’s note: This article originally published on Sept. 22, but was updated on Sept. 23 to include a video of our hands-on impressions.