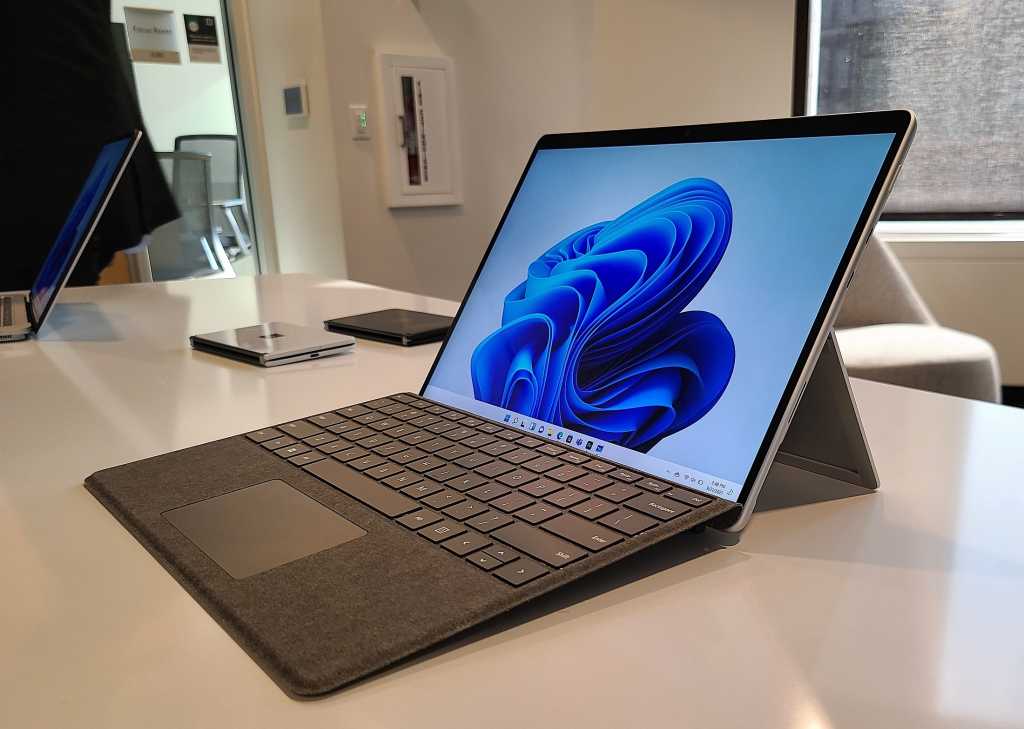 Microsoft announced three new Surface tablets on Wednesday, including a larger, more powerful Surface Pro 8, a new Surface Go 3 that boasts options for a faster Intel Core i3 processor, and an updated Surface Pro X. Microsoft’s Surface Pro 8 boasts Thunderbolt ports for the first time, integrated LTE, Slim Pen integrated storage and charging, as well as a new display that can run at up to 120Hz.

The new updates to Microsoft’s tablet lineup are on par with what we expected from this Surface launch, with Windows 11 looming on October 5, though Microsoft’s quick pace of recent tablet introductions means that there’s not as much of a performance gap as with prior generations.

However, the new Surface Pro 8 is arguably defined more by its external features, a welcome update to a Surface Pro lineup that has remained somewhat static in its look and feel for several years. Interestingly, Microsoft disclosed that the Surface Pro 8 is part of Intel’s Evo platform, reserved for special, intensive collaboration between Intel’s engineers and the laptop manufacturer.

Here, Microsoft is introducing a slightly larger 13-inch (2,880x 1,920) multitouch “PixelSense Flow” display that preserves the 3:2 screen ratio, versus the 12.3-inch (2736×1824) displays we’ve traditionally expected as part of the Surface Pro lineup. Microsoft says the screen will run up to 120Hz, a first for the Surface tablets, designed around the new Dynamic Refresh Rate technology that Microsoft implemented for smoother e-ink experiences. The Surface Pro 8’s display is up to 12.5 percent brighter (versus what, we don’t know) with an ambient sensor that will detect both external lighting and color to adjust the display accordingly. Finally, Microsoft has added Dolby Vision HDR support, not surprising given the AutoHDR feature that’s arriving with Windows 11.

Microsoft’s new Surface Pro 8 also includes a pair of Thunderbolt 4 ports, indicative of how its Surface Pro X tablet has influenced the design of the Surface lineup.

As it did during the transition between USB-A and USB-C ports, Microsoft is treading lightly here. In addition to the two Thunderbolt 4 ports, the Surface Pro 8 tablet still includes a Surface Connect port. This will presumably allow the Surface Pro 8 to charge itself either via the included 65W Surface charger, or via a more conventional USB-C charger—Microsoft said that you’ll be able to quick-charge your Surface Pro 8 to 80 percent in “just over an hour,” with a total of 16 hours of available battery life. The addition of Thunderbolt 4 also means that users will have a choice between the pricey Surface Dock and the broader ecosystem of Thunderbolt docks, as well.

Physically, the Surface Pro 8 is surprisingly a bit smaller than its predecessor, even with the larger screen—that likely means that the bezels have shrunk significantly. But at 1.96 pounds, it’s also slightly heavier. Black isn’t a color option this time around, with Platinum and Graphite as the available choices.

We do know, however, that the new Surface Pro Signature Keyboards will still be sold separately, as well as the Slim Pen 2. You’ll still have the option to use older Surface Pro Type Covers with the new Surface Pro 8, but you obviously won’t be able to take advantage of the new pen cubby or charging features with those.

Finally, there a few other subtle bonuses: Cellular connectivity appears on the majority of the Surface Pro 8 models, though there’s still a Wi-Fi only option on the low end of Surface Pro 8 commercial offerings. Inside the Surface Pro 8 is a Qualcomm Snapdragon X20 LTE modem, supporting both removable SIM and eSIMs. Microsoft doesn’t list a SIM slot among its port selection, however, so it’s possible only eSIMs will be supported.

Microsoft’s Surface cameras have been beefed up too, with a more powerful 10 megapixel rear camera. Interestingly, Microsoft has taken the user-facing camera and has added sensors that adjust for exposure and color. In other words, the display will now expose your camera during a Teams call properly, lighting your face to best advantage. The Surface Pro 8 also includes a color sensor that will adjust the display’s color to compensate for the ambient light, a nifty touch.

The most noteworthy feature of the new Surface Go 3 is its updated processor, which now includes a quad-core 10th-gen Core i3 in addition to a dual-core 10th-gen Pentium Gold 6500Y processor. If you’re willing to risk owning a Windows tablet with just 4GB of RAM (we wouldn’t) then prices will start at $399.99 and go up from there. Otherwise, the Pentium Gold model with 8GB of memory is $549.99. You can preorder today, with delivery on Oct. 5.

Interestingly, Microsoft’s LTE options now extend down to the minimum configurations, too, rather than remaining a premium offering. Microsoft executives said that had been a customer request for the Go 3, which is now seen as a PC for individuals within a family, rather than sharing a family PC. There’s a new 256GB storage option. But Windows 10 S—sorry, Windows 11 S—is still the default consumer OS.

Otherwise, the Surface Go 3 appears to be largely unchanged from its predecessor, the Surface Go 2—an otherwise nifty little tablet that still had some price/performance issues in its previous generation.

Microsoft’s Surface Pro X tablet has been left largely unchanged since its launch in 2019 and the somewhat middling review of the Surface Pro X we handed out later. Since then, it’s been updated with a faster SQ2 processor in 2020.

Now, in late 2021, Microsoft is adding a Wi-Fi only option to its former LTE lineup. Microsoft would also like you to know that Windows 11 on ARM includes 64-bit X86 emulation by default now, so Windows emulation problems on Arm chips should hopefully go away, mostly. We’re told that some apps still won’t work because of incompatible graphics drivers.

Microsoft also provided prices for its various accessories, including the new Surface Slim Pen 2, a standalone Slim Pen 2 charger, the new Signature Keyboards, and more. A new Ocean Plastic Mouse is made of 20 percent plastic that Microsoft and its partners reclaimed from the ocean—not oceangoing plastic like some competitors use, but actual plastic reclaimed from the ocean.