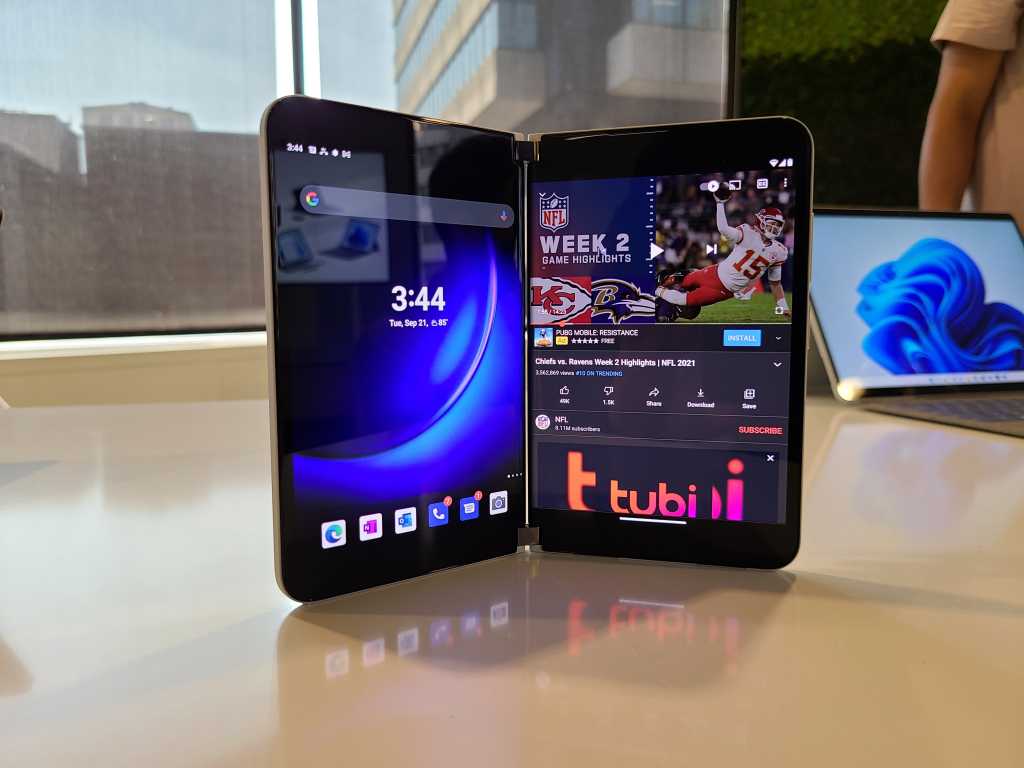 Microsoft’s original Surface Duo folding phone designed in some serious flaws. The Surface Duo 2, to its credit, appears to have at least addressed them.

When Microsoft launched the Surface Duo folding phone a year ago, Microsoft executives preceded it with a gauzy veil of hype that concealed the many flaws reviewers noted: a poor camera, a lack of NFC and 5G, a subsequently poor track record of patches and updates, and an interface whose bugs made the dual-screen interface painful to use.

Microsoft’s Surface Duo 2 arrives today, available for preorder for $1,499.99 on up, with shipments starting Octobr 21. That’s about the same price as Microsoft’s earlier Surface Duo. Can the new phone fix the flaws of the first? On paper, it takes a good first step.

For one, Microsoft now offers a three-camera bump on the back of the Surface Duo 2: a 12 megapixel f/1.7 wide angle camera with optical image stabilization (OIS), a 12Mpixel f/2.4 telephoto OIS lens, and a 16Mpixel, f/2.2 ultrawide. Digital zoom will go up to 10X, Microsoft says, and video can be recorded at up to 4K/60. The selfie camera—the only camera on the original Surface Duo—shoots 12Mpixel photos at f/2.0.

Microsoft has a fantastic legacy of cameras on its Lumia lineup, but it’s likely at least some of the talent left when Microsoft killed off Windows Phones. A few test shots when we got a brief hands-on with the Surface Duo didn’t tell us much. On paper, at least, there’s a dedicated night mode, which will have to go a long way to keep up with AI photography in cameras like the Google Pixel lineup and others.

The Surface Duo 2 also launches with 5G capabilities and NFC. The latter may have been a curiosity pre-pandemic, but early concerns about the transmissibility of the coronavirus via touch made hands-free everything, including payments, a must-have. Bluetooth 5.1 and 802.11ax appear here, too.

The fundamental advantages of the Surface Duo 2 haven’t gone away. The ability to interact with one app on one screen (the Duo 2 has larger 5.8-inch AMOLED screens at 1344×1892, or 401 PPI) and a second app on another is a key advantage that the Surface Duo 1 and 2 offers compared to most phones. There’s even a new glance screen feature, which uses the curved edge of the glass on the edge of the device to signal an incoming call, with a glowing colored bar that signals new messages await.

Surface Duo 2 configurations will include 128GB ($1,499), 256GB ($1,599) and 512GB ($1,799) price points. Interestingly, while every other Surface Microsoft announced (the Surface Laptop Studio, the Surface Pro 8, and others) lists a ship date of October 5, Microsoft is launching the Surface Duo 2 on Oct. 21. Apparently Microsoft is building in some extra time to get it right.