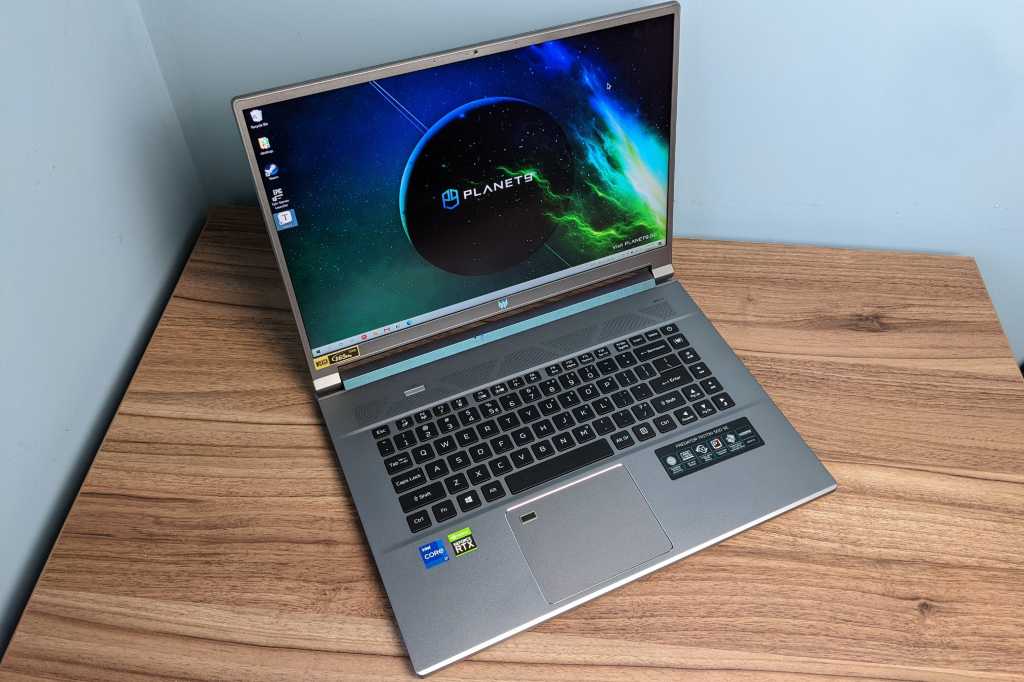 Instead, it falls into a burgeoning category of more work-friendly gaming rigs, joining the likes of the Asus ROG Zephyrus G15, Gigabyte Aero 17, and Dell XPS 17 9710 in toning down its wild side. There are no racing stripes or flashy LED patterns here, and the 2560 x 1600 resolution screen has a taller 16:10 aspect ratio to help with regular old office work.

Yet the Acer Predator Triton 500 SE is ready to party when needed, with an Intel Core i7-11800H CPU, an Nvidia GeForce RTX 3060 Max-Q GPU, and a 165Hz refresh rate display for super smooth gaming (and, to be honest, web browsing). While some games don’t play nice with a 16:10 aspect ratio, and the display could be more vibrant, overall this is a solid value for a laptop that’s equally comfortable at work or play.

The other specs and ports hold firm regardless of configuration, but keep in mind storage is expandable via an empty M.2 SSD slot. The only catch is that it sits underneath the mainboard after you’ve opened the laptop with hex screws, so it’s not an easy upgrade.

At least from afar, the Predator Triton 500 SE’s silver aluminum finish and boxy enclosure does not scream “gaming laptop,” but it can’t resist its share of flourishes. Acer’s Predator logo graces the lid and the bezel beneath the display, while a “Turbo” button sits in the middle of the laptop’s trapezoidal speaker grille, revving up its three internal cooling fans when pressed. Meanwhile, exhaust vents line the laptop’s entire back edge, helping those fans exchange air.

The display’s 165Hz refresh rate also a treat to the trained eye, as it makes everything look smoother, from mouse movements to web page scrolling to fast-paced gaming. The 500 nit matte panel helps the screen stay legible in bright sunlight, and the resolution of 2560 x 1600 is sharp enough to make individual pixels invisible without the overkill of 4K.

That said, it’s not the most vibrant display—it doesn’t support high dynamic range or 100 percent of DCI-P3 color space like some other premium gaming laptops—and it had an excessively greenish hue out of the box. Mucking around with Intel’s Graphics Command Center software helps, but that really shouldn’t be necessary.

While keyboards and trackpads sometimes get short shrift on gaming laptops, Acer made them respectable on the Predator Triton 500 SE. The keys are snappy without feeling overly stiff, and the laptop’s sturdy base helps prevent any feelings of mushiness as you type. Tapping the Predator key also brings up the Acer’s PredatorSense software, where you can change the colors and patterns on the keyboard’s three backlighting zones.

The trackpad doesn’t disappoint either, with a smooth glass surface that never succumbs to friction. That feeling of smoothness is reinforced by the high refresh rate display, which eliminates the subtle cursor jitter you find on standard 60 Hz panels. The clicking mechanism is somewhat stiff, however, especially as you move your way up the touchpad.

Like most Windows laptops, the Acer Predator Triton 500 SE has a 720p webcam, which is adequate for videoconferencing but on the grainy side for aspiring Twitch streamers. That said, it does support high dynamic range, which helps improve the picture in subpar lighting conditions. The laptop’s microphone produced clear, unmuffled audio, but volume was on the quiet side on default settings. (Boosting the mic in Windows’ Sounds menu helped.)

For security, the Predator Triton 500 SE has a fingerprint reader built into its touchpad, but it doesn’t support face recognition via Windows Hello. It also skips out on including any kind of privacy shutter or kill switch for the webcam, which is a letdown on a laptop of this price.

Speaker quality could be better as well, even by laptop standards. Despite the presence of upward-firing speakers running the length of the keyboard, audio lacks character and offers middling maximum volume levels.

Though it certainly has the bulk of a gaming laptop, the Acer Predator Triton 500 SE does a fine job balancing both productivity and gaming duties. It stays quiet while browsing the web and editing documents—you’ll have to listen closely to hear any fan noise—and doesn’t get uncomfortably warm in your lap.

The Predator Triton 500 SE also turned in solid benchmark scores, and had no issues keeping up with 1440p, 60 frames-per-second gaming—the gold standard—at high graphics settings in the games I tested.

On the work side, the Predator Triton 500 SE’s PCMark 10 score of 6,966 topped several other laptops we’ve tested recently, including the Dell XPS 17 with the same Intel Core i7-11800H CPU. That processor is obviously overkill for basic office tasks, but the Triton’s score in PCMark’s Digital Content Creation subtest (9,366) was also ahead of its peers.

Handbrake is a more intensive test, illustrating how the processor holds up while encoding a large video file. The Predator Triton 500 SE stood out here as well, holding its own against the AMD Ryzen processors whose additional cores tend to make quick work of this test. It encoded our test file in a little over 20 minutes, perhaps due to a combination of its larger 16:10 footprint and its triple-fan cooling system to keep the CPU from throttling down.

Cinebench, meanwhile, performs a quick stress test of CPU performance. While the Triton didn’t fare quite as well as Dell’s XPS 17 in this test—at least in multi-threaded performance—it overall proved to be quite nimble.

The Predator Triton 500 SE did lose out to its cheaper 300 SE sibling in Rise of the Tomb Raider’s benchmark tool, but not by much.

Anecdotally, I never had to compromise on resolution or graphics quality while playing No Man’s Sky, Nioh, Descenders, or Apex Legends, even on the system’s default settings (which is what we test at). In Apex, Steam’s framerate meter tended to float around 85 frames per second, ticking up by about 10 frames per second when I activated the laptop’s Turbo fan mode. (I’d suggest playing with headphones if you do this.)

Battery life was admirable as well, thanks to the huge honking 100 watt-hour battery that Acer stuffed inside. A runtime of 8 hours and 39 minutes in our looping video playback test is solid for a gaming laptop, but you should still expect to need a charger before the workday is done, even before you get to play any games.

For everything that’s on offer, the Predator Triton 500 SE is both a remarkable value and impressive balancing act. Gaming laptops with high refresh rates tend not to come in 16:10 aspect ratios, and the one notable exception—Dell’s XPS 17 9710—has both a standard 60Hz display refresh rate and a higher price ($2,099, when similarly equipped) to boot.

While the Triton is by no means inexpensive at $1,750, it’s a reasonable ask for its combination of portable gaming and productivity on an ultra-smooth screen. Best of all, you might not even be embarrassed to be spotted with it.