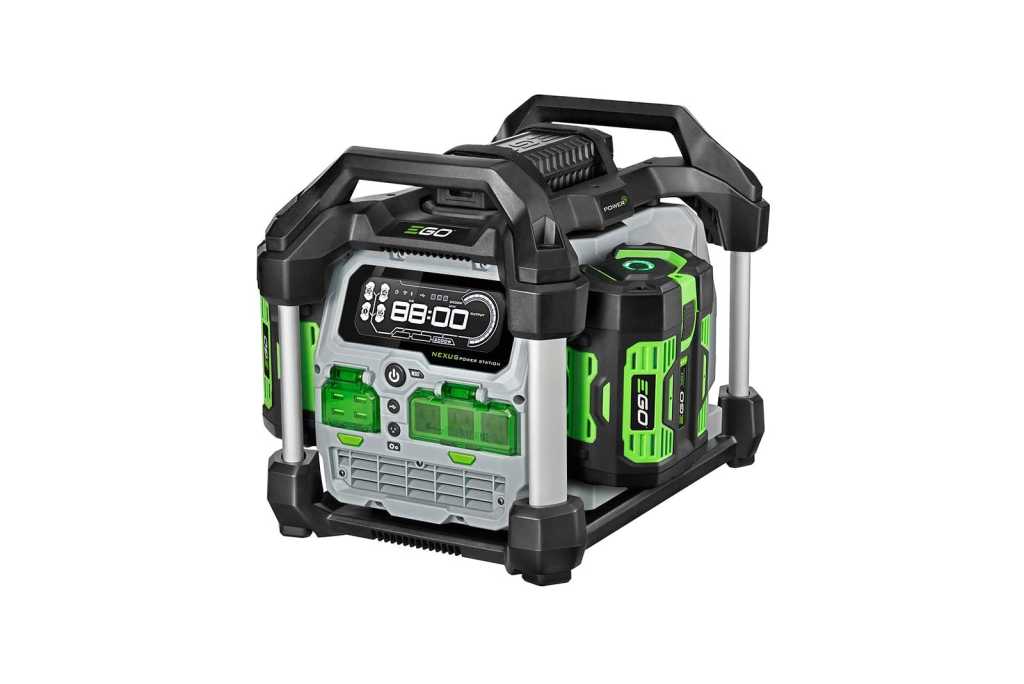 The Ego Power+ Nexus Portable Power Station is a convenient and worthwhile addition to your home or garage if you’re already heavily invested in Ego products. Outside of that, there are better options.

The Ego Power+ Nexus Portable Power Station is easily the most versatile and complete power station I’ve ever reviewed. It uses the same Ego batteries that the company uses in its product lineup of popular outdoor tools and equipment, such as a leaf blowers and lawn mowers.

The station itself is hefty, weighing 30 pounds without a battery installed. It’s designed to withstand any abuse you can put it through (within reason, of course), and is even weather-resistant to withstand an occasional light rainstorm or the cold.

There are handles all around the unit allowing you to use two hands to move it—and when it’s fully loaded with a maximum of four batteries, you’ll appreciate the extra help.

Ego sent me the power station and two of the company’s 56V/7.5Ah batteries. Each battery is available on Amazon for $479, but keep in mind, these batteries aren’t used only with the company’s power station. They can be used with any of Ego’s products—from a snow blower to a chainsaw to a lawn mower.

In fact, if you already have an Ego product around your home, that battery will work with the Power+ Nexus Power Station. You can use it as both a charging station to keep all of your batteries topped off, and as a battery backup should you lose power or need power for a weekend trip.

On the front of the station is a big, bright display that shows how much battery power is left, including the exact amount of time it expects the charge to last. Conversely, when charging the batteries installed on the station, it’ll show you how long until all batteries are full. Each battery slot is represented on the display, letting you know that the station has properly recognized the pack. It also indicates which battery is being charged, and its current level.

You can even connect your smartphone to the station via Bluetooth or Wi-Fi to view its current stats. Helpful if you want to make sure the batteries are fully charged before heading to bed, or just check on its status in general.

There’s a power button on the front of the station, along with buttons for the USB section of ports, and an AC button to turn on the standard wall outlets. Both sections of ports have a protective cover that is opened with the press of a button.

Testing the Power+ Nexus was sort of a challenge, only because the results and performance will differ based on which batteries you have connected to the station itself. The station and two-pack of batteries I mentioned earlier are essentially what I tested, just as a point of reference.

Charge time for the two 56V/7.5Ah batteries was 7 hours and 46 minutes, which isn’t bad considering that there’s a total of 840Wh of power between the two packs.

When it comes to efficiency, though, the Power+ Nexus and its battery packs are somewhat of a letdown. I ran the rundown test more than once because I wanted to ensure the results were accurate. Connecting a PortaPow power monitor and DROK load tester to one of the USB ports, I measured a maximum of 280Wh of expended energy. That’s the worst efficiency out of all power stations I’ve tested so far.

Connecting a 4W desk lamp to the power station with the same two batteries, the Ego Power+ Nexus was the first power station to tap out. However, the lamp stayed on for 26 hours and 3 minutes.

But, that performance is right in line with Ego’s estimates for the power station, based on the data sheets included on the product listing page. One of the images shows that Ego expects two 7.5Ah batteries (the same as I tested) to power a 60W light, 80W LED TV, and 6W Wi-Fi router to last 4 hours and 24 minutes.

The Ego Power+ Nexus Portable Power Station is a convenient and worthwhile addition to your home or garage if you’re already heavily invested in Ego products. It’s a single place to charge your batteries, and it serves a secondary purpose for the batteries that normally power your lawn mower or leaf blower when not in use.

For those who are simply looking for a power station, there are more affordable options with better performance.