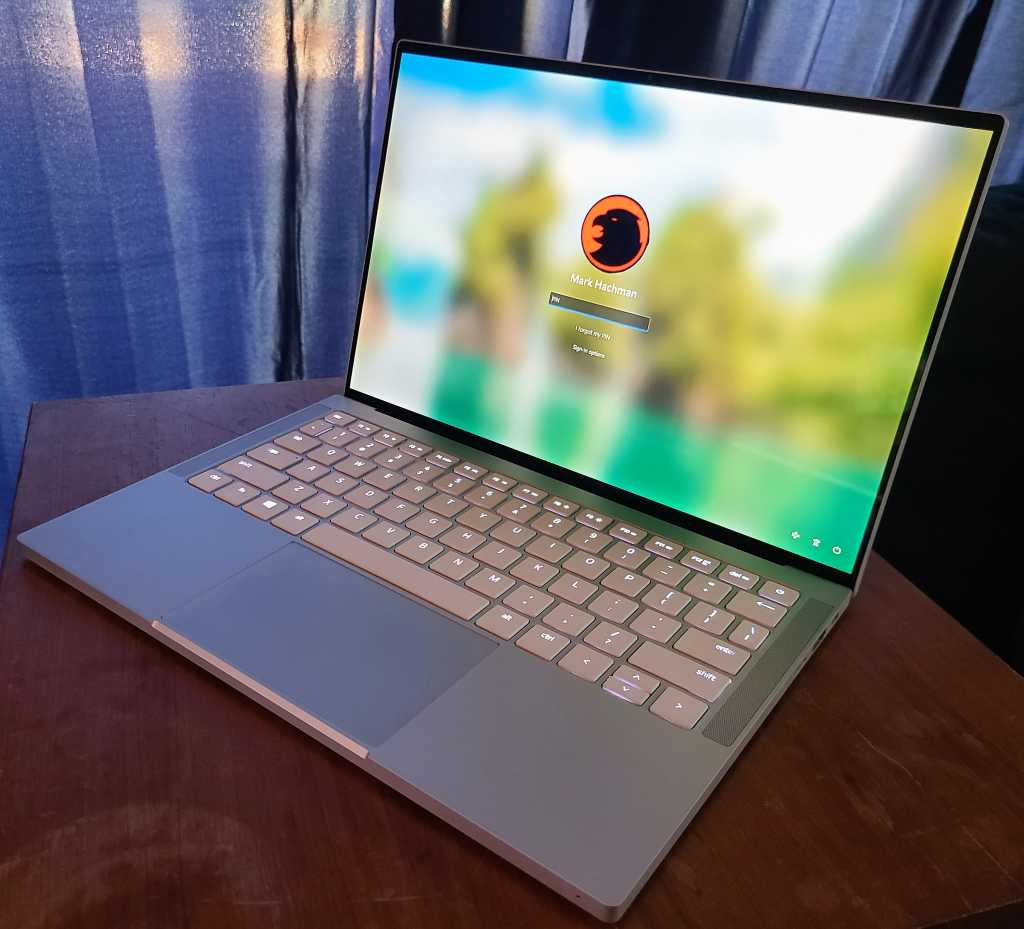 Adding a few hardware tweaks alongside Windows 11 doesn’t really change our opinion: A lousy keyboard torpedoes what Razer set out to accomplish with the Razer Book, a slickly designed laptop that ships without bloatware.

Razer updated its Razer Book productivity laptop for the fall and the launch of Windows 11, and we were eager to see if anything had materially changed. To some extent, performance was slightly affected. But the strengths — and flaws — of the Razer Book remain largely identical to our review of a similar model a few months ago.

The Razer Book that we tested represents a slight upgrade over the older Razer Book that Razer launched in March. For one thing, all of these new Razer Books ship with Windows 11 preinstalled, while the earlier versions offered Windows 10 and the promise of a later upgrade to Windows 11. Our review model, with a Full HD (1,920×1200) display, 16GB of RAM and 512GB of SSD storage, is now priced identically to the older model (RZ09-03571E92-R3U1), which was discounted to $1,499.99 from its original $1,699.99 MSRP.

There are slight differences between the older models and the updated Razer Books, however. Each display has now been individually factory calibrated, for example, with a new anti-reflective coating. Razer also appears to have bumped up the memory speeds a bit, to 4,267MHz LPDDR4x versus a more generic dual-channel memory architecture on the older Razer Books. Razer also answered our criticism that there were no Razer Books available with anything more than 256GB of storage without buying a 4K screen; our FHD review unit has 512GB of storage. (You may need to order directly from Razer via our shopping links below to ensure you’re buying the updated model. At press time, Amazon was still selling the older model, and it’s not clear whether the retailer will simply swap them out for the newer version, or not.)

Below, we’ve used an abridged version of the PCWorld review format, since this “new” Razer Book isn’t really all that new. We’ve tested this Razor Book, however, and we have updated performance charts for you to peruse based on the new configuration. Finally, we can confirm that the keyboard is still lousy.

(Editor’s Note: This review leans heavily on Jared Newman’s Razer Book 13 review that we evaluated in March, including subjective analysis of various aspects.)

The updated Razer Book 13 that we reviewed includes the following tech specs:

With a silver aluminum finish and 16:10 screen aspect ratio, the Razer Book 13 looks quite a bit like an Apple MacBook. Razer’s laptop includes a white keyboard instead of black, however, and it’s flanked by speaker grilles.

The Razer Book 13’s display boasts a more productivity-friendly resolution of 1920×1200 instead of the usual 1920×1080. There’s still an IPS display, which excellent viewing angles, but at times the level of contrast can seem low. Though the displays on this new Razer Book are now individually calibrated, we’re pretty sure that you wouldn’t notice a difference unless you performed a side-by-side comparison.

Likewise, we can confirm that the Razer Book 13’s keyboard is still bad. As Jared Newman wrote in our earlier review: “The core issue is that the Razer Book 13 can easily miss keystrokes unless you press down around the center of the key. I type pretty quickly, and while it would feel like I was hitting each key, my fingers didn’t always land with the accuracy that Razer requires. That meant I frequently had to go back and correct mistakes. The Razer Book 13’s somewhat rigid keys and low travel compound the problem, as does its perplexingly mushy spacebar.”

The other problem is the RGB lighting. It’s distracting and unnecessary for a productivity notebook, and must be turned off using the Razer Synapse software.

Razer hasn’t made any noticeable improvements to the webcam. Razer’s audio, though, is terrific — but only if you go into the included Realtek audio console, click the settings gear, and then manually enable the graphic equalizer. Otherwise, the audio, as Jared Newman noted, does sound muddled and without much bass response. Turn on the equalizer, though, and there’s a significant difference to my ears.

For whatever reason, we did see some differences in performance between the older Razer Book 13 and the new model we were sent with Windows 11 preinstalled. We present our findings below. We’ve preserved the comparisons from the earlier review, but also added the new numbers for comparison.

Handbrake measures how long the notebook takes to transcode a video file using the CPU. Here, the Razer Book 13 performed very well, crossing the finish line behind only the Acer Swift 3X.

We measured the Razer Book’s performance in Cinebench, which stresses all of the CPU cores (as well as just a single thread, in a separate test) in rendering a scene. The older Razer Book with Windows 10 performed much better in this test for some reason.

The 3DMark Time Spy test measures 3D performance. Here, the Razer Book didn’t offer anything special. It’s roughly in line with other laptops that use an Iris Xe GPU.

Finally, we measured batter life. We didn’t expect too many differences from the older Razer Book, and we weren’t disappointed. Almost 13 hours of battery life is still excellent.

Is this updated Razer Book 13 any different than the earlier model? Not materially. This new Razer Book does allow us to wonder whether Windows 11 has affected the performance, or if there have been some behind-the-scenes tweaks, too.

Here, we’ll defer to Jared Newman’s earlier conclusion, which is still valid: While the Razer Book 13 is pricey given its tech specs, paying more for slick design and no bloatware isn’t an outrageous prospect. Paying more despite a subpar keyboard, however, is a much tougher sell.