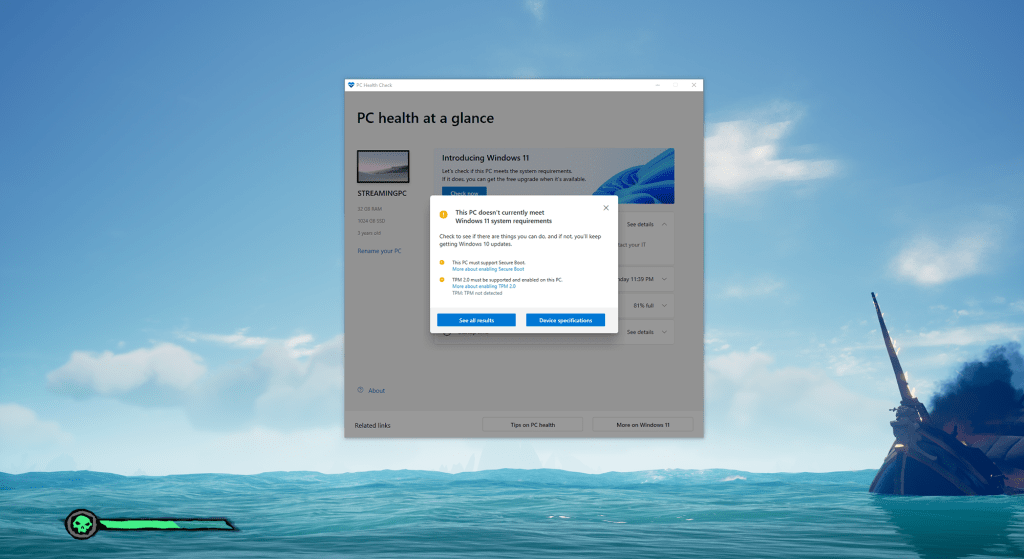 Microsoft said last week that it will soon begin pushing its controversial PC Health Check app to all PCs, partly to prepare them for the Windows 11 transition, but also to provide users with a dashboard to monitor the ongoing health of their devices.

The update, officially known as KB5005463, will install PC Health Check on all Windows 10 devices via Windows Update—but, interestingly, not on devices that have already upgraded to Windows 11. (The update’s existence was previously reported by ONMSFT.com.) Microsoft does say, however, that PC Health Check can also be uninstalled after it downloads, via the Windows 10 Settings menu (Apps > Apps & Features > App list (Windows PC Health Check) > Uninstall).

It’s understandable if your first instinct is to remove PC Health Check, since that was one of the focal points of Microsoft’s heavily-scrutinized TPM requirement for Windows 11. PC Health Check was originally designed to provide a “pass/fail” recommendation for your PC, letting you know if it would be upgradable to Windows 11. Microsoft then went back and forth on its hardware requirements for Windows 11, eventually landing on a compromise that PCs without the “supported” hardware required by PC Health Check would be able to upgrade to Windows 11, but without updates. Well, some updates—anecdotal reports say some unsupported PCs are receiving Windows 11 updates, but they’re not guaranteed.

All of the confusion helped lead to our conclusion that you shouldn’t upgrade to Windows 11 for now. But Microsoft hopes that the added value offered by the other features of PC Health Check will inspire you to leave it alone for now. The company has published a list of features that PC Health Check will provide:

Windows 11 eligibility: Provides a comprehensive eligibility check based on the minimum system requirements for Windows 11.

Backup and sync: Sign in or create a Microsoft account to sync device preferences across devices and set up Microsoft OneDrive to protect your files.

Storage capacity: View the storage usage for the main drive that contains files, apps, and Windows.

Most of these capabilities aren’t new; they’re simply found elsewhere in the operating system, usually within the Settings menu. All Microsoft is doing is pulling them out and organizing them into a specific dashboard. Will Microsoft push PC Health Check as a way to push people to Windows 11? It certainly appears so. But for now, Microsoft is trying to sweeten the deal with additional features.