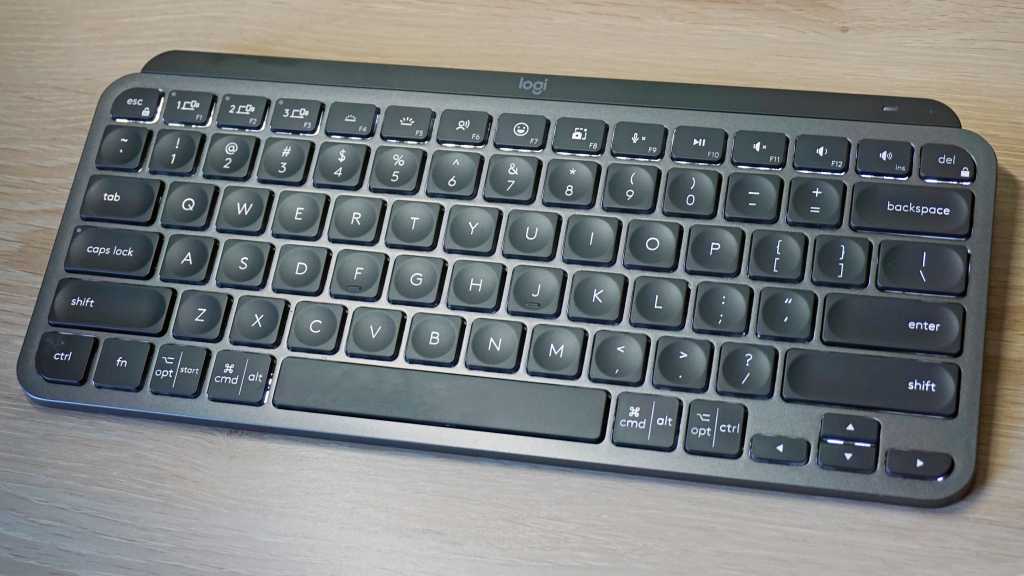 While its price tag is off-putting, the MX Keys Mini beats just about every other small, travel-friendly keyboard on the market thanks to its excellent typing experience, flexible wireless pairing, and software customization.

These days the premium keyboard market seems to be all about bombastic mechanical boards, the type that fill offices and homes with a tappity-tap rhythm that puts one in mind of Fred Astaire. Last year Logitech reminded us that keyboards don’t have to be big or loud with the MX Keys, a $100 board that keeps things thin and light but with a focus on quality and comfort. For those who want Logitech’s top-of-the line build without the intimidating width of a full-sized layout, the manufacturer now has the MX Keys Mini.

The MX Keys Mini, as the aphorism goes, does what it says on the box. It is essentially identical to the original MX Keys, with the 10-key and control cluster chopped off. The only modification of the layout is squishing the arrow jets into a laptop-style double-stack in the bottom-right corner, and a slightly narrowed function row to accommodate a Delete key. As a small, thin wireless keyboard, comparisons to Apple’s Magic Keyboard are unavoidable. But I’d describe the MX Keys as more of a detached version of a high-quality laptop keyboard, for desktop users who prefer something smaller and sleeker than the hordes of clicky mechanical models currently available. The scissor switches have a pleasant, if not particularly long, feel that won’t bother anyone in the next cubicle. Despite offering only one choice of keyboard angle (and a nearly flat one at that), I found that I was typing faster and more accurately than even on my beloved ThinkPad keyboards after a while.

The MX Keys Mini doesn’t try to do anything outlandish, like eye-searing RGB lighting or meticulously researched ergonomic contours. But what it sets out to do, it does almost perfectly. The slightly dished keys are easy to hit and center, the backlighting is bright and attractive, and the layout is so familiar that touch typists won’t even need to use it. Which is good, because turning off the lights boosts the battery from a week and a half to a quoted five months.

The exception is the function row. Intelligently, Logitech has set its default to some of the most commonly used tools for modern keyboards: media, volume, and a few welcome surprises like a microphone mute button and an emoji insert button. While the function row defaults to these tools, you can get your F1-F12 keys back with a quick tap of Fn+Esc.

If you don’t find the default tools particularly useful, you can reset the F4-F12 (and Delete) keys to other choices via the Logitech Options software. These choices aren’t unlimited, but you can set them to launch a custom application. Like most of Logitech’s recent high-end hardware, you can instantly swap between three paired devices with the F1, F2, and F3 buttons, and it’s compatible with the Synergy-like multi-device management tool Flow. The keyboard recharges via USB-C, but there’s no wired connection.

While it’s clearly meant for a desktop, even with its small size, the MX Keys Mini is also a surprisingly good companion for a tablet. I paired it with my iPad Mini where it served as a handy addition to my portable setup, especially with those quick-switch keys and the dual Windows/Mac key legends. It’s designed to work primarily over Bluetooth, and I never saw a hiccup, but you can also pair it with a proprietary USB Bolt receiver if the airwaves in your office are crowded.

The MX Keys Mini is a stylish and efficient little board for those who want the look and feel of a minimal 60% design, with a few more tricks up its sleeve. The only bummer is the price. Despite being nearly half the size of the original MX Keys design, Logitech is selling the Mini at exactly the same price, a hefty $100. (It hasn’t escaped our attention that this is also the same price as the standard Magic Keyboard from Apple.) It’s not as if we demand that keyboard size scale perfectly with price, but a $10 drop on that price tag seems more than reasonable. Frugal buyers should wait for a sale.

Even with its questionable value, the MX Keys Mini easily rises above the competition in this narrow category of skinny keyboards. Super-comfy keys, an intelligent and semi-customizable layout, and easily switching between multiple machines make it a joy to use, and an easy winner over the similar Magic Keyboard. We wish its smaller size came with a smaller price tag, but those who splurge won’t be disappointed.