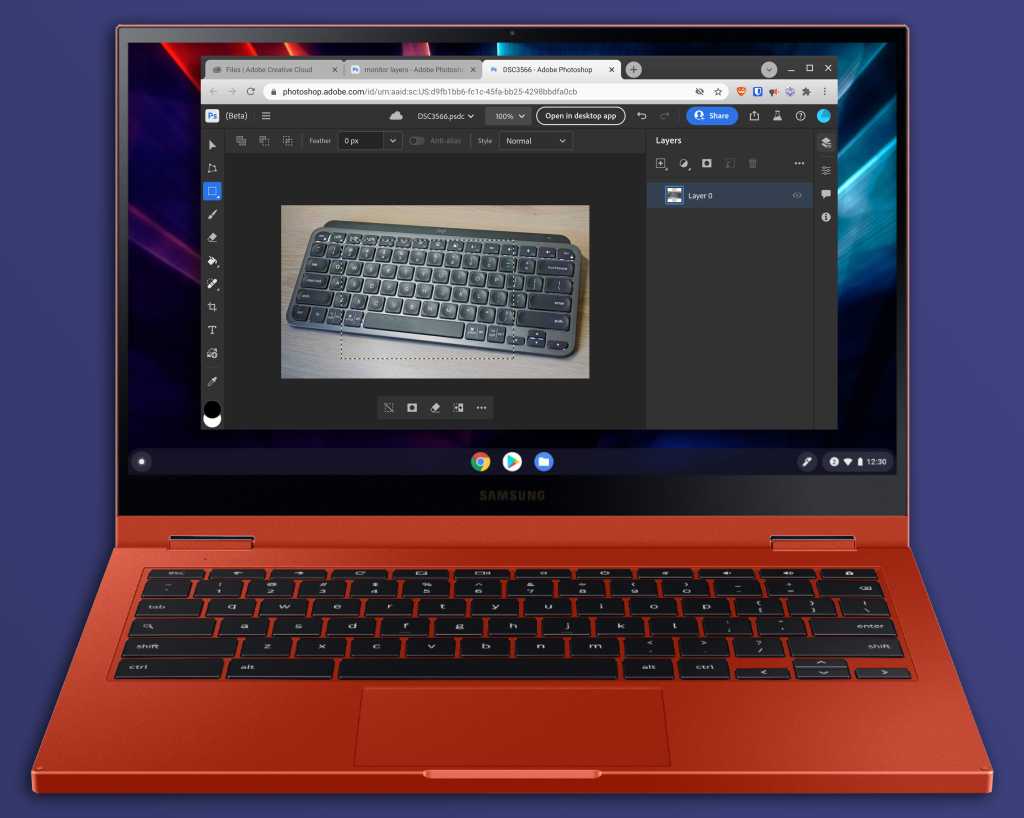 Users of Google’s Chrome OS have been waiting years — and years, and years, Adobe — for the industry-standard Photoshop image editing tool to become available to them. Today that wait is finally over. Sort of. Adobe announced that subscribers to its Creative Cloud service now have access to a web-based version of Photoshop, which offers a limited selection of tools for editing images and projects stored on Creative Cloud servers.

The system is available to subscribers today in an open beta, with the vector-based Illustrator also available in closed beta testing. The web-based version of Photoshop handles most of the basics of image editing, but power users might find it a bit limited, both in terms of its available tools and its compatibility with long-memorized keyboard commands. (Trying to activate the Free Transform tool with Ctrl-T, for example, merely brings up a new tab.) Adobe calls the tools available on the web “light editing.” While genuine Photoshop on the web is a potential game-changer, it’s nowhere near as powerful or as flexible as the full version on Windows, Mac, or even iPads.

Creative Cloud users need to upload editable files to Adobe’s cloud-based storage and convert the file before editing it, though the web tool can open basic images from local storage. Sending the files out for viewing and commenting is free, even if you’re sending to a user who is not a Creative Cloud subscriber.

Web-based alternatives to Photoshop like Photopea and Pixlr.com have been thriving in Adobe’s absence from this market. While an official option will certainly be competitive, free users are likely to remain with these services as long as Adobe charges a subscription fee. It currently costs a hefty $10 a month for the cheapest Creative Cloud plan that includes Photoshop.

In the same post, Adobe announced new products Creative Cloud Spaces and Creative Cloud Canvas. Spaces is a shared repository of files for teams, and Canvas is a sort of digital bulletin board for showing collections of images and documents in the same visual space.

Among other product enhancements, Adobe showed off come powerful new upgrades to the desktop version of Photoshop as part of the Adobe MAX demonstration. Object selection tools have become far more powerful, automatically selecting full objects even when there are multiple items in focus on the foreground. Users can also create object masks with a new quick menu tool. A “Landscape Mixer” tool in beta applies a collection of pre-configured filters to any image that can drastically alter the look of lighting and foliage with just one click. Similarly, the “Harmonization” beta tool (above) can match color and tone of backgrounds and foregrounds of any two layers without the need for manual tweaking.

Artists who work in multiple file types will be happy to learn of the new Illustrator Interlop feature. This allows you to copy vector objects from Illustrator into Photoshop while preserving the ability to edit at least some properties, like fill, stroke, blend mode, and opacity. Adobe announced a ton of more subtle upgrades to Photoshop as part of the MAX conference, which you can read about here.