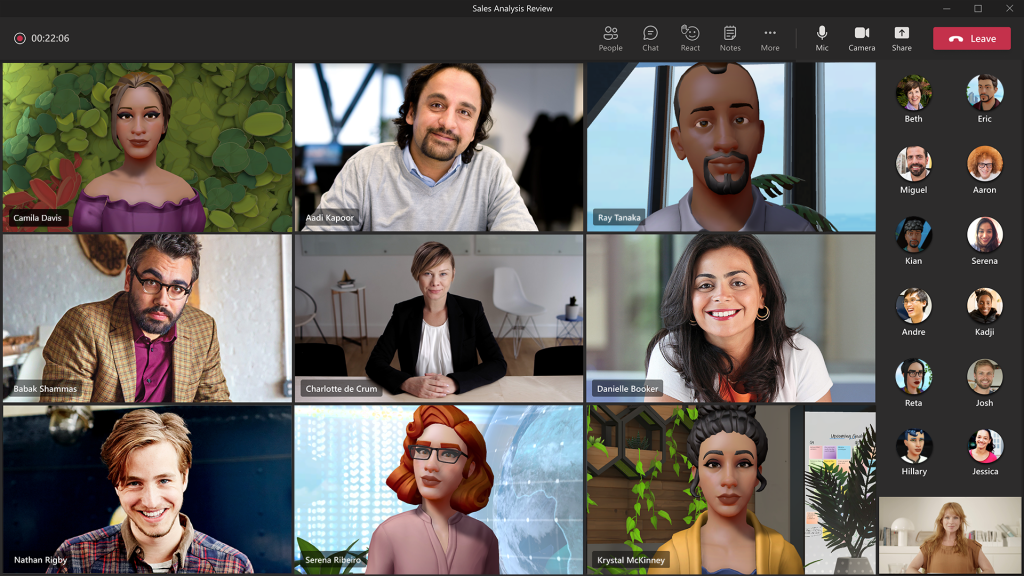 Microsoft has a metaverse, too, and it’s built on… Microsoft Teams?!

By designing its metaverse for online business and social experiences, Facebook (sorry, Meta) took aim at Microsoft’s own experiences for collaboration and hybrid work. Now, in the first half of 2022, Microsoft is promising that it will also offer a metaverse for online meetings via everything from smartphones to mixed-reality headsets. The technology? Mesh for Microsoft Teams (though calling the concept a metaverse is a bit of a stretch).

Microsoft’s own metaverse is a chance at redemption, of a sort. In 2017, Microsoft tried to roll out Windows Mixed Reality, both as part of the Windows 10 Creators Update — where it only allowed developers to access it — followed by a more formal unveiling as part of the Fall Creators Update. Mixed-reality headsets from HP, Dell, Lenovo, Asus, and Acer launched at prices up to $400 or so…then waited for Microsoft to allow anything but Microsoft Store apps, then add beta SteamVR support, while the Windows 10 April 2018 Update finally added full-fledged SteamVR-on-Mixed Reality support.

By that time, PCWorld’s review of Acer’s Windows Mixed Reality headset showed that they worked, though not as well as rival devices with external sensors — but by then, few really cared. Microsoft and its partners were passed by by Oculus, a brand being killed in favor of Meta in 2022. Microsoft itself moved towards augmented reality with its HoloLens 2, which at its Microsoft Ignite conference this week is being characterized as a mixed-reality device. Microsoft is also taking 15 percent off the price through Nov. 15, supposedly to spur developers to sign on.

What is Microsoft’s metaverse?

Microsoft’s own research still shows that about two-thirds of business users want to work from home and want more social interactions, and it believes that the metaverse might be the intersection of both trends. Microsoft’s vision of VR productivity involved a “cliff house,” a virtual space where you could teleport from room to room and pin documents and video streams to virtual walls.

That’s not the case for Mesh for Microsoft Teams, which is using an exceedingly simple approach toward transitioning between the physical world and the virtual one: imagine a Teams call, with a row of faces. Now imagine some of those faces as avatars, rather than actual people. That, for now, is all Microsoft’s metaverse is — sort of a midway point between turning your webcam on or off, while not allowing people to see you working in your pajamas.

“Sometimes I just want to be able to sit in my chair downstairs and have my heat pad on, but maybe it’s not that appropriate,” said Katie Kelly, a principal project manager at Microsoft working on Mesh for Teams, who Microsoft cited as part of a blog post explaining its metaverse concept. “I’d love to be able to turn on my avatar. I’m still present and engaged, and the people that are there feel like I’m present and engaged.”

So far, Microsoft’s metaverse concept feels preliminary and reactive, giving Microsoft quite a bit of wiggle room to roll it out as “a preview” in “the first half of 2022”.

“To start, we will take audio cues so as you talk your face will animate,” Kelly said, according to Microsoft. “You’ll also have animations that bring additional expressivity to the avatars. Your hands will move. There will be a feeling of presence even though it’s as simple as being able to take your audio and manifest that as facial expressions. That’s the first release. The ambition is to closely follow that with Microsoft’s plethora of AI technologies so that we can use the camera to insinuate where your mouth is and mimic your head and facial movements.”

Over time, as sensors improve, the way in which Mesh for Microsoft Teams will supposedly improve, so your avatar will become more responsive. Microsoft has also spent several years building out more traditional virtual spaces with Accenture, which supposedly uses it for everything from onboarding employees to virtual retreats, even with virtual monorails whooshing attendees from event to event.

Given Microsoft’s jilted love affair with now discontinued apps like Story Remix, Mixed Reality Viewer, and so on, you have have plenty of reasons to doubt that Microsoft can actually deliver on its promises. Still, being able to chat with a coworkers “dressed” as dragons, or bunnies, or simply as a thought bubble seems somewhat reasonable two days after Halloween, in a world where some employees haven’t shaken hands with one another in years.