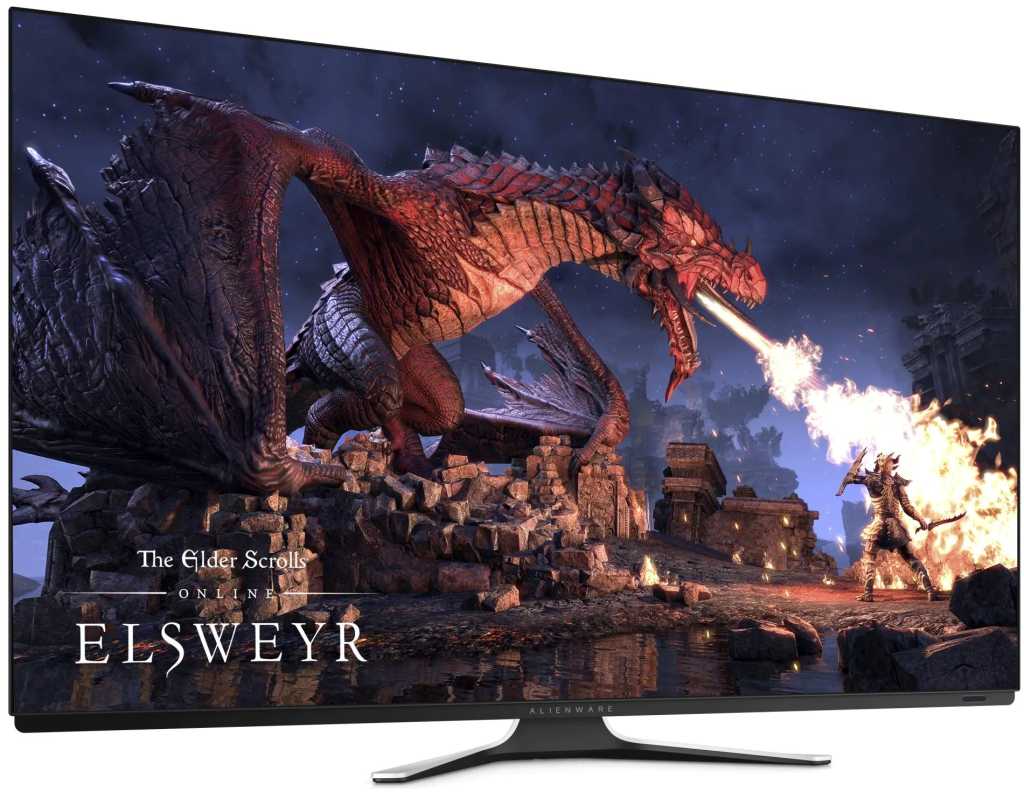 If you want to enjoy OLED on a PC, however, your options are limited. A small handful of laptops, like the Dell XPS 13 and Samsung Galaxy Book, offer an OLED display. A few OLED monitors exist, but most are massive screens designed for use in a living room, not on a desk.

Why is this true? And will it change any time soon?

Desktop monitors are popular among PC enthusiasts but, compared to other markets for displays, they’re a small market with small margins. As a result, companies that produce OLED panels place a focus on panels for markets with more volume. Production that targets other devices, like televisions, can be used to produce a monitor – but the results might not be what you expect.

“OLEDs can be produced cost effectively in smartphones and have come a long way in TVs and notebooks,” says Ross Young, CEO of Display Supply Chain Consultants. “But the technology for monitors is not there yet. There will be some monitors promoted in 2022 that use TV fabs. However, those monitors will not be as high in resolution as LCD monitors.”

It is possible to produce 27-inch or 32-inch 4K OLED panel, says Young, but the production is low volume and “not cost optimized.”  That’s why the few desktop-sized OLED monitors to hit the market in the past five years were extraordinarily expensive.

The high price can be difficult to justify, especially to mainstream shoppers unaware of OLED’s benefits. “Consumers are generally very approving of OLED displays,” says Anshel Sag, Principal Analyst at Moor Insights & Strategy, “but it’s one of those technologies that you have to ‘see’ to believe, and that’s why you don’t quite get enough people switching over to it.”

There is light at the end of the tunnel – but the tunnel may be long. Young thinks PC enthusiasts will need to wait until 2024 and beyond, when the “next generation” of OLED fabs come online, before OLED is cost-effective for monitors. That doesn’t mean monitors won’t advance, however. High-end monitors will move to embrace Mini-LED technology, which should prove more affordable in the short term.

Laptop shoppers won’t have to wait for more OLED options

2021 was a good year for OLED laptops. Asus, Dell, HP, and Samsung now offer several laptops with an OLED display. They’ve performed well in our testing, with sufficient brightness for day-to-day use, an excellent contrast ratio, and vibrant color performance.

Thank Samsung. Young says the company’s display division, Samsung Display, made a commitment to rapidly grow the market from 1.1 million panels in 2020 to 5.4 million through 2021. I saw this commitment first-hand. I’ve handled a half-dozen new laptops with a Samsung OLED display this year, some of which were, in an unusual move, sent to me directly from Samsung Display. The company wants the world to know its serious about OLED in laptops.

OLED’s popularity should only increase as improvements reduce power consumption. “There are a number of near-term advances expected in reducing power […]” says Young. “These developments combined could reduce OLEDs power by more than 50%.” Future OLED manufacturing will also reduce costs to make OLED more competitive with LCDs in mid-range laptops.

Burn-in is a problem with no easy solution

Linus Tech Tips published a video in October of 2020 headlined “Every other monitor is dead to me.” It was Linus Sebastian’s love letter to the 48-inch LG CX OLED television. Nine months later, Linus was back with a sorta-kinda retraction. He was still in love with the LG CX OLED, but the burn-in was real.

“One solution to this issue is tandem structures which could double brightness and increase efficiency and extend the lifetime of OLED devices,” says Young. Manufacturers also continue to refine compensation features, like pixel orbiting, to decrease the chance of burn-in over time. Still, it’s unclear when (or if) future OLED innovations will entirely resolve the burn-in problem.

It doesn’t help that desktop monitors are a worst-case stress test for OLED burn-in. Windows 11 and MacOS are designed with large static elements, like the Windows taskbar and MacOS dock, that rarely move or disappear even as applications are opened and closed. Modern habits contribute, too. Two decades of LCD monitor dominance have taught owners it’s ok to leave a monitor on, and without a screen saver, when it’s not in use.

“It would be nice if Microsoft were to solve this problem in Windows 11,” says Sag, “especially since they finally fixed the HDR problems Windows 10 had.” However, Microsoft hasn’t announced a plan to mitigate OLED burn-in issues. I don’t find that surprising. Microsoft didn’t move aggressively to support HDR until HDR monitors reached the mainstream market. I think the same will prove true of OLED.

Young and Sag’s insights are not good news for PC enthusiasts hoping to replicate the experience of using an LG CX OLED on a monitor practical for a typical desk. A few 4K OLED monitors, like the LG UltraFine 32EP950-B, may trickle into stores over the next few years. However, pricing will remain high and availability will be limited. It’s also unclear when 4K OLED monitors will receive expected gaming-centric features including a high refresh rate or black frame insertion.

The situation will improve as new OLED production becomes available through 2024, increasing capacity and lowering prices to a point that’s more appealing for desktop monitors. Laptops will move ahead of desktop monitors, though it’ll likely be years before they have a shot at matching the volume of LCDs.

That’s bad news if you want an OLED now, but there is a bright side. PC enthusiasts shopping for a premium monitor today can buy without worry that a tsunami of better OLED monitors will make it obsolete next year.