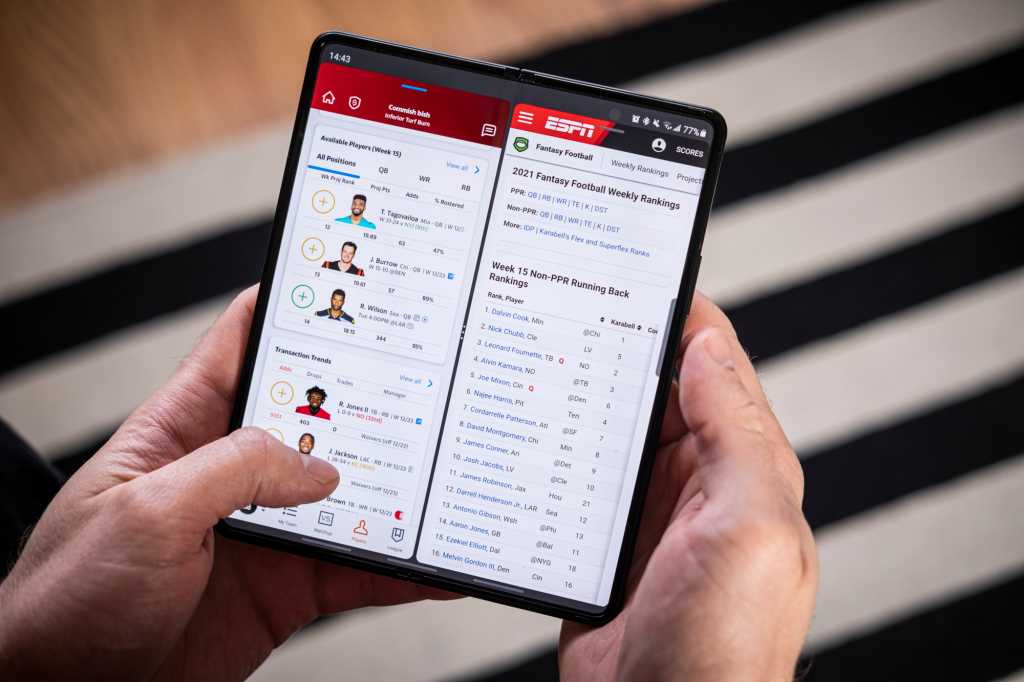 The radical Samsung Galaxy Z Fold3 offers new ways to use a smartphone, and it’s been exciting trying one out for the first time. With a 6.2-inch AMOLED screen on the outside and a tablet-sized 7.6-inch display on the inside, it’s caused me to rethink how I use my phone. While I’ve found several unique uses for its folding design, one of the biggest game changers for me was one I hadn’t thought of—until it was time to manage my fantasy football team.

The Galaxy Z Fold3 features a dead-simple split-screen mode with more multitasking functionality than what’s built into Android itself. With the phone closed it defaults to the typical top/bottom split on the outer screen, but opening the phone reveals many more possibilities. I can still stack apps like usual, but I found myself opening apps side-by-side much more often. In this configuration, each app takes up half of the big interior AMOLED screen—each essentially in the size of a whole normal phone’s screen. It’s similar to using a dual monitor setup like I have on my desktop PC, and it’s truly a revelation in daily use.

I’ve experimented with a number of combos during my time with the phone and found some uses really level up my phone game, rivaling what can be done on a tablet. There are productivity uses, like having Slack open on one side to keep track of a conversation I’m having while searching for the answer to a problem. As a video producer I watch a lot of YouTube through out my day, so having a video playing above something else is an even better example. There’s a whole world of possible uses, but the main one I’m here to talk about involves real business: Fantasy football!

As the commissioner of an employee-based fantasy football league here at PCWorld’s parent company, I take my job very seriously. I’ll check updates to my roster multiple times each day, and read ranking articles for the latest info. Having the Yahoo Fantasy Football app open on the left side of the unfolded screen, with Google Chrome open on the right, saves me the hassle of constantly switching back and forth between the two. Add the Galaxy Z Fold3’s ability to save that window layout configuration in the quick launch bar and I feel like I’m cheating.

The time I use this configuration the most is on Tuesdays, leading up to our weekly waiver wire claims. I’m able to have ESPN’s weekly rankings up while also perusing the available players in the Yahoo app, and it saves a ton time and energy. I also lean heavily on the setup during the early morning on gamedays, when I compare my active players on FantasyPro’s comparison page. Like I mentioned, the Galaxy Z Fold3 feels like having a dual monitor setup on my phone, and it affords me the ability to perform these data-intensive tasks away from a computer.

Having these tools available in my pocket is a fantasy football game changer, and while I’m sure Samsung didn’t account for this particular use case, I can tell you it’s what sold me on the idea of a folding phone. A quick look at how my team is doing on gameday? Just check the outer screen. More complex lineup research and placement? Unfold the phone and get working. While the Z Fold3 is far from perfect, and some people might not have use cases like this, it really has opened my eyes to the ‘folding’ future.

Unfortunately, all these tools haven’t saved my team from suffering through an injury riddled season that has kept me in last place, but I never said it made me an improved fantasy football manager. Just a more efficient one.