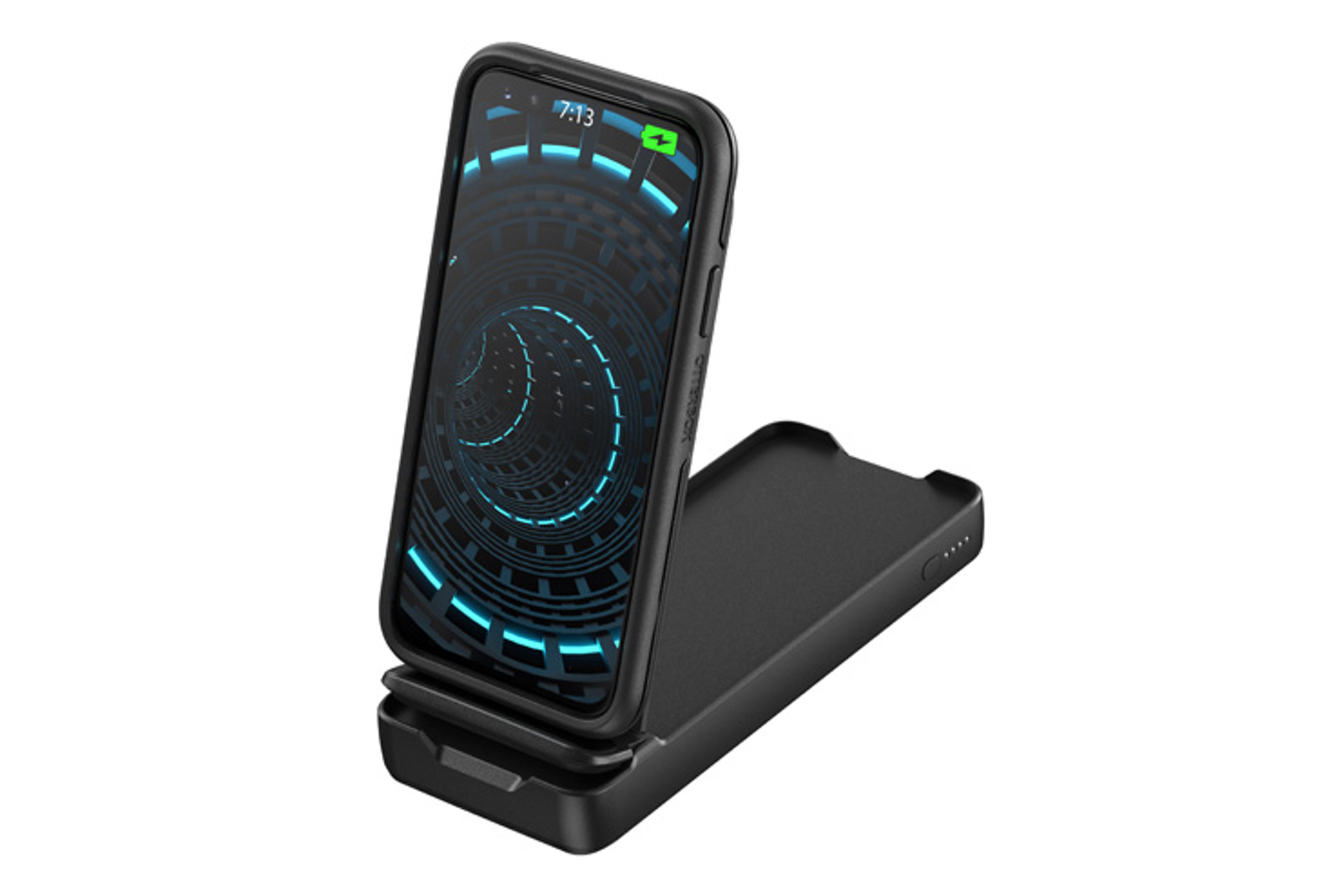 Otterbox
At a glance

If you want a different style of power bank that gives you multiple charging options, this is worth consideration. Otherwise there are better packs for less money available.

At first glance, it looks like a typical battery pack. The black housing has two ports on the front—one USB-A, the other USB-C—and a power button with capacity-indicator LED lights on the side. But the top of the battery pack is where things get weird. In a good way.

It’s clear by looking at the pack that there’s a wireless charging pad thanks to the textured surface and an identifiable charging area, outlined with gold, in the center. But instead of just lying your phone flat on the battery pack, the top lifts up to create a wireless charging stand, complete with a little ledge on which to rest your phone.

The hinge for the stand is strong, allowing you to adjust the angle of the stand, ensuring you can watch a video, talk on the phone, or even game while your phone is charging.

I tested the wireless charging capabilities of Otterbox Folding Wireless Power Bank with an iPhone 13 Pro Max and a Pixel 5. Otterbox advertises wireless charging of up to 10W. To test it, I drained both phones until they powered off due to running out of battery, and then placed them on the charger for an hour. I’d turn on and unlock both devices after roughly four minutes of charge time, and then after an hour had expired I’d check their respective charge levels.

For the iPhone 13 Pro Max, the pack averaged a 42 percent charge level after an hour. For the Pixel 5, the average battery level was 28 percent. I’m confident the reason the Pixel 5 charged slower is that the phone isn’t that tall and the charging pads didn’t properly line up when using the pack with the stand erect.

As far as wired charging is concerned, the Otterbox Folding Wireless Power Bank offers up to 18W charging through either port. You can charge the pack through the USB-C at up to 15W. Using an AVHzY USB Power Meter connected to a computer, I measured both the time it took to charge the pack at maximum charging speed, and how much power the pack expelled out of its total capacity of 10,000mAh or 37Wh.

It took 2 hours and 43 minutes to charge the pack at 15W, and I verified that it supports passthrough powering. In other words, you can charge the pack while also charging your phone via a wired or wireless connection.

When it comes to efficiency, the power bank didn’t perform as well as I had hoped. Out of a potential 37Wh of capacity, the pack stopped outputting power after 27.7191Wh. That’s an efficiency score of 74.92 percent, the third-lowest out of all battery packs I’ve tested. The average rating among all tested packs is 83.34 percent.

When connecting a device to either USB port, the pack starts charging automatically. You don’t have to turn it on. Turning on the wireless charging pad was trickier, however. By the end of my testing, I figured out I had to press the power button once and then wait a few seconds before the wireless charger would turn on and start providing power to the device.

I think the Otterbox Folding Wireless Power Bank makes sense for those who want a unique battery pack that offers wireless charging with a twist. That said, $60 is a high price for a a 10,000mAh battery pack that isn’t very efficient, so know that you’re paying a premium for the Otterbox name and the wireless charging stand. There are much more affordable and capable options available.