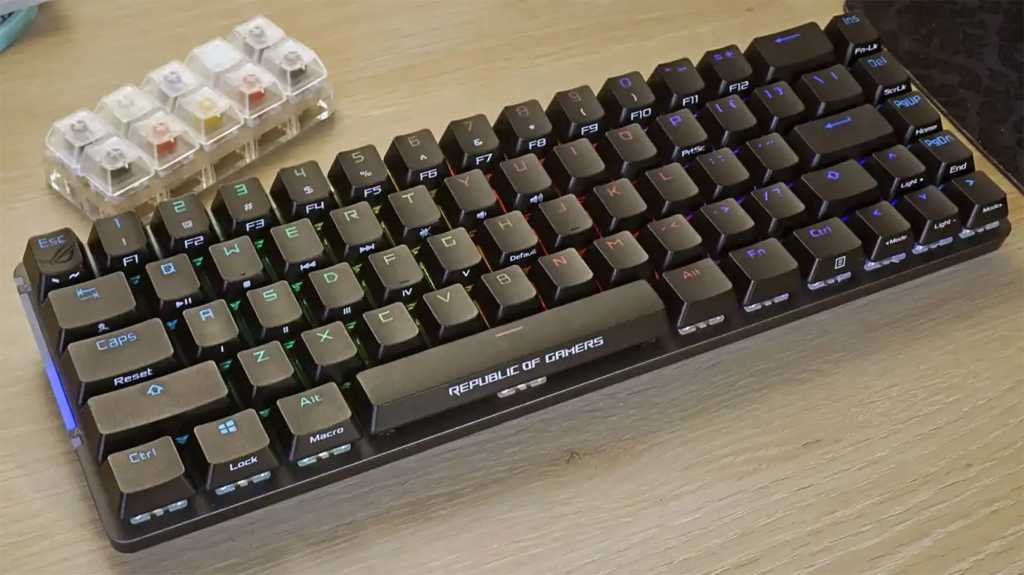 Maybe you’re not in the market for a new laptop or desktop PC, or maybe you’re just put off by the insane prices of GPU upgrades. But you can give your fingers an early holiday gift by upgrading your keyboard (or, fine, I guess buying one for a friend or family member). Keyboards both budget and premium are scattered throughout Black Friday for those on the hunt.

We’ve found a cornucopia of keyboards that’ll fit into any desktop setup — some of them will even fit in a backpack for those on-the-go writing sessions. We’ll update this list throughout the week and weekend when we find even more deals.

This basic board is a great place to start if you’re new to mechanical keyboards and you want to see what the fuss is all about. It comes with a solid body, flashy lights, and a choice of blue (loud and clicky) or red (smooth and fast) key switches.

One of the few non-mechanical keyboards that’s really worth your time, this stand-alone version of the Surface keyboard layout is excellent if you’re low on desk space or you’re looking for a companion for your tablet. It comes in black and white color options.

A favorite among small keyboard enthusiasts, the Anne Pro 2 crams in a lot of features for a small price, like Bluetooth, a programmable layout, a wide selection of switch choices, and high-quality PBT keycaps. Now you can get all of that with a much lower price.

Another choice for a small, portable, wireless keyboard, this one is a bit more sleek thanks to a compact body and low-profile clicky switches. You’ll have to do a little legwork to get the deal because of the mail-in rebate.

At $170, this Razer bundle with a non-mechanical (but very “clicky”) keyboard, wired mouse, wired communication headset, and massive mousepad was already a pretty decent deal. At just $79, it’s an absolute steal for anyone setting up a new gaming PC.

This miniature keyboard is hiding a secret: Razer’s most advanced switches, which break beams of light to register keystrokes. It’s wired and somewhat limited in terms of layout, but if you love that 60% look and flashy RGB lighting, it might be for you.

A slightly more expensive alternative to the Razer bundle above, this one doesn’t include the headset. But the K60 is a solid keyboard with premium Cherry-branded switches, as opposed to the pseudo-mechanical board in the Walmart bundle.

This Corsair board is similar to the one above, with all the trimmings: extra media controls including a volume wheel, a detachable wrist rest, super-speedy Cherry MX Silver switches, and even an extra USB port that lets you plug in extra gadgets easily.

This oversized Roccat board is for those who want their keyboard to be the centerpiece of their desk. With an eye-catching brushed metal body, a retro volume knob, and low-profile keycaps that show off every possible photon of RGB lighting, it’s a keyboard that would look at home in the middle of a DJ setup.

One of Razer’s most feature-packed boards, this design includes a ton of bells and whistles: USB and Bluetooth wireless, media controls and a volume dial, an included wrist rest, and super-blazing disco lighting (which can sync with other smart lights).

This compact TKL (that’s tenkeyless, as in no numbers on the right) board is great for gamers who are looking to cover the essentials. And by “essentials,” I mean sparkly lights and a detachable cushy wrist rest.
Currently unavailable.

These days, most keyboard deals are firmly focused on the popular mechanical category, especially for gamers and work-from-home types. A few premium models of non-mechanical keyboards are still available, but in general those are low-quality, high-volume designs that aren’t really worth your consideration.

That said, the popularity of mechanical keyboards means there are plenty of cheap, low-quality boards crowding digital shelves, too. These often get steeply discounted just as a means of clearing them out, so if you’re wary of a lemon, it’s best to stick to more established brands. Also, note that even reputable stores have a bad habit of over-inflating the initial retail price of items on sale, especially around Black Friday. So don’t take the level of discount as a necessary indication of an item’s worthiness.

For wireless keyboards, you have a couple of options: USB-based dongles, which typically use 2.4GHz or 5GHz wireless signals ideal for gaming, or Bluetooth, which requires no extra hardware but has a little bit of noticeable lag. Dongles are preferable for gamers and desktop setups, while Bluetooth is a choice for anyone on-the-go or who wants to connect to multiple machines quickly.

Where can you find Black Friday laptop deals?