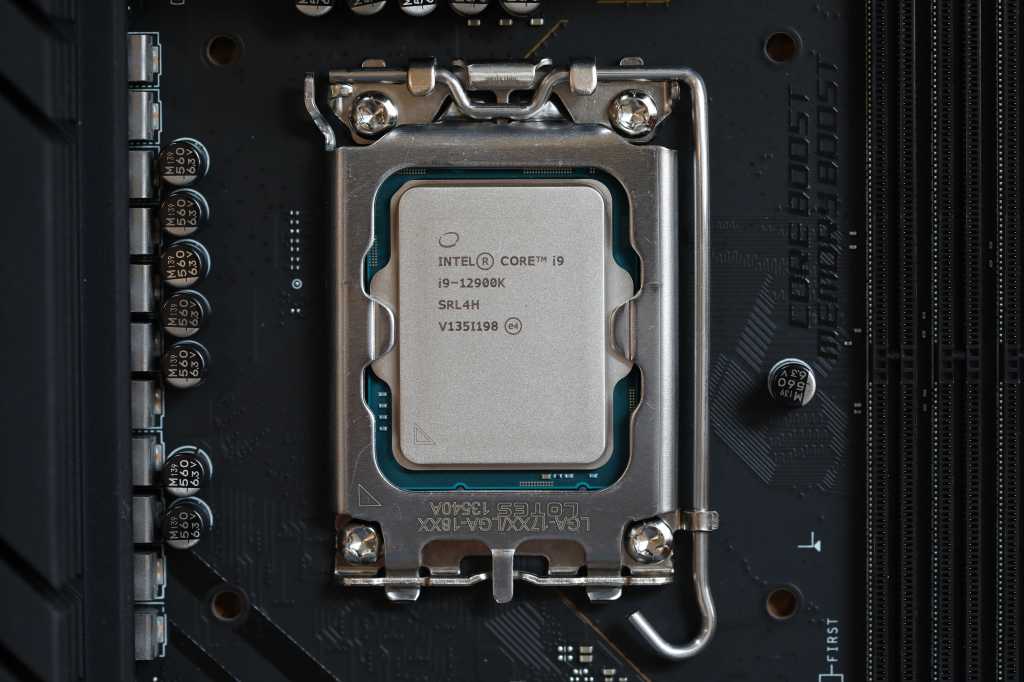 The Internet narrative for Intel’s stupidly fast 12th-gen Alder Lake CPUs has been set: They’re stupidly power hungry too. While that can be true, especially under heavy all-core loads, the actual truth is far more nuanced than the Twitter hot takes you’ve seen jammed into 280 characters.

We briefly covered some of the nuances around power consumption in our reviews of the 12th-gen Core i9-12900K and the 12th-gen Core i5-12600K. But despite those key nuances, the Internet has dismissed Intel’s new CPUs as simply being “too power hungry” when compared to Ryzen.

To help shed a little more light on what the reality is, we’ve decided to publish additional detailed test results. The data was generated during our review of both CPUs, where we actively captured the total power consumed of both the Intel 12th-gen system and the AMD Ryzen 5000 system. Both PCs had identical 80 Plus Gold power supplies, GPUs, SSDs, closed-loop liquid coolers running fixed RPM fans, and the same amount of memory. All motherboard LEDs and OLED displays were disabled as well. To get the most performance out of the Ryzen 5000, we ran it at DDR4/3600, which does consume slightly more power than when running stock speeds. We also ran the Intel system on its XMP profile mode as well.

We captured total system power, which does differ from reviewers who may have looked at reported CPU package power using an OS-based system monitor, or others who captured power consumption on the 12 volt rail of the EPS12V power connectors. There is no real right or wrong answer about which method is best. Recording reported wattage with a utility isolates the CPU while ours is certainly more practical since you pay for how much total system power your desktop PC consumes—not just how much the CPU uses.

We also think our approach is far more useful to give consumers insight into just how little power the CPU consumes power during gaming. While most of the reviews we’ve seen present peak usage under an all-core load, we recorded the power consumption of both PCs simultaneously over an entire run with a pair of logging watt meters. This gives you a a larger window into just how power is really being consumed.

Let’s start with the high-end chips.

This first result is really everything you need to know—if you don’t want the full picture. For the test, we run Maxon’s Cinebench R20 using all cores or threads, and then we run the same test using a single core or thread. Both of these were recorded simultaneously. You can see the Core i9-12900K in red and the Ryzen 9 5950X in purple. Under an all core load, you can see the Core i9-12900K spiking to just over 320 watts. The Ryzen 9 5950X, however, is using just over 220 watts.

We won’t get into performance results in this article, but in our 12900K review you can see that the Core i9 is just slightly faster (if not tied) with the Ryzen 9 5950X in raw score. The pat on the back for Ryzen 9 is that it offers the same performance at roughly a third less power consumption. But once we move into single-threaded performance, the roles are reversed and we see the Core i9 now uses about 20 percent less power than the Ryzen 9. In single-threaded performance the 12th-gen Core i9 outperforms the Ryzen 9 by about 16 percent, which you can see manifest itself below where the Core i9 is using less power and also finishing the task at hand faster.

The problem with painting the entire 12th-gen chip with the broad brush of an all-core or single-core load is reality isn’t like that. For the next results, we captured both systems running Puget System’s PugetBench Premiere Pro benchmark. Most assume Adobe Premiere Pro will hammer all of the CPU all of the time, but it’s really a mix of different CPU and different GPU tasks at work. It’s actually a little surprising, but instead of Ryzen 9 easily winning from its better all-core power efficiency, it’s pretty much dead even. In performance, the Core i9 actually outscores the Ryzen 9 by 40 percent when the integrated graphics (IGP) are enabled and by 6 percent when it’s off. For this test, we show power consumption when the IGP is off. Considering that Premiere is probably one of the more intensive applications a regular nerd will use, it tells us that those who insist the 12th-gen Core i9-12900K will be a “power hog” are vastly overstating the situation.

One of the other intensive tasks many people do on a computer is run Adobe’s Lightroom Classic. We again lean on PugetBench, which combines a mix of lightly threaded tasks (which benefit from higher boost clocks) with heavy use of all of the CPU cores during photo exports. The Core i9-12900K bested the Ryzen 9 5950X’s performance to the tune of about 14 percent overall in the test.

On the power consumption side, it very much depends on what’s going on. On the left side of the test where PugetBench is mostly running through its editing of photos, the Core i9 is actually somewhat more efficient. On the right side where we see the large spikes in power consumption for the Core i9, it’s Lightroom running an export, where the Core i9 does indeed levels similar to what we saw in Cinebench R20. But can you really say the Core i9 is a “power hog” if a photographer sits down and is editing photos for four hours before doing an export that lasts maybe 20 minutes? The answer, of course, depends on what you do mostly. If exports are where you live, then the Ryzen 9 will indeed be more power efficient but most of the time it’s really no big deal and maybe that slightly crisper feeling of a Core i9 is worth it.

Our last Adobe test uses UL’s Procyon photo editing test. This benchmark uses Adobe Photoshop and Lightroom Classic to measure performance of a system. The first half runs Photoshop, where having a very fast boost clock matters. It’s largely lightly threaded too. We can often see Ryzen 9 consuming more power than the Core i9 throughout the test. Surprisingly, in the right side of the graphic, where Lightroom Classic is running and using more cores than Photoshop, the Core i9 still often consumes less power than the Ryzen 9. So again, it’s certainly not a power hog here.

Moving from application power consumption to gaming power consumption, let’s start with Horizon Zero Dawn. We set the graphics to Ultimate quality and run its built-in benchmark mode at 1920 x 1080 resolution. The winner? Let’s call it a tie (although technically the Core i9-12900K uses slightly less power.) Why? The vast majority of games are GPU-intensive, and these systems are pulling in excess of 500 watts while running the benchmark mode.

We also ran the game Metro Exodus set to Ultra quality at 1080p. The benchmark mode loops three times which you can see here as dips in power consumption between runs. Like Horizon Zero Dawn, the Core i9-12900K system uses slightly less power than the Ryzen 9 system but you’d be OK to say that it is immaterial. What’s really important though is this once again counters the hysterical Internet narrative that a 12th-gen Core i9 will simply use twice the amount of power of Ryzen 9 5950X. It is simply not true for this game. In fact, sadly, it’s like that for most games because most games don’t use enough CPU cores or threads to push the Core i9 to the point where it will use more power.

So far we’ve covered Intel’s 16-core Core i9-12900K, which can be argued is the better CPU for most people’s needs. And yes, you could also argue that the AMD 16-core Ryzen 9 5950X is the better CPU for certain tasks. It just depends on what you do and where you need your performance. Intel’s 10-core Core i5-12600K, however, brutalizes the AMD 6-core Ryzen 5 5600X in just about everything you can think of, to the point where it’s hard to recommend the Ryzen chip over the Core i5.

The Core i5-12600K does potentially use more power than its rival, but context is everything. For example, in the chart below you can see both systems running Handbrake to convert a 4K video using the H.265 codec. The Core i5 mostly sits at 220 watts through the run versus the 165 watt power consumption of the Ryzen 5. That’s about 30 percent more power used for the Core i5 versus the Ryzen 5. That’s only looking at the peak performance though. If you look at that red line, Core i5 uses more power but finishes the task with a significant time savings and begins to idle while the Ryzen 5 continues to burn power—albeit lower—to finish the task. In the end, you could say it’s pretty even in total power draw.

In Premiere Pro using PugetBench again, we’d say the Core i5 does use slightly more power than the Ryzen 5, but it’s close enough that it shouldn’t be a deal breaker to most—especially considering how much better the Core i5-12600K does performance-wise. Intel’s chip delivers a 13 percent better score in PugetBench with its IGP off (which is how we measured power here), and a phenomenal 64 percent faster with its IGP enabled. With its IGP on and Intel’s Quick Sync enabled, the Core i5 is actually faster than the 16-core Ryzen 9 5950X in PugetBench. Wow.

Our last result pits the Core i5-12600K against the Ryzen 5 5600X in Maxon’s newest Cinebench R23 test. Unlike the previous version of Cinebench, which ran one time to compute a score, R23 defaults to a 10-minute “stress test” mode, where it repeats the rendering of a frame until 10 minutes is hit and then continues to finish that final render. Yes indeed, the Core i5-12600K is a “power hog” when you consider that it is using 240 watts while the Ryzen 5 is using 170 watts—or 41 percent more power. But what that doesn’t tell you is how much faster that Core i5 is, which you can see below in the chart. Every single down tick represents a completed rendered frame before Cinebench R23 begins another.

In the roughly 10-minute run, the Core i5-12600K manages to render 14 frames in almost the same time the Ryzen 5 can only render 9 frames. That’s a huge time savings under what is arguably one of the worst case scenarios for an Alder Lake CPU.

Put down your pitchforks

In the end, you can certainly say that Ryzen can be a more power-efficient CPU under the heaviest of loads than rival Intel 12-gen chips—that’s of no doubt. But as you can see, there’s a lot more to the story. Given Alder Lake’s generally better idle power states, ability to finish tasks faster and the simple fact that the vast majority of games and “heavy” content creation applications such as Photoshop, Premiere, and Lightroom Classic don’t use all of the threads and cores available, it’s dead wrong to declare Alder Lake a huge, power hungry CPU. It clearly isn’t most of the time. And even when it is hammering the power, it’s often much faster than Ryzen.