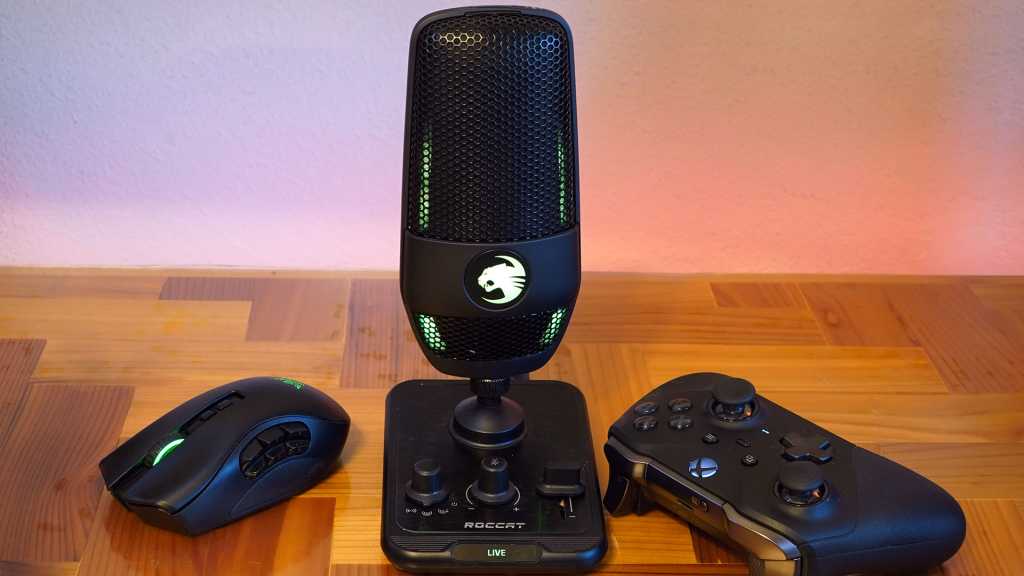 The Roccat Torch is a fun, flashy microphone for gamers and streamers, or anyone who likes some desktop bling. Don’t expect incredible audio quality and you won’t be disappointed.

Do you need a microphone designed specifically for gamers if you’re using it for video games? No, of course not (unless you’re looking for a USB microphone for streaming, that is). All-around great choices like the Blue Yeti X are just as good for gaming as they are for podcasting or meetings. But do you want a USB microphone designed with gamers in mind? If the answer is yes, Roccat’s Torch might be right up your alley.

The Torch can’t compete with studio-quality microphones, like the aforementioned Yeti. But it isn’t trying to: it’s trying to be a cool, fun design that works well for people who know more about K/D ratios than they do about polar patterns. And it succeeds.

Upon pulling the Torch out of the box, you’ll see that it’s quite visually distinct from almost any other dedicated USB mic. The main housing rests on a wide, flat base, with a control area reminiscent of a mini DJ deck. You have instant and easily-reachable controls for the gain, monitor volume, and pattern, which also doubles as a power switch.

Tap the monitor volume knob in and you mute the mic. (The knob works for Windows volume control, but slightly confusingly, not for Windows mute.) Alternately, and silently, you can wave your hand above the head for a “touchless” mute via the infrared sensor. I found this kind of awkward, and while it worked reliably, I wasn’t ready to trust it over an old-fashioned switch.

Around the back of the base you’ll find a headphone jack, a sensitivity switch for the mute gesture sensor, and a button that adjusts the brightness of the RGB LEDs (because of course there are RGB LEDs). In addition to the Roccat logo and the “mute” or “live” action button, two vertical strips on the head light up in reaction to the gain slider. It’s a neat effect, especially since the color corresponds to the pattern setting. It’s also as much eye candy as you’re getting, as these RGBs aren’t addressable via software.

There’s one awkward bit of the design: an extra, and to my mind unnecessary, cable. In order for the base unit to connect to the microphone itself you’ll have to plug a USB-C-to-C cable between the two parts. On its base this looks kind of like that little fleshy tube on the back of the Pokemon MewTwo’s neck. It’s awkward, a real downer in this otherwise clean look.

The advantage is that you can take the microphone off of the base and use it with a boom arm, like any studio mic. The package includes a much longer USB-C-to-C cable to facilitate this, with the base controls sitting on your desk and the mic on its boom, streamer style. While I appreciate the option, I’d prefer a cleaner, all-in-one design: I don’t think anyone choosing the Torch over a more standard USB microphone will actually want to use it with a boom arm.

The Torch comes with a dual condenser design and a built-in pop filter with support for 24-bit recording. On paper that means it should meet or beat just about any microphone out there. In practice, I found it serviceable, but my recordings were a little flat, and not picking up some of the more subtle sounds of my voice or interactions.

In terms of pure audio quality, the Torch is far better than any mic you’re going to find on a headset. But it’s not about to replace the years-old Yeti I use anytime audio quality is essential.

But as I said previously, that’s not really what the design is about. It’s a mic that sounds fine, looks great, and includes some fun direct controls that are easy to get used to. Roccat offers standard and stereo recording, and even a “whisper” mode, with automatic adjustments if you’re gaming when your housemates (or parents) don’t want to be an extended part of your Discord chat. It’s a nice touch.

While it’s not going to unseat more established players in the field, Roccat’s game-focused Torch is a winner on aesthetics, controls, and just plain fun. I could do without the IR mute option or the weird extra cable, but it gets an easy recommendation if you want a mic that works great for gaming or streaming and also looks really slick next to your RGB keyboard.