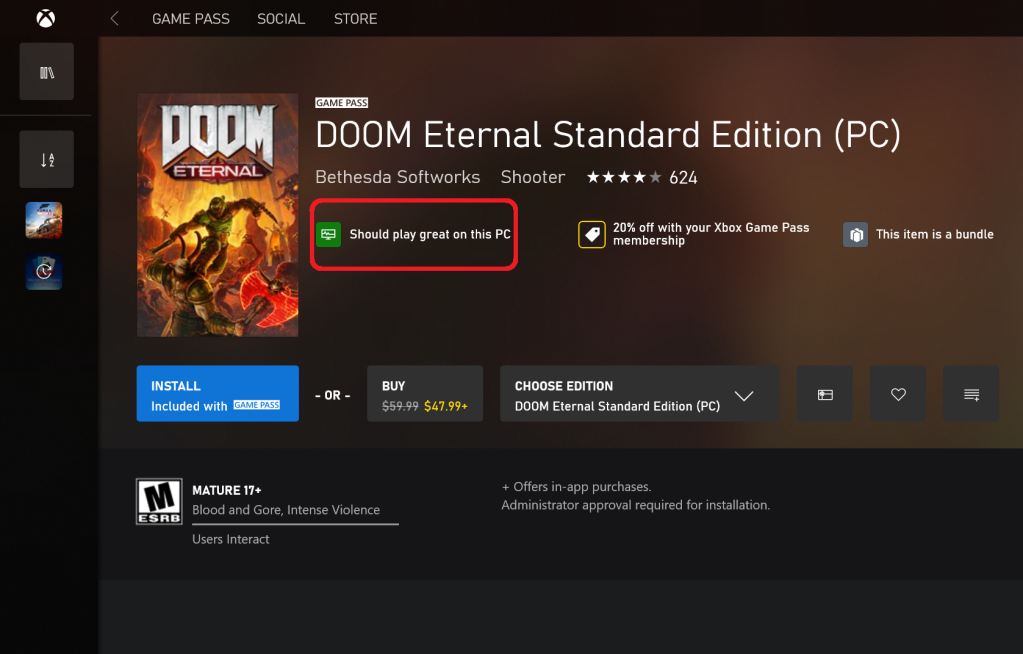 Microsoft is testing a feature for the Xbox app for the PC that evaluates how a game will play on a given PC. It has the potential to eliminate confusion about whether to even download a game or not.

The new feature isn’t available to all PCs. You’ll need to be a member of the Xbox Insider Hub on the PC, then download the Xbox app preview that membership makes available to users. You won’t need to download and install a Windows Insider preview of Windows 10/11 to test out the new feature.

The new feature is very basic: There’s simply a small note that the game you’re currently viewing on the Xbox app “should play great on this PC,” without noting anything about what settings the app recommends, the playable frame rates, or other details. The feature also isn’t available on more than a handful of games, so don’t be surprised to see the message “Performance check not available yet,” too. Microsoft isn’t getting rid of the game’s system requirements, however, if you want additional context.

To access this new feature, download the Xbox Insider Hub from the Microsoft Store. You’ll then need to install the app and manually opt in to previews of “Windows Gaming” apps, which includes the Xbox app, the Game Bar, and Microsoft’s Gaming Services app. Once you do, you should receive the updated Game Bar app automatically, which will implement this new performance option.

While this new feature will certainly help gamers trying to decide whether to take the time (and the bandwidth) to download a new game, keep in mind that PC gamers can now try out many PC games via the new Cloud Gaming option available to Xbox Game Pass Ultimate members, both on the PC and on Xbox. Cloud gaming allows you to jump in and play the game via a remote server, helping guide you on whether to download the game in the first place. The difference, of course, is that cloud gaming also implements a bit of network lag as your keyboard and mouse inputs go up and down to the cloud. It’s here that Microsoft’s performance evaluation within the Xbox app will be helpful, informing you whether a game will deliver a satisfactory experience on your PC.

This story was originally reported by The Verge.