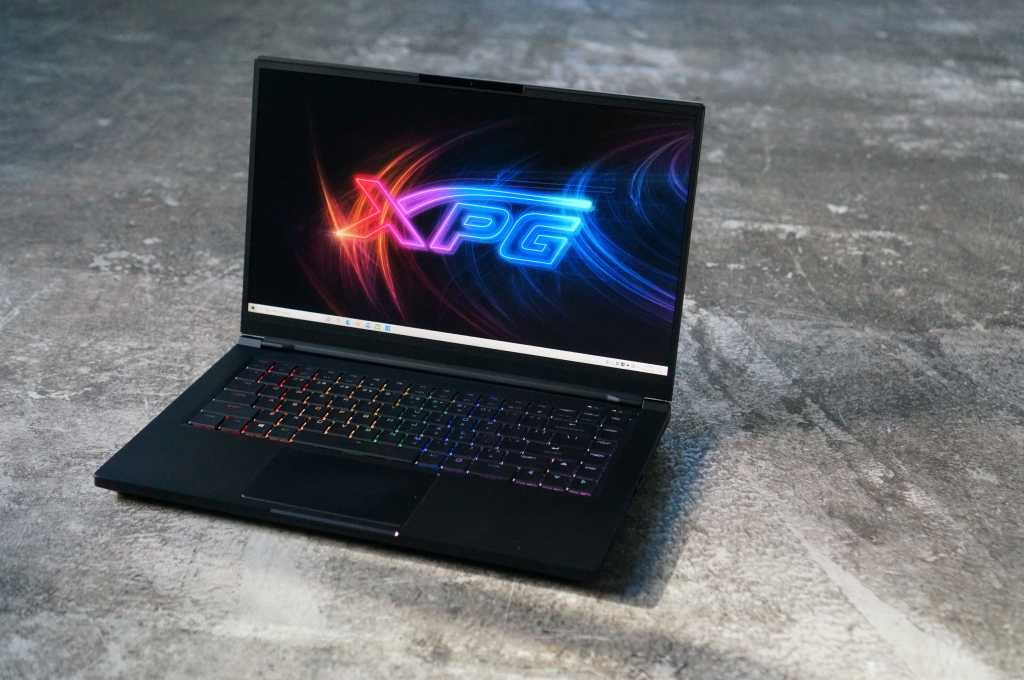 We’ve long wondered if it was simply impossible to have a thin Intel-based gaming laptop that didn’t howl like a banshee or if no one was bothering to even try. That all changes with XPG’s Xenia 15 KC, which is truly the thinnest, lightest and—more importantly—the quietest gaming laptop that we’ve touched.

The Xenia 15 KC will look familiar to many as it is largely built on the same chassis as its predecessor, which we reviewed previously The key changes include a more powerful CPU and GPU, a more useful screen for work, and impressive acoustic attributes.

And we’re not just not throwing out the word impressive either—most of the time the Xenia 15 KC is dead silent where other laptops would be screaming. There’s a cost to the quietness, but not as much as you might expect. First, we’ll walk you through what’s inside the Xenia 15 KC.

Ports: Like the previous design, the Xenia 15 KC features a healthy amount of ports with a lock port, USB-A 10Gbps, and headset jack on the left side. The right side features an additional two USB-A 10Gbps ports and an SD card reader. The SD Card reader is on USB 3.0 and offers the same meh to OK performance as the previous laptop with read speeds in the 90MBps range. We do appreciate that the XPG has placed even more ports on the rear of the laptop including a Thunderbolt 4, full-size HDMI 2.0, Gigabit ethernet port, and DC-in port for the charger.

The keyboard is also unchanged from the previous iteration. The mechanical keys use optical switches and offer a generous 2mm of travel. As the laptop body is magnesium, which helps lower the overall weight, the cost is a single window for the keyboard opening rather than individually cut holes for each key. This means the keys are placed a little closer together than what you might find in other designs. Some may feel the keys are too close together—despite their generous key cap size—but our fat fingers had no issues with it.

Each key is lit with RGB lighting but it’s not very bright. If you’re into the familiar rainbow wave effect—the Xenia 15 KC’s colors flow about as smoothly as jagged pixels in a 1980s console game. That said, XPG officials claim the updated software smooths out the effect. The trackpad is fine as well, but our model had a slight rattle to it, which we’ve seen from many different vendors occasion. It’s likely the tolerance of our unit was not an entire lineup problem.

The webcam is a Windows Hello-compliant biometric camera, which we appreciate as its often a feature overlooked in gaming laptops. It is, however, still just 720p. That means you won’t be getting very good picture quality on Zoom calls. However, despite the lackluster webcam, the audio is much improved from the Xenia’s previous iteration.

The original Xenia 15 sounded thin and was good enough for an email alert chime, but not much else. The Xenia 15 KC has a little more presence but is still just barely adequate, especially when compared to laptop vendors that put so much speaker in them, they almost rattle when cranked up. More speakers also means more weight and a bigger body, though—but for someone looking for the bass—keep looking.

There are two cool features of the Xenia 15 KC that you should be aware of. The first one is its weight. Coming in at 4.2 pounds on our scale, it’s significantly lighter than other laptops with similar specs. Comparable laptops usually weigh about 4.5 pounds or more. The other compelling feature is just how quiet the laptop is.

We’ve long gotten used to gaming laptops that sound like jets taxiing for take off. The Xenia 15 KC, however, rarely makes noise under normal use. Some of that is tied to the laptop’s easily accessible performance mode button, which toggles between the following modes in real-time: battery saver, balanced, and performance. Switch it to performance and the laptop might see an 8dB increase in volume. On default, though, it’s in balanced mode. It also activates its passive cooling mode, which means the fans or fan barely spins up.

How quiet is it? Really quiet. In fact, here’s a comparison of how loud the previous Xenia 15 would get running 3DMark Time Spy versus the current Xenia 15 KC doing the same graphically intense benchmark run. For every 3 decibels, the sound energy essentially doubles. That means older 9th and 10th gen laptops in a similar-size body would all start to scream far sooner and far louder.

The Xenia 15 KC handles CPU-only tasks like a champ, as you can see in the Cinebench R20 chart below. The blue line represents the Xenia 15 KC, which never spikes above 30dBA—the two peaks early on are from a car going down the street outside the home where the test took place. It’s essentially dead silent most of the time with only one fan spinning up to 1,300 RPM. One key difference in the new version is the use of a liquid metal compound over less efficient thermal paste. Liquid metal isn’t the answer to everything, though. We’ve seen many liquid-metal laptops in the past that sound like Huey helicopters, so this is likely due to tuning and design more than anything.

If you’re wondering why the blue line for the Xenia 15 KC’s Core i7-11800H is so much shorter than the orange line for the older Core i7-9750H—it’s because the Core i7-11800H has 8-cores versus the 6-cores of the older Core i7-9750H as well as being based on the newer and much faster 11th gen Tiger Lake H CPU. The Tiger Lake H version simply finishes the same all core task that much faster. Yes, it’s faster while also being quieter too.

To get a better idea of how the Xenia runs lighter tasks like browsing the web or using Adobe Photoshop, we ran the Cinebench R15 benchmark, which uses a single CPU thread or core. The short answer is few can tell the difference between any of these laptops while doing the boring work. Even though the older Core i7-9750H looks meh, most people won’t be able to tell the difference between them.

Cinebench R15 is a 3D modelling benchmark that runs fairly quickly. Modern laptop performance is often constrained by heat, so longer running tasks help shed more light on its actual performance. For this, we use Handbrake to convert a 1080p video file using the Android Tablet preset. In Performance Mode, the Xenia 15 KC finishes the task in about 17 percent less time versus the much quieter Balanced Mode setting. Since our all-core encode takes more than 25 minutes to run—we see the performance between the 8-core Core i7-11800H close up just under 8 percent with the 6-core Core i7-9750H when set to Balanced Mode. In Performance Mode, though, the newer Xenia 15 KC still trounces the older Xenia 15 and is slightly faster than the Dell XPS 17 9710 with the same CPU.

The Xenia 15 KC’s GPU is rated at 125 watt TGP but, with its Dynamic Boost 2.0, it’s capable of hitting 145 watts under some loads. Using 3DMark Time Spy, which is mostly a GPU benchmark, the Xenia fits in with other 3070 laptops. In Benchmark Mode with the fans running 100 percent, we see a significant performance bump that puts it in the neighborhood of some RTX 3080 laptops. Strangely, we’re not seeing much of a difference between Performance Mode and Balanced Mode.

Rise of the Tomb Raider is a 6-year-old game and not exactly very strenuous for these laptops. The Xenia 15 KC does quite well in all modes, really only losing to an Asus ROG Zephyrus S17 with an 11th-gen Core i9 and GeForce RTX 3080.

Our next game is Metro Exodus, which is far harsher than the older Rise of the Tomb Raider. Even though we don’t switch the games’ use of DirectX Raytracing, you can see it shatter any beliefs that a higher TGP RTX 3080 doesn’t pull its weight. Overall, we’d say the Xenia 15 KC does quite well, especially when you consider its svelte build and weight compared to the other gaming laptops here.

Battery life in a laptop this light is important, as you’ll likely want to take it with you. During the battery test, we activated the Xenia 15 KC’s balanced mode using our standard 4K video local file in airplane mode and the brightness in the 250 to 260 nit range. With more than 8 hours of video playback time, the Xenia 15 KC is only eclipsed by the Dell XPS 17 9710—but we’d say both are quite impressive. Several of the laptops here feature compromised battery capacity for laptops with this much hardware inside, so it’s no surprise they are short of the Xenia 15 KC by several hours.

We’ll close out with additional testing on just how warm the Xenia 15 KC gets when its running in its default balance mode which turns on a passive cooling mode. That basically means the laptop will sometimes turn off all of the fans or only run a single fan at 1,300 RPM. That’s quiet enough where you can’t hear that fan unless you put your head to the keyboard. As you can imagine, that means the laptop also gets pretty warm.

To find out how hot it gets, we attached four temperature sensors to the laptop and recorded its temperature while running 3DMark’s Time Spy stress test. The test loops Time Spy 20 times, which can last 10 minutes. It also measures for stability and will flag you if frame rates vary by more than 3 percent from run to run. The WASD keys and the palm rest were 82 degrees or less with the bottom of the laptop getting the hottest.

We did hit a few snags while temperature testing. The fans would decrease in speed and never spin up again, which caused the laptop to reach near dangerous levels of 144 degrees near the bezel and on its underside. XPG officials said this could potentially be a driver issue, which may have been released from Windows Update. The manufacturer recommended we reset the laptop and then try to replicate the problem. After resetting the laptop to its factory settings, we were unable to reproduce the issue again even after installing the drivers and updates from Windows Update.

The main take away is that despite the Xenia 15 KC being extremely quiet under general use, the temperatures are still quite reasonable.

There’s a lot of like about the Xenia 15 KC, but it’s not perfect. The design is a little generic looking for us and doesn’t stand out like the MSI GS66 Stealth, Acer Predator Helios 300, or Alienware X15. All three of those laptops are heavier, though–with some of them considerably heavier at 5 pounds. The main differentiator is just how quiet the Xenia 15 KC runs. As we said, we’re just so used to the fans spinning up on a thin gaming laptop so easily, that we legitimately wondered if something was wrong with this laptop. We’ve just never seen such a thin, powerful laptop run so quiet. Hopefully that’s something other vendors replicate instead of chasing the longest bar on a benchmark chart. If you want a quiet, lightweight gaming laptop, the Xenia 15 KC is hard to beat.