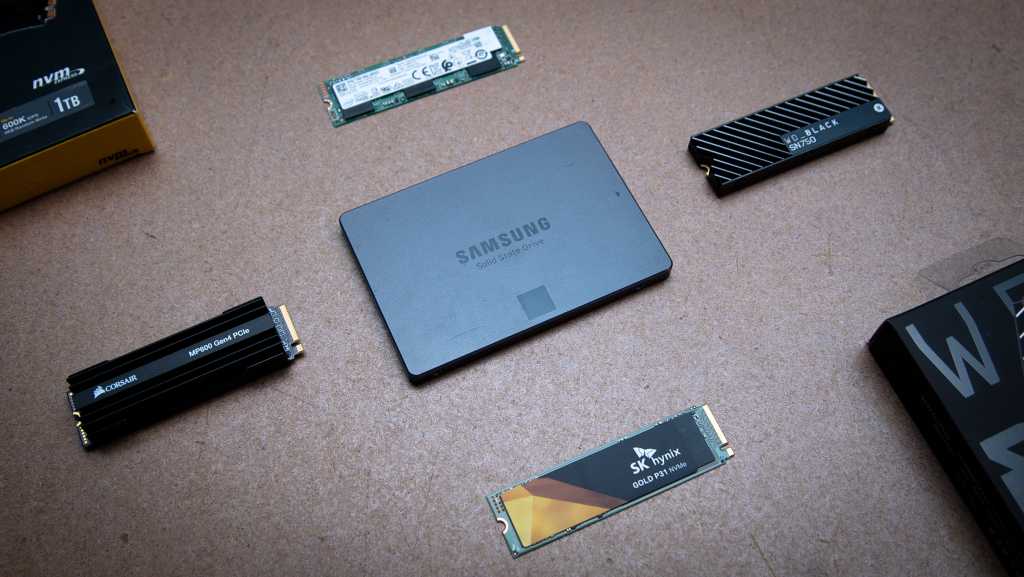 Solid-state drives are universally faster than old-school hard-disk drives, but not all SSDs are the same. They come in different shapes and sizes, have different maximum speeds, and as you might guess, cost different prices.

We explain each type of drive in deep detail in “What type of SSD should you buy?” and also highlight specific recommendations in our round-up of the best SSDs, but that information can be harder to apply when trying to buy a laptop or pre-built PC. Instead, it’s often more important to understand what kind of SSD you’re getting, so that you can decide if it suits your purposes.

To make that simple, we’ve created this quick breakdown for you. Key differences are outlined below, with a full chart at the end for easy side-by-side comparisons. It’s fast reading, so you should be able to get back to your purchasing lickety-split.

SSDs can either use NVMe or SATA as the method for communicating with the rest of a PC. SATA is slower than NVMe.

M.2, on the other hand, is actually a type of form factor. You can find both NVMe M.2 SSDs and SATA M.2 SSDs in the wild.

Sometimes product advertisements or summaries use “M.2 SSD” to imply an NVMe drive and “SATA SSD” to indicate the presence of a 2.5-inch form factor SSD. Because of this, don’t take such phrases at face value. Look instead at technical specs to figure out the approximate speed of a laptop or desktop PC’s storage drive.

NVMe drives are faster than SATA drives. (This is true even if both SSDs are in an M.2 form factor.) Transfer rates depend first on which generation of PCIe connector your NVMe drive uses, and then the individual model.

Currently, the maximum speed for an NVMe PCIe 3.0 (aka Gen 3) SSD is up to 3,500MB per second, while a NVMe PCIe 4.0 (aka Gen 4) SSD can hit up to 7,500MB per second. Manufacturers usually list the theoretical speeds to expect from a particular model, which you can then verify by checking out independent benchmark results.

SATA SSDs typically hit speeds of up to 500MB per second. (However, like NVME drives, performance can vary between individual models.) That may sound astonishingly slow, but compared to SATA HDDs, the difference is still like night and day—a 7,200 RPM hard-disk drive tops out around 160MB per second. Nearly everyone notices a material difference between an HDD and a SATA SSD during basic tasks like document editing or web browsing.

So why choose an NVMe drive over SATA? The advantage becomes tangibly clear when you’re loading or copying files, especially big ones.

In typical laptop and pre-built desktop PCs, NVMe SSDs are usually found in the M.2 form factor. (Other forms exist but they’re far less common.) SATA SSDs can either take the form of 2.5-inch or M.2 drives.

If your laptop has a spare M.2 slot, first check if supports NVMe, SATA, or both before buying a drive.

An example of a SATA SSD available in both M.2 and 2.5" forms