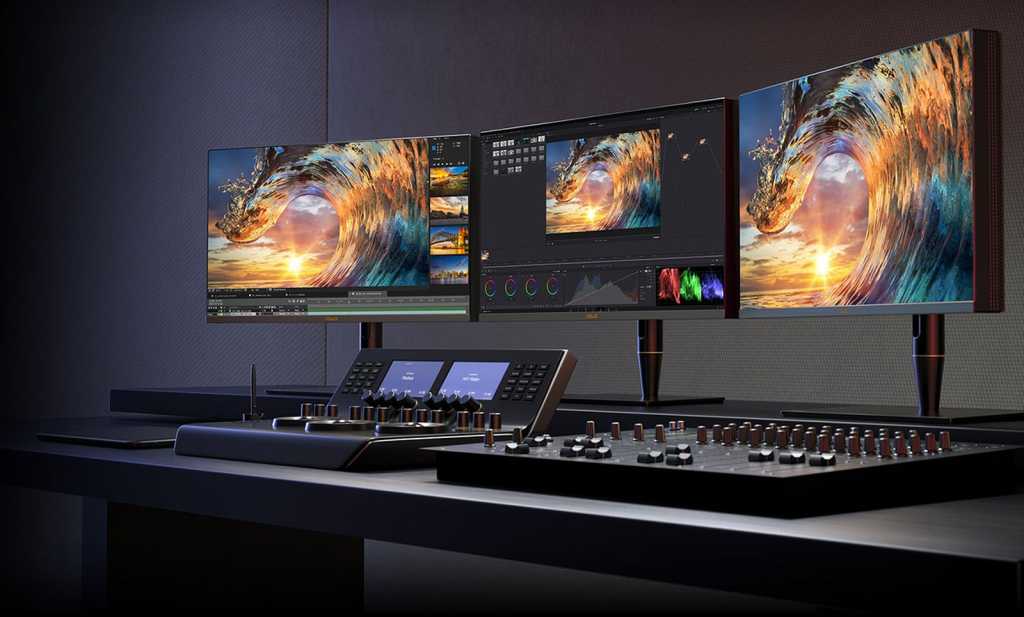 Most modern computer monitors, and even televisions, have an edge-lit LCD display that’s fundamentally similar to the first such displays sold decades ago, but that’s not where the future is headed. The twin threats of Mini-LED and OLED want to conquer the world of PC displays for themselves.

Which will win, and where is the future headed? I spoke with Ross Young, CEO of Display Supply Chain Consultants, and David Wyatt, CTO of Pixel Display (and inventor of Nvidia G-Sync), for the inside scoop.

Mini-LED scores an undisputed and significant win in brightness.

Modern OLED displays rarely exceed 1,000 nits of brightness, and when they do, are incapable of sustaining it. LG’s C9 OLED television, for example, can’t sustain a peak brightness above 160 nits (according to testing by Rtings). Mini-LED displays like Apple’s Liquid Retina XDR, Samsung’s Odyssey Neo G9, and Samsung’s QN90A television can hit peak brightness well above 1,000 nits and sustain at least 600 nits.

Wyatt points to this as a key advantage. The best HDR standards call for up to 10,000 nits of brightness. Current consumer Mini-LED displays don’t achieve this, but it’s possible future displays will.

And Micro-LED, which uses individual LEDs as per-pixel lighting elements, can reach even greater heights. Wyatt says his company’s VividColor NanoBright technology will be capable of reaching up to one million nits.

Such brightness is not necessary for computer monitors or home televisions and instead targets demanding niche components, such as avionics displays. Still, it hints that we’ve only seen a sliver of HDR’s real potential – and that Mini-LED and Micro-LED, not OLED, will lead the charge.

OLED’s greatest strength is the opposite of Mini-LED’s incredible brightness. The self-emissive nature of OLED means each pixel can be turned on or off individually, providing a deep, inky, perfect black level.

“Mini-LED has clear advantages in sources of supply and brightness,” Young said in an email, “but OLEDs have advantages in regards to contrast, particularly off-axis contrast, response times, and no halo effect.” The “halo effect,” also known as blooming, is the halo of luminance that often surrounds bright objects on a Mini-LED display.

The advantages of OLED add up to superior contrast and depth. You’ve likely noticed this when viewing an OLED television at your local retailer. High-quality content has an almost three-dimensional look, as if the display is not a flat panel but a window into another world.

Mini-LED improves on traditional edge-lit LCD displays by improving the backlight. The LCD panel itself, however, is much the same as before and retains some flaws common to the technology.

Display quality can shift significantly depending on viewing angle, and significant blur will be visible when displaying fast motion. Both problems are inherent to LCD technology. The liquid crystals do not block light uniformly, so the image looks different from different angles, and require a few milliseconds to respond to a charge, causing blur or ghosting in rapidly changing images.

OLED is different from LCD technology. There’s no liquid crystals to twist or move. Each pixel is an organic element that creates its own light when a charge is applied. The light is emitted in a relatively uniform pattern and can turn on or off extremely quickly, removing the viewing angle and motion performance issues of LCD entirely.

No matter how you look at it, this is another quick win for OLED.

The last few points—contrast, black levels, viewing angles, and response times—highlight the strengths of OLED technology. But, OLED has a weakness: durability.

Wyatt hammered this point during our conversation. The “O” in OLED stands for organic, and organic material will wear out. Indeed, exposure to light itself (and blue light in particular) wears down OLED, reducing the light produced by pixels over time.

This problem is most often discussed in the context of burn-in or image retention. Burn-in happens when specific pixels on an OLED panel degrade differently from those around them, creating a persistent shadow in the image.

OLED manufacturers downplay this issue. LG said in 2016 that its OLED televisions can endure 100,000 hours before they degrade to half their original maximum brightness. The company’s current OLED reliability page says that “reasonable, responsible usage” should not result in burn-in.

Want to see the effects yourself? I recommend Rting’s burn-in testing page, which shows results over a period of eight years (though, unfortunately, Rtings has not updated its result since February of 2020). This testing shows OLED degradation is indeed a thing, though its severity depends on how you use your display.

You might decide the risk is worth the reward. But if you want a display that you’ll use all day, day after day, for a decade or more, OLED isn’t the best choice. The burn-in is real.

Monitor pricing remains a sore point for PC enthusiasts. As explained in my deep-dive on upcoming OLED monitors, pricing is tied to the efficiency of production.

“OLEDs are less costly than MiniLEDs in tablets and notebooks if comparing them to Apple’s iPad Pro and MacBook Pro,” says Young. “On the other hand, in monitors, OLEDs are more expensive than MiniLEDs, and are not as bright.”

This explanation is backed up by the hardware you can buy today. OLED panels are available at reasonable prices in notebooks like the Dell XPS 13 and Samsung Galaxy Book Pro. OLED panels for monitors, on the other hand, are so expensive most manufacturers don’t even bother. The LG UltraFine 32EP950, which briefly went on sale this summer, retailed for $3,999.99.

This advantage will likely continue in the near future. OLED pricing is reliant on availability of OLED panels, which are not as widely produced as LCD panels. Companies looking to build Mini-LED displays can design the backlight somewhat independently of the LCD panel and choose panels as needed based on the panel’s capabilities and pricing.

Because of this, there’s more ways for manufacturers to deliver Mini-LED displays in notebooks and monitors, which may lead to a more aggressive reduction in price.

I call this a win for Mini-LED, though only with stand-alone monitors (for now).

But what does the future hold?

OLED’s big break may come with the introduction of new fabs. Young says they will “lower costs significantly for 10-inch to 32-inch panels, giving OLED fabs the same flexibility as G8.5 LCD fabs, meaning the ability to target multiple applications from a single fab.” The first of these new fabs should start producing panels by 2024.

Affordable OLED seems alluring, but Wyatt champions a different approach. He believes the Micro-LED technology championed by Pixel Display will meld the strengths of LCD and OLED while ditching the weaknesses of both.

However, Micro-LED is a technology more relevant to the latter half of this decade. The more immediate fight will see OLED attempt to improve brightness and durability while Mini-LED pursues increasingly sophisticated backlights to mimic the contrast of OLED.

Personally, I think Mini-LED shows more promise—when it comes to PC displays, at least. The static images, long hours, and sustained brightness of Mini-LED displays pinches on OLED pain points, which will remain even if pricing becomes more affordable.