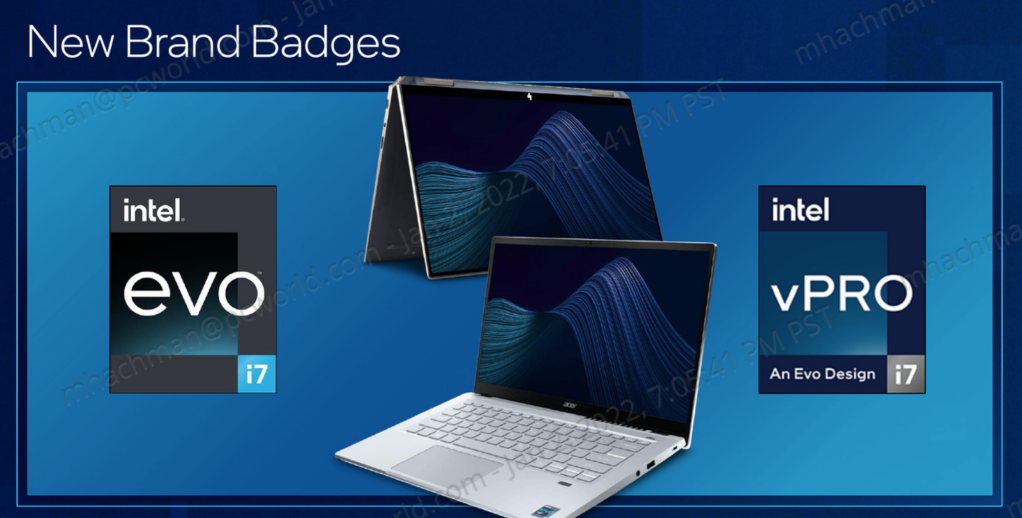 As Intel moves into the third generation of its Evo premium brand, the company is drastically expanding its reach. It’s now diving into new areas such as business notebooks, peripherals, desktops, and devices with folding displays.

Naturally, Intel’s latest iteration of the Evo brand is built upon the company’s 12th-gen Core processor, Alder Lake. But, according to Josh Newman, vice president of the Client Computing Group and general manager of mobile innovation, new Evo features will include Wi-Fi 6e, higher-resolution webcams, and more. The CPU manufacturer made the announcements at CES 2022, where the company announced new 12th-gen “Alder Lake” CPUs for laptops, plus an expansion of its Alder Lake processors for desktop PCs. Intel also said that it has begun shipping its Arc GPUs, too.

Intel founded the Evo platform as a successor to Project Athena, the co-development initiative that it formed with PC makers a few years ago. According to Newman, over 5,000 engineers from Intel and its partners have worked together on Athena, indirectly influencing a total of 2,000 different designs. Today, over 100 Evo designs have shipped and Intel is targeting about the same amount for the next generation of Evo laptops.

To be approved for an Evo logo, each laptop must already satisfy Intel’s criteria for what it calls key experiences: how quickly it wakes from sleep, how fast it charges, and whether it can run all day on a single battery charge. To this, the chip manufacturer is adding intelligent collaboration.

This means Intel is going to be working with PC makers to enhance apps like Zoom, Slack, Google Workspace, and more. It will be working with PC makers to develop AI-based background noise cancellation and AI accelerated camera imaging effects all across WiFi 6E. It’s also including what it calls the Intel Connectivity Performance Suite, a piece of middleware that interacts with the hardware components. Essentially, the PC’s performance will be optimized so that the video call gets priority in terms of network packets.

Intel has also beefed up its existing umbrella requirements like long battery life to encompass specific scenarios. In this case, it’s adding a requirement where battery life is tested when a user has Bluetooth peripherals connected.

Intel’s third-generation Evo brand will now encompass more powerful gaming laptops and productivity devices, specifically 12th-gen Core H-series laptops that can run at between 35W and 45W. Evo laptops will also accommodate larger screens, such as 15- and 16-inch displays. Interestingly, these new laptops will still have the same battery-life requirements as productivity laptops, which is roughly nine hours. Businesses will also be able to use Evo laptops with the newly designed “vPro: An Evo Design” brand.

Peripherals will also receive the Evo treatment. Intel already launched a small “Engineered for Intel Evo” program with a few Thunderbolt docks, but Newman said that program will be expanded to include Thunderbolt devices and some Bluetooth peripherals, presumably headsets. Newman also mentioned Thunderbolt displays might be added as well. The company will be testing Thunderbolt monitors for wake time or SSDs for how quickly they connect, all in the service of a “seamless” experience where a user lifts an Evo laptop’s lid and the whole system automatically turns on.

Separately, Intel is actually adding Evo support for foldable displays, though Newman described it as very “proof of concept” at the current time. A foldable display spec is expected to roll out in 2022.

Interestingly, Intel has begun to adapt some of the design initiatives it pioneered for mobile onto the desktop. The chip manufacturer launched “Project Athena” in 2019 to accomplish two goals: work with PC markets to co-develop premium notebooks and then later communicate this to consumers using the “Evo” brand. Now, it’s working with desktop makers to accomplish some of the same goals, focusing first on vPro-certified desktops for businesses.

“We focused on how we can make the desktop experience more immersive to help business users to be more productive and collaborative,” said Mandy Mock, vice president of Intel’s Client Computing Group and general manager of its desktop business, in a briefing with reporters. “This user experience evolution results in a new class of expert desktops for business users.”

Intel’s four “pillars” underscoring the Project Athena initiative continue to include “privacy” with walk-away-and-lock functionality designed to protect data, “prepared” PCs that can sense your presence and authenticate you, “engagement” where PCs will use AI to reduce noise and improve the overall experience, and smaller, “sustainable” form factors that meet EPEAT goals. What the CPU manufacturer is doing to communicate these requirements to the consumer is less clear, however. Newman said that the “Athena” requirements didn’t necessarily imply that Intel would develop a brand name supporting them.

Not all of these initiatives are supported by current hardware, Intel executives said, especially foldables. But they’ll certainly guide the evolution of PCs, including notebooks and desktops, into 2022 and beyond.