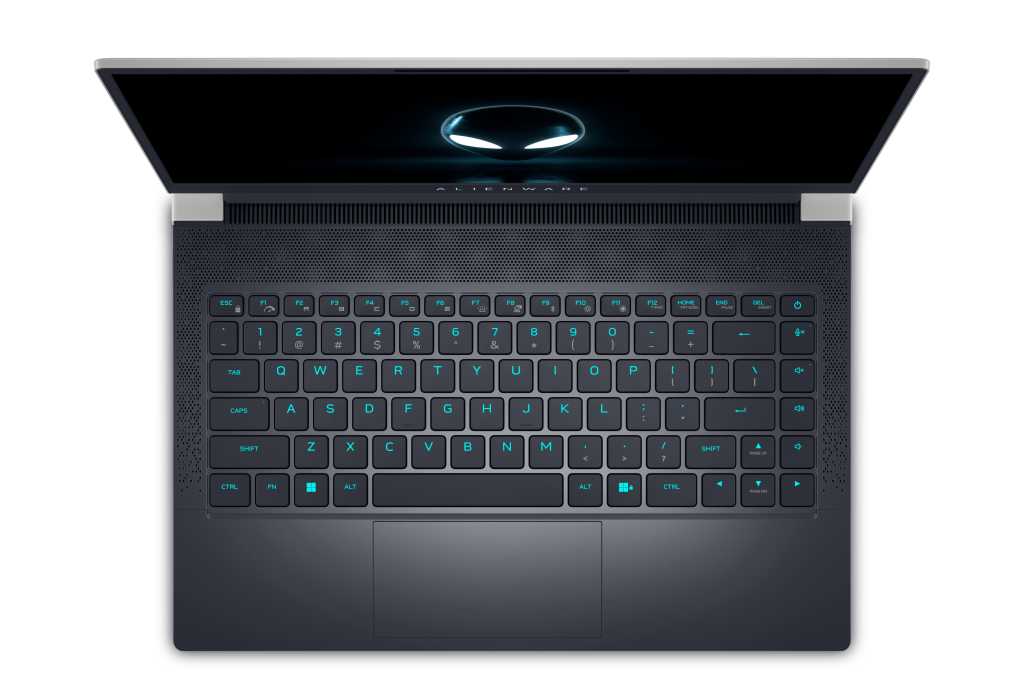 Can you make a thin gaming laptop without sacrificing performance or gaming features you’ve come to expect? Alienware says its new x14 does just that while claiming to be the “world’s thinnest gaming laptop.”

By gaming features we mean such luxuries as a 14-inch 1920×1080 144Hz screen with G-Sync Advanced. G-Sync Advanced, if you don’t know, lets the laptop automatically switch between a direct connection from the GPU when running on AC to a hybrid GPU mode to save power on DC or reduce latency when plugged in.

The laptop’s body is made of a combination of aluminum and magnesium panels but Alienware points to the “dual-torque” hinge it used in the x14 to help it achieve a 0.57-inch, or 14.5mm, profile. For reference, consider that gaming laptops are usually happy to hit 20mm of thickness. Besides being impressively thin it’s also pretty lightweight, starting at 3.96 pounds and reaching 4.06 pounds, which is most likely due to the added weight from additional cooling in the higher-end version.

As an Alienware laptop it doesn’t skimp on hardware either. For the all-important GPU it features a GeForce RTX 3060 with 6GB of GDDR6 and a thermal rating of 85 watts (60 watts base plus 25 watts of Dynamic Boost 2.0) at the top-end. Lower-cost configurations offer a GeForce RTX 3050 4GB or an RTX 3050 Ti.

For CPU, you can opt for a 14-core Core i7-12700H or a 14-core Core i7-12900H. The former will hit a boost clock of 4.7GHz while the Core i7-12900H can reach that magical round number of 5GHz. That high boost clock is aided by the use of Alienware’s Element 31 thermal interface material that’s based on an encapsulated gallium. On the top-end RTX 3060 configurations, Alienware also uses a vapor chamber rather than traditional heat pipes. All x14 laptops also feature fan control so each fan can be independently spun up or slowed down depending on the load. Most laptops tend to run all fans at the same speed.

Although Intel’s 12th-gen Alder Lake supports a menu of RAM including DDR4, LPDDR4X, DDR5, and LPDDR5, in a nod to the portable nature of the x14, Alienware will opt for LPDDR5/4800 or LPDDR5/5200 depending on the GPU. Besides using far less power in standby than DDR4 or DDR5, LPDDR5 requires RAM soldered to the motherboard to achieve the low idle-power states. Of course, the other benefit of using soldered RAM is that it helps make the laptop thinner. Granted, soldered RAM also has its drawbacks—namely the inability to be upgraded. Alienware’s decision to go with PCIe NVMe SSD options ranging from 256GB to 2TB is a solid one.

One other notable feature of the x14 is its charging system. Most gaming laptops still run the familiar DC-in jacks but Alienware finally embraces USB-C charging with Power Delivery—just not in the way you’d expect. We anticipate USB-C charging in gaming laptops to become more common now that a new 240-watt USB-PD spec is here. But it’s still likely too early for that, hence the x14 sticks to the current USB-PD spec with its 100-watt max. Alienware does run the x14 on more power, using a 130-watt USB-C charger that we’ve seen with Dell’s XPS 15 and XP 17 series. That’s a little surprising to us since we typically expect 180-watt power bricks for a GeForce RTX 3060 GPU, but we have no insight into the needs of Intel’s 12th-gen mobile Alder Lake either.

Unfortunately, we’ll have a long wait to find out. The Alienware x14 is slated to go on sale starting at $1,799 this winter. Yes, this winter. So you can simply mutter “winter is coming” for the next several months before you can get your mitts on it.